I first watched Freedom Writers when I was in the 8th grade. My social studies teacher showed it to us as part of a lesson. I can’t recall the reason, but there was one scene in particular he showed us. I think he was teaching us about race relations or something. I didn’t see the full movie until a year or two later in a different school year. I always thought Freedom Writers was much older than 2007. It feels like an early 2000’s movie. But enough about that. How does Freedom Writers hold up? I think it’s the perfect movie to teach in the classroom. Based on a true story, Freedom Writers tells the story of a white teacher who inspires her multicultural students to express themselves. They write things down in a diary and learn about the Holocaust. The main difference between the movie and real life is how the actors look. Hillary Swank is a bit more Hollywood pretty then the teacher she’s portraying. I think they also simplify the stories a bit just to save time. When it comes to movies about race, I prefer movies like Freedom Writers. That are straight forward, easy to watch, and make you feel good. 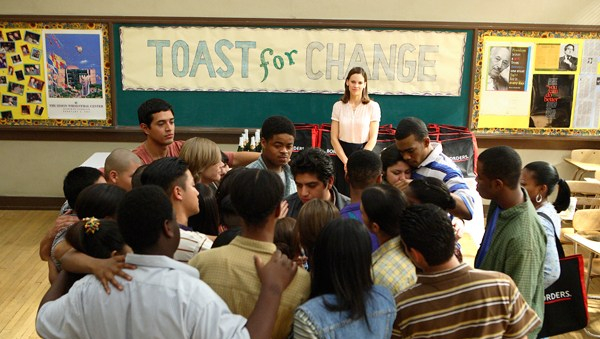