Back to the Future is my all time favorite science fiction movie. Although it wasn’t always on my “Top 10 Favorite Movies” list. I originally had a very different movie in its place. A movie I loved, but didn’t feel needed to be on my list. The only movie I could think of to put in its place was also my favorite 80’s movie. Which is of course Back to the Future, that I put in my number seven slot. How I discovered Back to the Future in the first place is a bit of an all over the place story. I’m fairly certain I discovered it was part of a trilogy before I could think it was just a standalone movie. My parents had the third movie on VHS and I was curious about it. So my mom told me about the first movie. Like most kids, I imagined it differently then what it actually was. I don’t know why, but I originally pictured it as some kind of mad scientist story. I finally saw Back to the Future when it came on TV and I watched it with my mom (which if you know the movie, can be a bit awkward) and brother. Taking no time at all, I became a huge fan of Back to the Future. Watching it anytime it came on and eventually buying a trilogy pack on DVD. Now its almost become an annual tradition for me to see the trilogy every year… 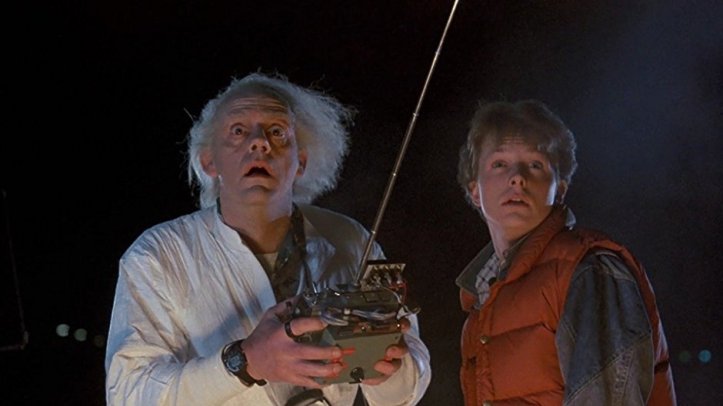 Back to the Future is all about time travel. It takes place in the year 1985, in the town Hill Valley, and follows the exploits of Marty McFly. A teenager who loves skateboarding, rock n’ roll music, and his girlfriend Jennifer. His family is a mess and his principal thinks he’s a slacker. With no explanation, Marty is friends with Dr. Emmett “Doc” Brown. A scientist who works on all sorts of inventions. Like an automatic dog feeder (for his dog Einstein) or an enormous amplifier, but his biggest accomplishment is inventing time travel. By inventing the Flux Capacitor (which makes time travel possible), loading plutonium to charge 1.21 gigawatts of energy, and making the time machine out of a DeLorean. “If you’re gonna build a time machine into a car, why not do it with some style?” Which makes the DeLorean the first ever time machine on wheels. After a deadly run in with terrorists, Marty unknowingly travels 30 years in the past to the date November 5, 1955. Where a young Doc and Marty need to figure out a way to get him back to the future. Unfortunately Marty runs into several snags that make it exceedingly difficult. Apart from sticking out like a sore thumb, Marty needs to bring the DeLorean to 1.21 gigawatts, and since plutonium is hard to come by, it requires a bolt of lightning. Which they know will arrive at a precise time when lighting hits their towns clock tower. As if that wasn’t hard enough, Marty’s biggest problem is with his parents. Who he accidentally prevented from meeting and falling in love with each other. Now Marty’s mother Lorraine has fallen in love with him and his father George is too much of a pushover to do anything about it. Meaning Marty can be erased from existence. The movie’s biggest antagonist would be the bully Biff. Who constantly bullies George and harrasses Lorraine. With Marty’s help, he can bring his parents together and travel back to the future all on the same night. Now that you know the story, this is why it’s my all time favorite science fiction movie…

The Delorean travels in time

Back to the Future is not just a great science fiction film. It’s a great teen movie, 80’s movie, time travel movie, and even comedy movie. Back to the Future is the kind of movie everybody loves no matter what. I can watch it several times and always be on the edge of my seat hoping Marty makes it to the future. Michael J. Fox is truly the only actor who can pull off Marty McFly. It’s a good thing Eric Stoltz, the original actor cast, didn’t continue to play him. I’m sure he would have been ok, but Michael J. Fox was born to play Marty. Just like Christopher Lloyd was born to play Doc Brown. His wide eyed eccentricities make Doc one of the most beloved movie scientists of all time. Back to the Future takes full advantage of its time travel aspect. The 50’s is the perfect time for a teenager from the 80’s to travel to. Since teen culture was at the forefront of both. All the time period jokes are hilarious. Whether Marty is inventing a skateboard or giving Chuck Berry inspiration for “Johnny B. Goode.” There’s also a lot of information and small details that pay off nicely. But it’s Robert Zemeckis sense of wonder and enjoyment that makes Back to the Future particularly easy to watch. Can you believe several film studios rejected it? Some studios thought it wasn’t edgy enough. Since so many 80’s teen movies were R rated at the time. They wanted it to be more risqué. While Disney ironically thought it was too risqué already. Since the movie involves a mother falling in love with her son. It’s a little creepy, but it’s not like Lorraine knows Marty is her son. It’s actually more funny than anything. Back to the Future is filled with iconic moments. The first time you see the DeLorean is like being a kid again. Of course it helped boost car sales. Anytime the DeLorean travels in time is epic. By flashing beams of light, disappearing, and leaving a trail of burning tire tracks. There’s also anything involving the “Enchantment Under the Sea” dance. George punching out Biff always gives me chills, Marty playing “Johnny B. Goode” is timeless, and his parents kiss is perfect. In the end, Back to the Future is relatable to anyone, because our parents are more like us then we realize. When Marty travels back to the future, he also ends up making Doc’s, his parent’s, and his sibling’s lives better. By giving them exactly what they needed. All it took was time travel and the power of love. 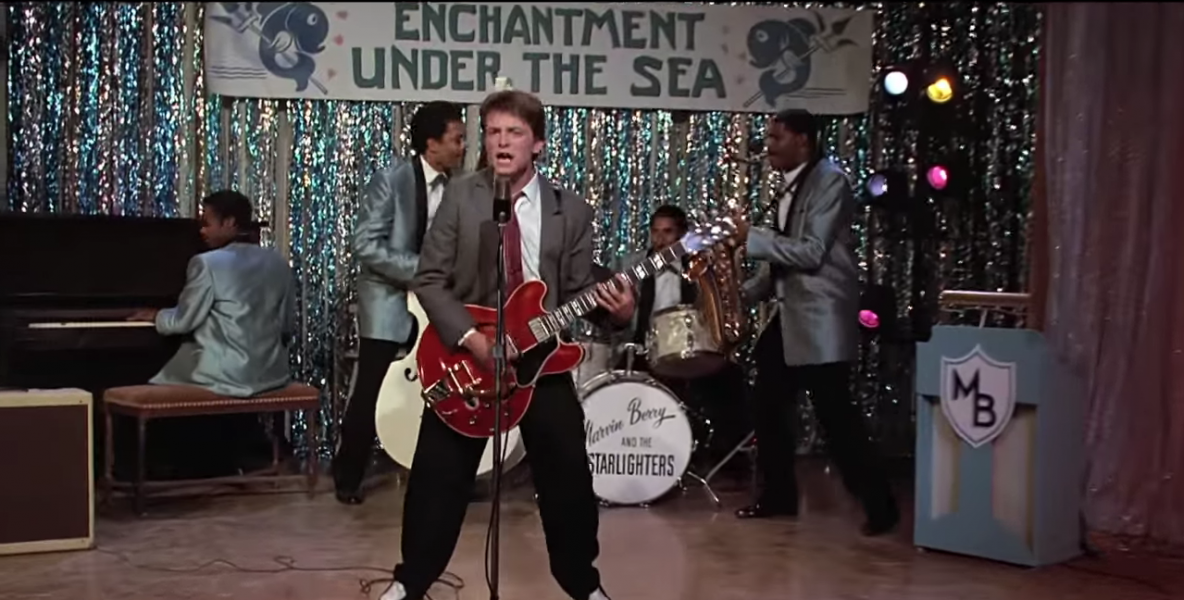 Followed by: Back to the Future Part II