Forgetting Sarah Marshall is all about trying to move on from your ex. Something most people can relate to. Unless your ex just so happens to be a famous TV star. Forgetting Sarah Marshall was always a comedy I was more curious about then others. Even though I wasn’t the biggest fan of Judd Apatow productions or Russell Brand. Whether it was the intriguing premise or the lovely Kristen Bell and Mila Kunis. I just knew I wanted to check it out. Forgetting Sarah Marshall makes use of its R rating immediately. When Sarah Marshall breaks up with her composer boyfriend Peter played by a full frontally naked Jason Segel. His dream is to make a Dracula themed rock opera starring puppets (what is it with Segel and puppets?). Sarah Marshall is known for her role on a terrible show called Crime Scene: Scene of the Crime. Rather then continue his downward spiral, Peter instead retreats to Hawaii. Where he meets new girl Rachel working at the resort and Sarah Marshall also happens to be there. The movie makes great use of its beautiful tropical setting. While the humor is mostly derived from cutaway gags. Along with the usual Apatow staples like Jonah Hill, Paul Rudd, and Kristen Wiig in the unrated version. The biggest stand out character is easily Aldous Snow. A rock star guru Sarah marshall is dating. In the end, Forgetting Sarah Marshall turns out to be a lovable raunchy take on love loss and love again. 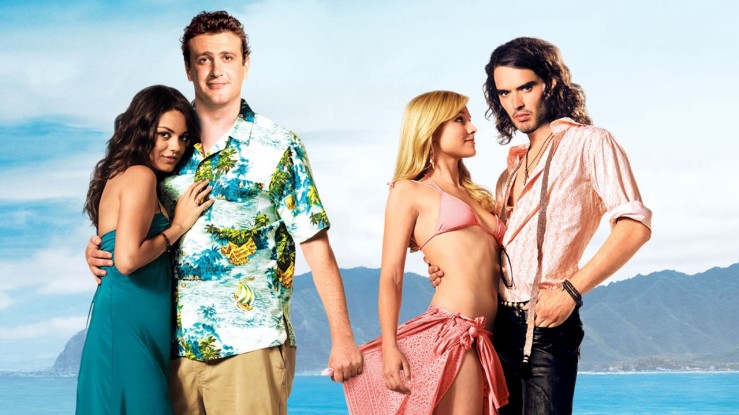