Happy Death Day 2U is a serious case of déjà vu. With a really clever title. Since the sequel to Edge of Tomorrow seems to be on an indefinite hold, Happy Death Day is the first time loop movie to get a sequel. Something I had no idea how to react to the first time I heard about it. I loved the first movie, but I certainly wasn’t thinking it would get a sequel. How do you make a time loop sequel without repeating yourself? Well this is what Happy Death Day 2U does. It takes place right where the first movie left off. Only this time from the perspective of the roommate that walks in on Tree and Carter. It turns out he is now experiencing the time loop. Where an unexpected new Babyface killer is after him. Once Tree is made aware of what’s happening, she discovers what was causing the loop in the first place. Let’s just say the explanation is present in the first movie. Tree winds up back in the loop herself and must now figure out a way to get back while also avoiding another new Babyface killer. The spoilerific first trailer made Happy Death Day 2U look absolutely ridiculous. With even sillier death scenes than before. As it turns out, the stronger focus on comedy and romance is perfectly balanced with its horror. Along with the inclusion of science fiction elements. Jessica Rothe gives another great performance and so do the minor characters that are given way more screen time. Happy Death Day 2U convinced me that sequels to time loop movies don’t have to be repetitive. 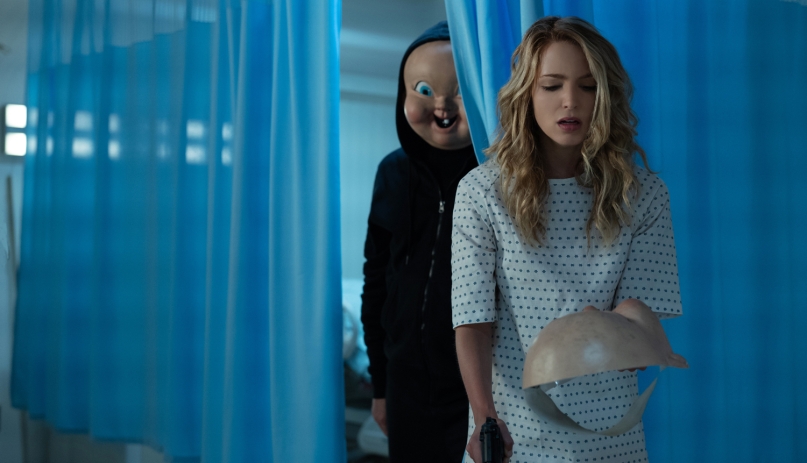 Tree (right) doesn’t realize the killer (left) is behind her