Never Say Never Again is not an official Bond film. No matter how often people mistake it for one. It wasn’t distributed by Eon Productions. That’s why it doesn’t use trademarks like a gun barrel or opening credits sequence. Or why M, Q, and Moneypenny are played by different actors. It can all be traced back to Thunderball. The trivial legal dispute allowed Kevin McClory to make another adaptation of the story. Essentially making it a remake. After Diamonds Are Forever, Sean Connery vowed never to play James Bond again. Until his wife told him to never say never again. Despite being in his 50’s at the time, Connery returned to the role of 007 one last time. Never Say Never Again once again follows a plot involving warheads and water. Perpetrated by Maximillian Largo. SPECTRE and Blofeld return, because it’s now legal for them to. Bond has gotten a bit rusty in his old age, but since he’s the best actor to play the British spy, Connery is just as capable as ever. The movie still contains an original song (by Lani Hall) and the usual gratuitous amount of sex and violence. Fatima Blush fills in the role of femme fatal and Domino Petachi fills in the role of Bond girl. Kim Basinger delivers a breakout performance as Domino. Her most memorable scene is of Bond giving her a steamy massage. The gadgets are also back and just as useful as ever. Due to its unofficial status, I watched the film long after finishing the official films, but I can see the value in it. Never Say Never Again came out the same year as Octopussy, and I think it’s clear which one was the bigger success. 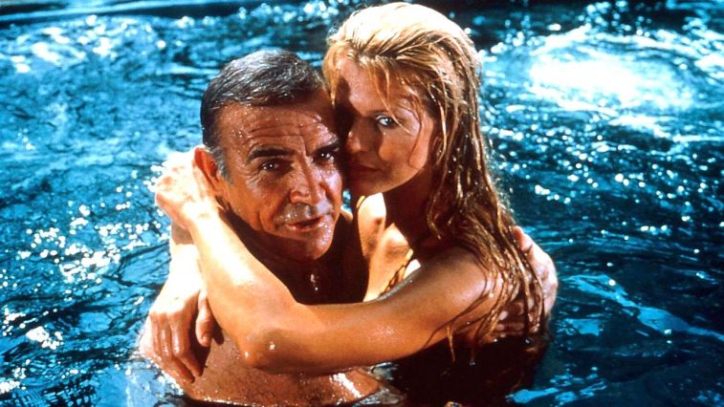 James Bond and Domino swim together