Curse of Chucky finally brings Chucky back to his horror roots. After Seed of Chucky turned him into a joke, there hadn’t been a Child’s Play movie in nearly a decade. Most people assumed they would have made a remake by this point. Instead they surprised everyone with another sequel and despite being direct-to-video, it turned out really good.

Curse of Chucky takes place 9 years later, when a mysterious package winds up in the possession of Nica. A woman in a wheelchair played by Brad Dourif’s daughter Fiona. Her unique characterization and link to Chucky quickly made her one of the series best characters. The package in question obviously contains a “Good Guys” doll. Although it looks brand new, an increase of death slowly makes it obvious that Chucky’s back, and he means business.

SPOILER ALERT! Not only is Chucky back, but his stitches are as well. They were hidden under a layer of plastic. While Chucky’s motivation is actually linked to his previous life as Charles Lee Ray. Which ultimately lead to his death. In the end it’s revealed that Tiffany is also still around and helping Chucky take revenge on the people who wronged him. As if that wasn’t enough, Andy finally returns as well. Curse of Chucky is the tense Chucky movie they needed from the start. With plenty of callbacks to keep fans invested. 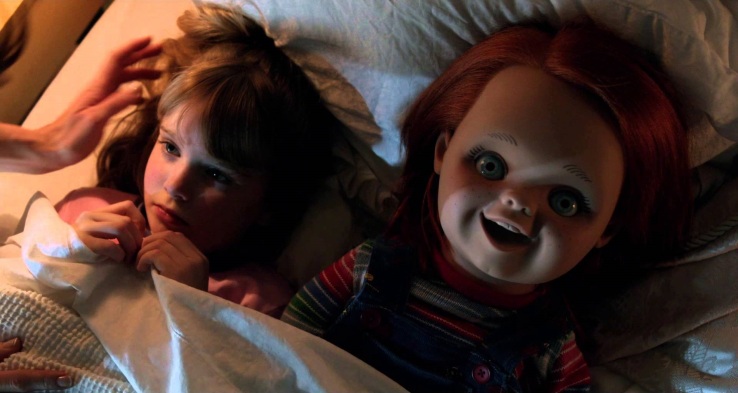 Alice sleeps with her Chucky doll

Preceded by: Seed of Chucky & Followed by: Cult of Chucky