Charlotte’s Web (2006) is the equivalent of a modern live-action Disney remake. Bare in mind that this is still a Nickelodeon movie. I just find the similarities to be too much to ignore. While E.B. White’s other story Stuart Little was first done in live-action, Charlotte’s Web was a different story. Instead they chose the easier route of animation. So several years later in a move that surely drew Babe comparisons, a live-action remake was released.

I was immediately on board with seeing it, but I didn’t for a very frustrating reason. My brother’s fear of spiders made it impossible for us to go see the movie. Then I got really upset when he told me he saw the movie in school with no problems. Needless to say we watched the movie the very same day. Charlotte’s Web (2006) isn’t a musical. It also uses CGI for characters that are a bit trickier to train in real life. Specifically Templeton and Charlotte. Charlotte’s appearance is actually a lot less creepy than you’d expect. She only has 2 normal sized eyes with the other 6 being smaller. As I expected, Dakota Fanning plays Fern. She takes care of Wilbur until he’s old enough to go to Zuckerman’s farm. Although Wilbur maintains a child’s voice.

The barn is made up of a surprising amount of talent with the likes of Steve Buscemi, John Cleese, Kathy Bates, Robert Redford, Oprah Winfrey, and Cedric the Entertainer. Julia Roberts is a pleasant surprise as Charlotte. And her web of messages for Wilbur is just as miraculous in live-action. Her death hit me just as hard as the original. Charlotte’s Web (2006) and its simple tale of a spider’s love for an innocent pig works in any medium. 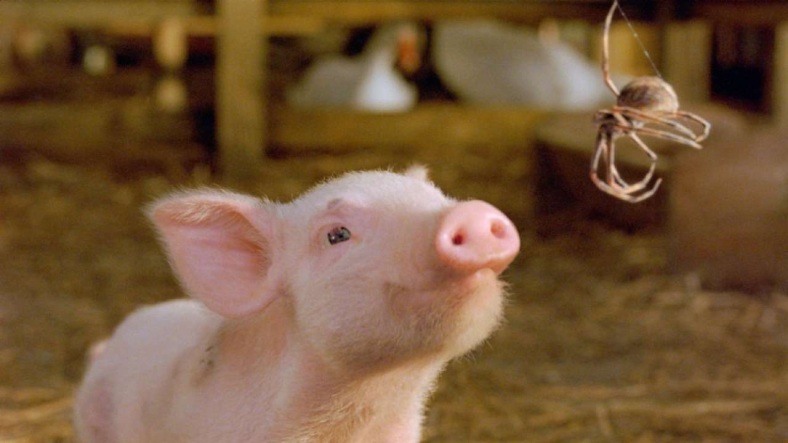