Die Hard with a Vengeance turns Detective John McClane into a run of the mill action star. And there’s absolutely nothing wrong with that. No matter what critics might have said. In order to avoid repeating themselves, Die Hard with a Vengeance doesn’t take place during Christmas, isn’t confined to one location, and allows McClane to work closely with someone else. All of which would become the norm moving forward.

Despite the changes, John McTiernan still returned to direct after not directing Die Hard 2. Like the other movies though, the story is repurposed from an unrelated work. The first unproduced script was too similar to Under Siege. So they instead went with one titled Simon Says (after Lethal Weapon rejected it). Die Hard with a Vengeance finally shows McClane’s police headquarters in New York. After falling on hard times. He’s divorced, fired, and drunk, but a new terrorist threat brings him back. Let’s just say McClane’s past comes back to haunt him when the terrorist Simon gives him orders, or else face the destruction of New York landmarks. One particularly risky order puts him face to face with Zeus. A very reluctant Harlem shopkeep who’s forced into this “Simon Says” mess.

If the nonstop city wide action doesn’t help, then Bruce Willis and Samuel L. Jackson’s chemistry definitely does. They work off each other well, whether they’re allies or enemies. Jeremy Irons can’t compete with Alan Rickman, but he comes awfully close. Although it originally had a far less climactic ending, the actual ending is just as explosive as ever. “Yippee-Ki-Yay” indeed. Die Hard with a Vengeance is all about the action. 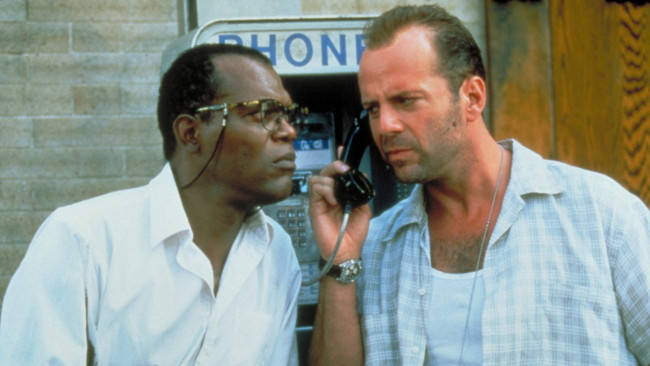