Terminator 2: Judgement Day is one of the greatest sequels ever made, because it took its story and did something unexpected with it. In a very similar way to what James Cameron did with Aliens. The only difference is this was a sequel to a movie that he directed. Rather than a sequel to someone else’s work that he was putting his own spin on. Although my viewing of the Terminator films was out of order, I still recognized Terminator 2 as the best in the franchise. In a weird way, it’s sort of the most kid friendly installment and the one my parents let us watch the most. It was far more heavily marketed to kids with toy commercials and everything. Terminator 2 was such a success that it became the highest grossing R rated movie at the time. It also won 4 out of 6 Academy Awards. Best Makeup, Sound, Sound Editing, and of course Visual Effects. This is actually when the iconic Terminator theme was first heard. The CGI was groundbreaking for 1991 and this is probably Arnold Schwarzenegger’s best performance. James Cameron’s clever twist to make the Terminator a hero would have been shocking. If only the trailer didn’t give it away… 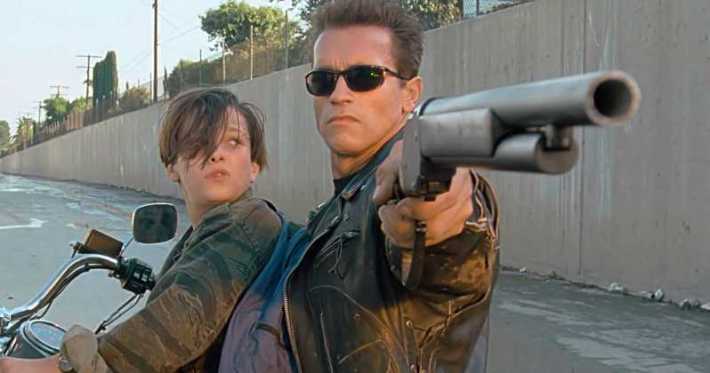 Terminator 2: Judgement Day was released in 1991, but it actually takes place in 1995. Which is only 2 years before the titular “Judgement Day” on August 29, 1997. That’s when Skynet is supposed to strike back at humanity with nuclear warfare. Despite already knowing who’s on what side, the first act still does a good job at building suspense. The best thing about playing a machine is that you can always come back as a different Model. So Arnold Schwarzenegger now plays a different more lean T-800 Model 101. The new Terminator first arrives near a bar. It’s a classic scene that ends with it donning the trademark leather jacket and shades. Even picking up a motorcycle and rifle for good measure. Truly “Bad to the Bone.” At the same time, another Terminator arrives with a police officer investigating. Under the guise of a friendly cop, the mysterious Terminator searches for the now 10 year old John Connor. He’s a little punk that acts out and lives with a foster family. Since his mother Sarah has been institutionalized. Linda Hamilton’s muscular body transformation is still impressive. Sarah is also a bit crazier and being treated by Dr. Silberman. The psychiatrist who diagnosed Kyle Reese in the first movie. Both Terminators begin to converge on John until the big reveal where the T-800 tells him to “Get down!” Robert Patrick gives a chilling performance as the T-1000. A far more advanced Model composed of “mimetic polyalloy” aka liquid metal. It makes the T-1000 a far more intimidating threat, because it can shapeshift into anyone and create knives & stabbing weapons. Terminator 2 has some of the best set pieces in any action movie. The semi-truck chase is awesome from the  gun flipping to the big explosion at the end. The rescue at the mental hospital is a tense reunion that gives the Terminator the famous line “Come with me if you want to live.” After another exciting chase, the T-1000 disappears (unless you’ve seen the extended cut). From there the sequel’s most unique inclusion is explored. That of the Terminator’s fatherlike relationship with John. Edward Furlong isn’t always likable, but this is what gives the film its heart. As the killer robot learns to be more human. Meanwhile Sarah’s constant nightmares about Judgement Day force her to hunt down Miles Dyson. A Cyberdyne director who inadvertently creates Skynet. It’s a traumatizing scene, but it does have a good payoff. Together Miles, Sarah, John, and the T-800 destroy Cyberdyne. All that’s left is the T-1000 now disguised as a police pilot. The climax in the steel mill has many twists and turns, but it’s always satisfying to see the T-1000 blown up and melt in a vat of molten steel. The Terminator’s goodbye to John is one of a few action movie moments to make people cry. Terminator 2 wouldn’t be the success it is without its game changing special effects. The T-1000’s morphing and liquid metal form are still seamless to this day. Even the T-800’s battle damaged makeup has gotten better. As for Arnie’s one-liners, he was somehow able to turn a cheesy phase like “Hasta La Vista, Baby” into one the most badass lines in movie history. Every risk James Cameron took helped make Terminator 2: Judgement Day a sequel that truly surpasses the original.

Preceded by: The Terminator & Followed by: Terminator 3: Rise of the Machines