Snow White and the Seven Dwarfs is the first feature-length animated motion picture ever released. As well as the first movie made by Walt Disney. Making it the most important animated Disney movie of all time. Without its success, the powerhouse studio wouldn’t be what it is today. I’ve been a huge fan of Disney my entire life. While before I only touched on my love for Disney, it’s finally time for me to go back to the beginning and talk about the true classics. What better place for Walt Disney to start then a timeless fairy tale.

Snow White and the Seven Dwarfs is based on the quite dark Brothers Grimm tale Snow White. In the original story, the Queen is Snow White’s birth mother, she wants to consume her lungs & liver, the Seven Dwarfs are nameless, the apple is simply dislodged, and the Queen dies a more graphic death. This was the first instants of Disneyfication in a movie. Before Disney was known only for short films. People were so certain the movie would fail. They thought nobody could handle seeing an hour long cartoon. Yet against all the naysayers, Snow White and the Seven Dwarfs became one of the greatest animated movies ever made…

Snow White and the Seven Dwarfs is something I’ve seen many times on VHS when I was a child. Despite being as old as 1937 and a princess movie, everyone no matter their age or gender should see Snow White. The story is simple and easy for viewers young and old to follow. We begin with the ever important opening of the book. Once upon a time there lived a beautiful maiden with lips red as the rose, hair black as ebony, and skin white as snow. Snow White is the very first Disney Princess. Her most iconic outfit consists of a yellow dress, blue top, and red ribbon. Her hair is done in a classic 1930’s updo. She’s a kind gentle soul, but very naive.

Snow White is forced to work as a scullery maid for her wicked stepmother the Evil Queen. One of the most evil animated Disney villains ever created. While conversing with her Magic Mirror (not mirror mirror), she learns that Snow White is the fairest one of all. So of course the Queen attempts to have her killed. By having the Huntsman bring her Snow’s heart. She flees only to discover a quaint little cottage surrounded by dozens of friendly animals. The cottage belongs to the Seven Dwarfs. In order to help them stand out, Disney gave them each descriptive names and personalities. There’s the leader Doc, Bashful, Happy, Grumpy, Sneezy, Sleepy, and Dopey. They’re miners that serve as comic relief, but end up stealing the show. The two big standouts are Grumpy who doesn’t want anything to do with Snow and Dopey who doesn’t speak or have a beard.

Snow lives happily with the Dwarfs until the Queen hatches a new plan. She brews a magic potion that disguises her as a hideous hag. She famously brings Snow an apple and a single bite puts her under a sleep-like death. Only to be awakened by true love’s kiss. The Dwarfs chase the Witch to a cliff where a bolt of lightning sends her tumbling down. Ironic that despite her vanity, she ended up dying as ugly as she was on the inside. Although only appearing in one other scene and having no name, the Prince kisses Snow White and they lived happily ever after. Snow White and the Seven Dwarfs is actually very light on plot.

Most of the screen time is devoted to cleaning, dancing, and Dwarf hijinks. It’s understandable considering the animation was groundbreaking at the time. In full cell animated technicolor, Walt Disney invented a new way to film using multi-layered images. Apart from the Dwarfs and hag, the art style is made to look as realistic as possible. Of course Disney wouldn’t be where they are today without music. The most memorable tunes include the era appropriate love song “Some Day My Prince Will Come,” joyful cleaning song “Whistle While You Work,” and always catchy signature song “Heigh-Ho.” While only nominated for Best Scoring, Snow White did receive a special Honorary Oscar and seven little Oscars. Rightfully so, since Snow White and the Seven Dwarfs brought the magic of Disney to extraordinary life. 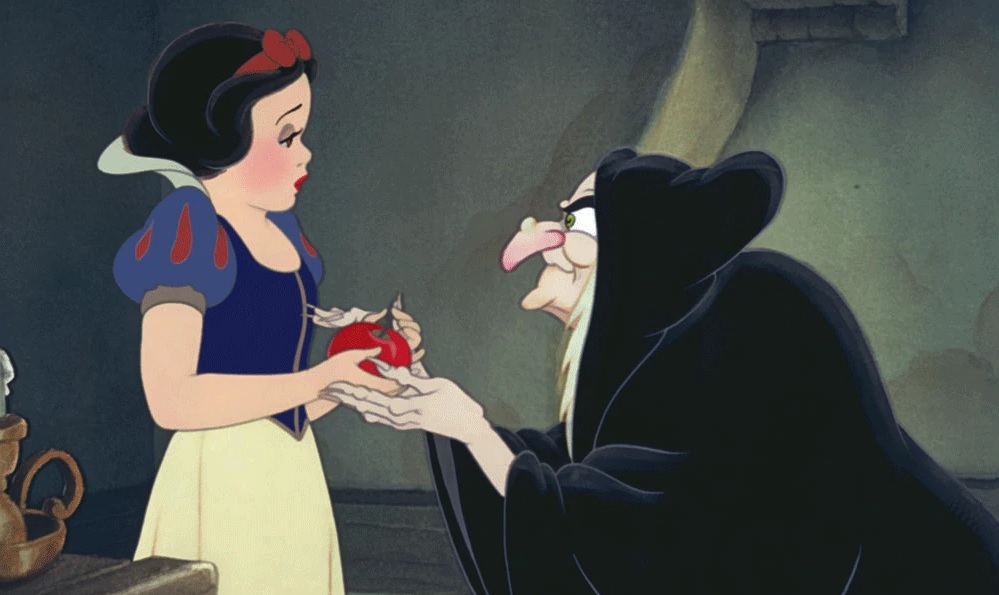 Snow White is given an apple