Superman Returns is aptly named. For this was truly a return for the Man of Steel on the big screen. The awful Superman IV: The Quest for Peace was enough to end the original franchise on a bad note. Leaving TV series Lois & Clark as the only live-action Superman in the 90’s. While Smallville kept Superman relevant in the early 2000’s. Yet a new Superman movie was always in the works. In fact, there were a record 5 different Superman movies we could have ended up with.

There was the more direct sequel Superman V. The bizarre sounding Superman Reborn. The infamous Tim Burton directed, Kevin Smith written, Nicolas Cage starring Superman Lives. An early 2000’s Batman vs. Superman. And finally a much more straightforward reboot titled Superman: Flyby. Each project morphed into the next, until we finally ended up with Superman Returns. The most unoriginal project of the bunch, but I finally realize that was the intention. DC had already successfully rebooted Batman the year before, so it was Superman’s turn. Even if it meant director Bryan Singer leaving his already successful superhero franchise in the dust (more on that later)…

Superman Returns nevertheless managed to spark excitement in me. I was 10 at the time and luckily I already saw the only Superman movies that count. The teaser had me the second I heard the iconic John Williams theme. At my age, I was hopelessly confused by this. My child brain thought that made Superman Returns a direct sequel to Superman: The Movie and Superman II. Then again, I think a lot of people were confused. Superman Returns is actually meant to be an homage to the original films. A tribute to Richard Donner and the late Christopher Reeve. Which is all well and good, but it’s just not what we wanted. Not that I didn’t enjoy Superman Returns when I first saw it.

As is tradition, another unknown actor was cast as Clark Kent/Superman. Brandon Routh fit the look of Christopher Reeve and wore the costume well. The costume is mostly the same, only with darker colors and a smaller symbol. Unfortunately, he’s not really given a lot to work with. Which is a shame considering how big Routh’s personality is (especially as another DC superhero on TV). Routh’s Superman is a bit more quiet, while his Clark Kent is more geeky than comical. Which is probably why Superman Returns dedicates a lot less time to Superman than you might think. This is the thinking man’s Superman movie. With the question of whether or not the world needs a savior like Superman.

It picks up after Superman has been gone for over 5 years. Just to make sure Krypton was actually destroyed. Followed by Kal-El crash landing in Smallville where he’s reunited with Ma Kent. Then Clark is brought back to Metropolis where his old job at the Daily Planet is waiting for him. Sam Huntington is a fine Jimmy Olsen and Frank Langella is an okay Perry White. Really the only unusual choice was Kate Bosworth as Lois Lane. Especially if she’s meant to be the same as Margot Kidder. Although she has great chemistry with Routh, she was just too young to convincingly play the fearless reporter. Not to mention the fact that she’s also a mother. With a son that may or may not be Superman’s. Yet another original character was created in the form of Richard White. Perry White’s nephew and Lois’ fiancé who was approximately the third romantic other guy that James Marsden played.

On the villainous side, we have Lex Luthor for the 4th time. I know he’s Superman’s greatest enemy, but there are so many other villains to choose from. Regardless, Kevin Spacey is actually one of the better Lex Luthor’s. Along with actually being bald, he manages to be ruthless while at the same time tapping into Gene Hackman’s enthusiasm. Best shown when he screams “Wrong!” But Luthor is once again after real estate. His new diabolical plan is to create his own island using crystals from the Fortress of Solitude mixed with Kryptonite. Parker Posey acts as a replacement for Miss Tessmacher.

Actually most of Superman Returns plays out in a similar way to the original movies. With plenty of reused dialogue that’s fine for nostalgia, but feels a bit hollow the second time around. Except for Jor-El, who’s literally a CGI recreation of Marlon Brando. Seeing the movie years later, I finally realized Superman Returns feels more like a disaster movie than a superhero movie. Superman doesn’t throw a punch in the entire nearly 3 hour movie. Instead Superman rescues a plane in an epic (scientifically accurate) sequence. As well as saves a lot of people, takes a bullet in the eye, recreates the iconic Action comics #1 cover, stops multiple disasters in Metropolis, and lifts a boat out of the ocean.

Ending in a climax that’s both devastating and ridiculous. Devastating because they finally utilize the “Death of Superman” storyline. Ridiculous because Superman actually lifts a gigantic island made out of very toxic Kryptonite into space. Something that would never happen in the comics. If you just want to see Superman fight an enemy of equal or greater power, then this isn’t the movie for you. However, if you’re fine with a love letter to the old fashioned days of the Man of Tomorrow, then Superman Returns just might be worth a second chance. 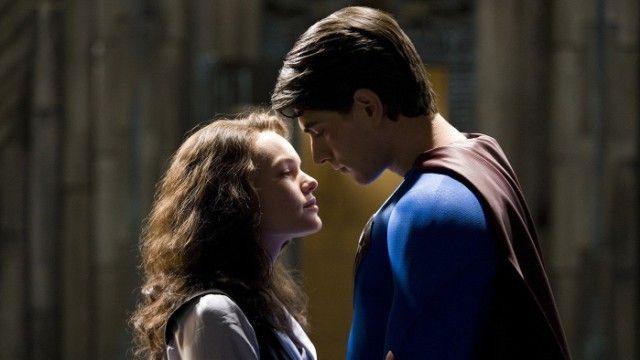