Melody Time is the last of Disney’s packaged anthology films. Since the next Disney film more closely resembles Fun and Fancy Free. As Walt Disney’s tenth animated feature, Melody Time is yet another attempt at Fantasia on a smaller scale. Like Make Mine Music, the only connecting factor is popular lyrical music. Only with a far more reasonable 7 animated stories. One of which features the last movie appearance of Donald Duck for over 40 years.

Once Upon a Wintertime – The first segment is a romance set in a winter wonderland. It follows a young couple named Jenny and Joe. They ride in a horse drawn carriage to go ice skating. Although it ends in disaster, nothing could keep apart this loving couple. At the same time, an adorable rabbit couple has a date of their own. The simple animation perfectly captures the snowy setting.

Bumble Boogie – The second segment is based on an unused idea from Fantasia. One that uses the well-known Nikolai Rimsky Korsakov tune “Flight of the Bumblebee.” The surreal visuals are of a purple bumblebee trying to avoid creatures made out of music.

The Legend of Johnny Appleseed – The third segment is the official Disney version of the classic tale of Johnny Appleseed. A pioneer with a cooking pot on his head who planted apple seeds all across the Midwest. This is the second longest segment, so it’s meant to be one of the central stories in Melody Time. I was definitely familiar with Johnny Appleseed, but there were things I wasn’t aware of. Like I didn’t know how strong his faith was. Not only did he plant apple trees, he spread the gospel as well. It’s actually refreshing to see a Disney movie with such a strong Christian theme. Since apples are such a universal food, Johnny’s mission is a success. The songs only help to enhance the fruitful message.

Little Toot – The fourth segment is a cartoony retelling of a children’s book with the same name. It’s about an anthropomorphic tugboat named Little Toot who just wants to have fun. Until his troublesome ways get him sent away. Only for him to discover a way to prove himself to his father. It’s a cute, if a little dated story with nice musical storytelling.

Trees – The fifth segment is a poem about a tree. It may seem simple, but it’s actually quite beautiful. The song and revolutionary art style give great importance to something we take for granted.

Blame it on the Samba – The sixth segment is basically a continuation of Saludos Amigos and The Three Caballeros. Since it features Donald Duck and José Carioca (in non-speaking roles) dancing along to the Samba. Along with the Aracuan Bird. It’s just as bizarre as before with more trippy visuals and Ethel Smith as yet another live-action singer.

Pecos Bill – The seventh and final segment is also the longest. At a whopping 22 minutes, it’s the most memorable of all the stories. Pecos Bill is one of the three major tall tale characters. Although raised by coyotes, Pecos Bill went on to become the greatest cowboy who ever lived. With his trusty steed Widowmaker, rattlesnake lasso, and pistols by his side, Pecos Bill did many wonders. Including roping a tornado while lighting a cigarette. Something you couldn’t even see for a long time due to smoking censorship. The folk song continues to tell of the cowboys love life with cowgirl Slue Foot Sue. The circumstances she gets into are unusual and they really make you hate his horse. The larger than life hero’s story is told by live-action pioneers around a campfire. It’s one of the reasons this story is the lengthiest.

In conclusion, Melody Time is another smooth musical package film that I saw at least once as a child. All I really remember was the “Pecos Bill” segment. Since it was such a sad way to end the movie. Unlike the other package films though, the two longest segments are at least considered tall tales. So it feels a bit less random than before. Really there’s something for everyone in the song filled movie. So I’d consider Melody Time to be one of Disney’s more well thought out collection of thematic stories. 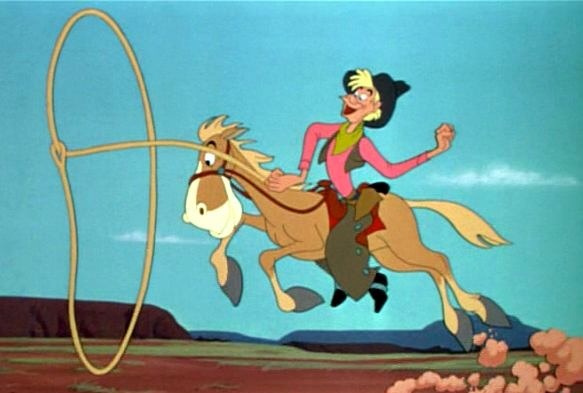