The Dark Knight is my all time favorite DC comics superhero movie. It’s also one of the greatest superhero movies ever made (or the absolute best depending on who you ask). It was a no brainer placing it number six on my “Top 10 Favorite Movies” list. I decided to limit myself to one film per comic book universe. Otherwise my list would be nothing but superhero movies. The darkness of the film is made all the more apparent with a title that for the first time drops Batman’s name in favor of his imposing nickname.

Expectations for The Dark Knight were extremely high at the time. Even the trailer that utilized the new Batman theme promised an exhilarating adventure. I remember the experience I had with my family very clearly. At 13 years old, I left the theater practically speechless. Unable to fully process the darker more complex nature of the sequel. It didn’t take me long to realize it was the Dark Knight’s finest outing to date. Sadly a lot of the added attention was attributed to the tragic and very sudden loss of Heath Ledger. Who portrayed the Joker in a way that stole the whole movie and earned the late actor an extremely rare posthumous Oscar… 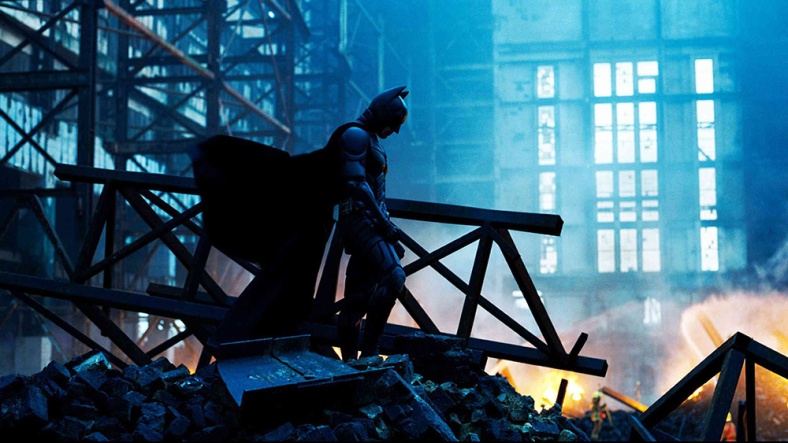 The Dark Knight picks up some time after Batman established himself as Gotham’s masked protector. The newly dubbed Lieutenant James Gordon now contacts Batman using the Bat-Signal. To which he often performs his trademark vanishing act. Together Batman, Jim Gordon, and newly elected District Attorney Harvey Dent attempt to clean up organized crime in Gotham. Dent’s complex origin inspired by the storyline The Long Halloween, is finally done justice. Blowing the excessively campy Tommy Lee Jones Two-Face out of the water.

Carmine Falcone is replaced by equally realistic comic book crime boss Sal Maroni. Only he and the rest of the mob are too afraid to operate at night due to the success Batman has had fighting crime. He even manages to apprehend Cillian Murphy’s Scarecrow. Although there is the unexpected detail of copybat vigilantes attempting to fight crime in his place. Something I’m positive people would be crazy enough to do. This little encounter allows the Dark Knight to finally address a concern that’s been present since the Michael Keaton days. Lack of neck movement. Something Bruce Wayne overcomes with the help of Lucius Fox. Who supplies him with a more tactical Batsuit. Meanwhile Bruce and Alfred are forced to move operations to a shiny new Batcave bunker while Wayne Manor is being rebuilt.

Bruce also deals with the personal struggle of still being in love with Rachel Dawes. Despite her love for fellow lawyer Harvey Dent. But the true struggle is with Batman’s greatest enemy. The Joker is a threat Batman will always face no matter the iteration. In keeping with Nolan’s realistic approach, this Joker is an agent of chaos with echos of a domestic terrorist. He has fun testing the people of Gotham with sadistic acts that push Batman to his limits. Leaving him questioning whether or not he should break his one rule. Now that you know the story, this is why it’s my all time favorite DC superhero movie… 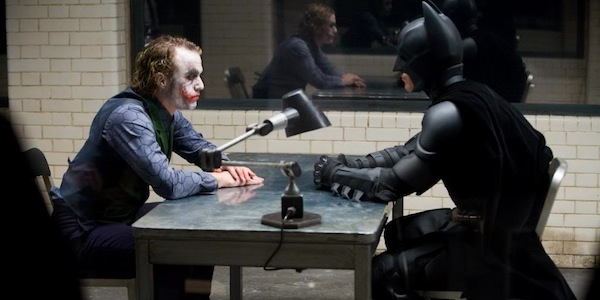 The Dark Knight is more than just a superhero movie. It can just as easily be labeled a neo-noir crime film. Since Batman is given greater use of his World’s Greatest Detective skills. Christopher Nolan was able to craft a comic book movie the Academy could take seriously. While at the same time pleasing dedicated fans like myself. For me this is the definitive cinematic take on the DC hero. Christian Bale became only the second actor to return as Batman. He brings the same level of dedication that he brought before, but his excessively gravely Bat-Voice is very hit or miss. Really it’s one of the only things The Dark Knight is ever ridiculed for. Leading to many hilarious parodies of it.

Another minor flaw was the recasting of Maggie Gyllenhaal as Rachel. She’s a vast improvement in terms of acting, but she’s no Katie Holmes in terms of looks. Gary Oldman is given an even greater role as Jim Gordon. With an arc that finally grants him the rank of Commissioner Gordon. Morgan Freeman is also given greater importance in Batman’s fight. As is Michael Caine, who delivers a speech that perfectly summarizes the new take on the Clown Prince of Crime.

Heath Ledger is my (and my mom’s) favorite take on the Joker. Jack Nicholson was great as a comic accurate gag themed clown, but Ledger elevated him to something we’ve never seen before. A Joker without an origin who just does things. His appearance is grubbier with long messy green hair, self applied white makeup, dark eye shadow, a red glasgow smile, and a purple trench coat. Both the Joker’s unique voice and laugh were things Ledger had to perfect in self-imposed isolation. Which probably contributed to his death.

I was taken completely off guard when I first heard the news. All my dad said was that the Joker died. I thought he meant Nicholson, but it was the 28 year old actor with so much potential. His flawlessly immersive performance won him an Academy Award for Best Supporting Actor. A groundbreaking win for a superhero movie. Can you believe his initial casting drew criticism? Well the late Heath Ledger has gone down in history as the Joker all subsequent actors aspire to.

He’s responsible for so many iconic moments. Like the broad daylight opening with clown masked goons offing each other one by one. His darkly comedic magic trick and improvised hospital explosion. As well as several retellings of how he got his scars. Scenes I actually performed in my high school Drama class. “Why so serious?” indeed. Of course Batman’s encounters with the Joker are just as awesome. In terms of action, that’s Batman using the Tumbler (Batmobile) in pursuit of the kidnapped Dent. It leads to the creation of the Batpod (Batcycle) in a scene that mirrors 1989 Batman. In terms of drama, it’s the interrogation scene reminiscent of The Killing Joke.

The tension of the encounter leads to the creation of Two-Face. After a shocking twist of fate, half of Harvey’s face is burned to reveal a face that made everyone in the theater gasp. With the flip of a coin, Two-Face decides the fate of anyone responsible. It’s unfortunate that Aaron Eckhart’s terrific performance was so overshadowed. Nevertheless, The Dark Knight ends with Batman using white eyed sonar to locate the Joker and put an end to his never ending joke on Gotham. But this is no happy ending. Batman takes the blame for Harvey’s crimes and becomes the titular Dark Knight. With what I would easily call Christopher Nolan’s magnum opus, The Dark Knight gave us the dark gritty Caped Crusader we deserved.

The Joker presents his card

Preceded by: Batman Begins & Followed by: The Dark Knight Rises