The Rescuers finally places Disney mice in the forefront. Based on a series of children’s books of the same name, the project is one of many unmade ideas that Walt Disney attempted to make. The problem this time was the political overtone of the original story. The Rescuers was shelved for 15 years before finally becoming their twenty-third animated feature. Although its inclusion in the Dark Age is more clear than before based on the gloomier settings, there is a noticeable divide. The Many Adventures of Winnie the Pooh was perfect as a collection of already great work, but The Rescuers is the best for its ambitious if overlooked sense of adventure. Just like most forgotten animated Disney movies, The Rescuers was something I enjoyed as a kid regardless of its lesser known status. Once again thanks to my brother.

The Rescuers follows a secret organization of mice called the Rescue Aid Society. They’re like the U.N. except their goal is to rescue children. The child is precious little orphan Penny who always carries a Teddy bear (that looks suspiciously like Pooh). She sends a message in a bottle asking for help. So the unlikely duo of classy Hungarian mouse Miss Bianca and well meaning jainter mouse Bernard answer the call. Such an elegant mouse was fitting for previous collaborator Eva Gabor and such a nervous mouse was fitting for Bob Newhart. Their tiny adventure takes them to the orphanage where a mustachioed bespectacled cat tells Penny’s story. The unique thing about their world is that Penny is able to talk to the animals. Which saves a lot of time. It turns out Penny was taken by greedy business associates using her size to find a priceless diamond called the Devil’s Eye. The hideous pawn shop owner Madame Medusa is a grandiose Disney villain. She has the right hand man in Mr. Snoops and two alligator henchman, but she’s really just a discount Cruella de Vil.

Bernard and Miss Bianca take the plane-like albatross Orville to a dark bayou where several animal towns folk offer their assistants. Including a dragonfly that acts as a motor for a leaf boat. It’s a sad situation, but Penny’s mouse rescuers help her find the diamond and bring things to an exciting close. Penny is adopted and it’s clear that the blossoming couple have many more adventures on the horizon. The Rescuers still has simple sketchy animation, but there is a lot more effort that gives it more atmosphere. However, the film does have the biggest inappropriate blunder of any Disney movie. When a sneaky animator snuck a topless woman in the flying scene. As for the music, it’s more like Bambi where its not a musical. The only song that sticks out is the “Rescue Aid Society” song. The Rescuers deserves more attention, as its potential is unmistakably Disney. 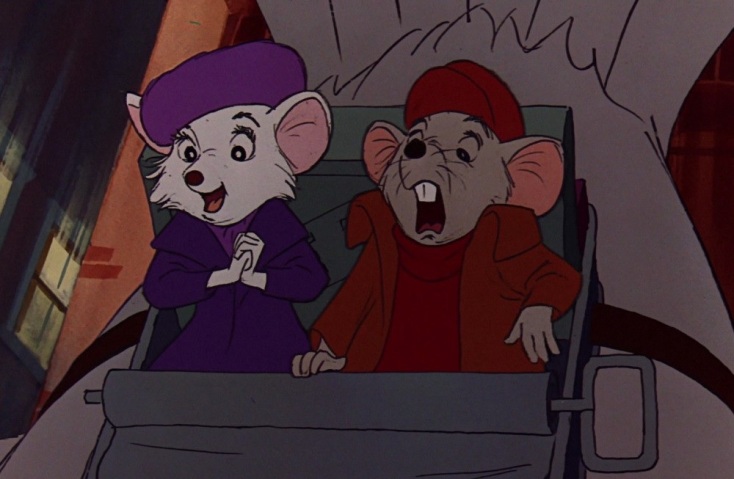 Followed by: The Rescuers Down Under