X-Men: First Class is the soft reboot us Marvel fans never knew we wanted. X-Men was key to the reawakening of the superhero genre, X2 proved the sequel could be just as groundbreaking, and X-Men: The Last Stand went too far and should have ended the Fox produced films. Well Fox continued to hold onto the rights, with the intention of just making solo spin-offs. When X-Men Origins: Wolverine failed, X-Men Origins: Magneto fell apart. But ideas from that film are what lead to the creation of X-Men: First Class. A 60’s period piece focusing on the friendship of both Charles Xavier and Erik Lehnsherr, how they became enemies, and how the X-Men looked in the early days. The movie is named after a similar comic, but since it’s technically a prequel, the team is obviously not the Uncanny X-Men.

I wasn’t sure how to feel about the idea when I first heard about it. I sort of looked forward to the spin-offs, but I agreed that an X-Men origin movie made more sense than one just focusing on Magneto. Especially if Ian McKellen was going to do the entire movie with an awful CGI face-lift. The first image was released and I was happy to finally see the use of classic yellow & blue costumes from the comics. Sure I remained skeptical, but X-Men: First Class was just the return to form I was hoping for. Despite normally directing more R rated comic book adaptations like Kick-Ass, Matthew Vaughn understood the X-Men better than most directors (although Bryan Singer was still involved as a producer)… 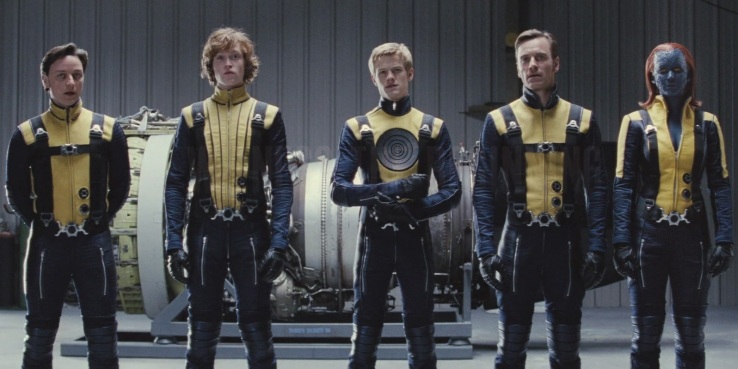 X-Men: First Class officially ditches the continuity established in the X-Men trilogy. While still attempting to connect the films. Professor X clearly stated when he met Magneto in the first film and meeting Jean is long past the 60’s in the third film. Character changes were also made in the prequel that aren’t present in any of the other films, but it all works out in the end. X-Men: First Class begins with the starkly different power manifestation of Erik Lehnsherr and Charles Xavier. Erik bending a metal gate in a concentration camp is lifted directly from the first X-Men. Shots are reused, but others are replaced by the new actors. What’s also different is the perspective of Nazi scientist Klaus Schmidt. A man who essentially creates Magneto by forcing him to move a coin and killing his mother. On the other side of the coin is a young Charles living in a lavish mansion in West Chester, New York. His telepathy has already manifested and he uses it to speak to someone disguised as his mother. It turns out to be a young Mystique who becomes his foster sister. Although having an indeterminate age is accurate, Mystique never had this connection to Xavier in the comics.

The rest of X-Men: First Class takes place in 1962. Where they make the clever decision to incorporate real world history into the plot. Patrick Stewart and Ian McKellen were so perfect as Professor X and Magneto that it seemed impossible to recapture that, but James McAvoy and Michael Fassbender were just as inspired choices. McAvoy is great at portraying a young Charles Xavier with a 60’s attitude who grows into a caring mentor. Xavier still being able to walk is accurate, but baldness should’ve been a side effect of his Mutation like in the comics. Fassbender develops Erik Lehnsherr into an even more tragic figure. His friendship with Charles is believable and so is his path towards becoming one of the greatest supervillains in Marvel history. Before becoming a Hollywood icon, Jennifer Lawrence made her blockbuster debut as a more innocent Raven Darkhölme. Who understandably hides her blue skin in an attempt to be normal.

While Charles is celebrating his graduation from Oxford, Erik is hunting Nazis in the hope of finding Schmidt. A Mutant who became Sebastian Shaw, leader of the Hellfire Club. When it comes to villainous teams that the X-Men have faced, I knew the least about the Hellfire Club. In the comics, they’re an elite social club bent on world domination. So it made sense for them to be the primary threat with plans of escalating the Cuban Missile Crisis. Since Mutants are the Children of the Atom. Kevin Bacon is a threatening, but less fancy version of Shaw that absorbs energy and uses a helmet that blocks out telepaths. January Jones is a sexy Emma Frost with a revealing white outfit ripped straight out of the comics. Her powerful use of telepathy and diamond skin are way better than whatever X-Men Origins: Wolverine was trying to do. Unfortunately Jones is monotone and sort of lifeless as Frost. Shaw and Frost are the only comic accurate Club members while the lesser known whirlwind creating Riptide and red demonic teleporter Azazel are not.

Rose Byrne plays the very necessary early love interest of Charles Xavier. In the comics, Moira MacTaggert is a Scottish doctor who helps Mutants. In the movie, she’s an American CIA agent. She and Charles come together in hopes of aiding Mutants with Government assistance. They prove Mutants exist when Raven morphs into William Stryker Sr. A man in black takes them to a secret facility that happens to have Dr. Hank McCoy. Nicholas Hoult is just as good a choice to play a younger Beast with big feet. His intelligence helped create the Blackbird (X-Jet), a morse code version of Cerebro, and there costumes. However, the Beast and Mystique romance is also not from the comics. Charles and Erik end up becoming friends when Charles rescues him from attempting to kill Shaw. Together they recruit potential Mutants in a fun montage. From lesser known Mutants like the winged Angel Salvatore and adaptable Darwin to longtime X-Men like Banshee and Havok.

Hugh Jackman even makes one of the most hilarious cameos of all time. When Wolverine tells Charles and Erik to “Go f*** yourself.” The appearance alone would be enough, but the unexpected F-bomb is even better. While Charles and Erik get answers from Frost, the recruits bond over their powers and pick out their superhero names, but it’s not long before Shaw attacks. Angel sides with him and Shaw kills Darwin. Leaving Beast, Mystique, Banshee, and Havok as the titular first class of X-Men. They relocated to Xavier’s mansion where he teaches them to better harness their power. A welcome addition that other X-Men films lack. We see an early version of the Danger Room, Banshee receiving his flight suit, Havok concentrating his energy rings, Beast unleashing the animal within, and Charles helping Erik move larger objects.

Meanwhile, Erik helps Raven accept herself. Which she does when Hank rejects her blue appearance. She tries to seduce Erik (she even becomes Rebecca Romijn), but he instead convinces her not to hide. Which is the somewhat convoluted reason why she’s naked. Although her blue scales & makeup aren’t as good as what came before. At the same time, Hank’s attempt to normalize his feet results in his iconic blue fur and more beastly appearance. Before battle, Charles and Erik discuss conflicting ideologies over their first of many chess matches. The team finally don yellow & blue costumes, but it’s just the characters wearing them that’s inaccurate. They take the Blackbird to the beach in Cuba where U.S. and Soviet ships are close to firing their missiles. Both teams contribute their own unique power. Erik lifts Shaw’s submarine out of the sea and the fight ends when Erik takes revenge by pushing the same Nazi coin through his head.

With his helmet blocking out Charles, Erik becomes the villain when he redirects the missiles. A fight between friends breaks out and Erik accidentally paralyzes Charles with Moria’s bullet. A tragic explanation to why Professor X is in a wheelchair, but I could do without the bald jokes. Erik then claims the Hellfire Club Mutants as his own and Mystique joins him too. Professor Charles Xavier decides to start a school/team of X-Men free from the government and he kisses Moria before erasing her memory. Meanwhile, the newly formed Brotherhood of Mutants recruits Frost and Erik finally becomes Magneto. Complete with comic accurate red & purple helmet. X-Men: First Class is easily the closest thing to a faithful X-Men adaptation by Fox. The look is a lot closer and the 60’s Cold War time period is the same as when the first comic was published. It’s a shame Stan Lee didn’t have a cameo. The only real problems are the constraints of the X-Men trilogy. It’s great seeing more Mutants come to life, but it would have been better seeing the original line up. The studio continues to write their own continuity, but it still ends up being the best movie since X2. X-Men: First Class is the excellent Bond era superhero Cold War thriller that kept Marvel from gaining the rights for years to come.

5 thoughts on “Mutant and Proud”