The Rescuers Down Under is the very first Walt Disney animation sequel. Despite the success of so many other Disney films, the studio had always stuck with happily ever after. The Rescuers was one of a few movies that made sense to have a sequel. As it seemed like the Rescue Aid Society could have many adventures. The Rescuers Down Under is the twenty-ninth animated Disney movie and the first released in the 90’s. It’s wildly underrated to the point people forget it’s part of the Disney Renaissance. Personally, I wish The Little Mermaid came out after, because The Rescuers Down Under feels so out of place compared to the more memorable musicals of its era. Not that I don’t have some fond memories of seeing the sequel when I was a kid.

The Rescuers Down Under takes all the action to the Australian outback. The new child in need of rescue is a boy with an American accent named Cody. He helps out his fellow animal mates including a fictitious giant golden eagle Marahuté. Unfortunately, Cody’s connection with the mother eagle gets him kidnapped by poacher Percival C. McLeach. An eccentric Disney villain that George C. Scott helps fit in with the rest of the villains in his era. I still wouldn’t consider him one of the all time greats though. He tears down the forest with his monstrous truck and pet Goanna Joanna by his side. Of course the location meant the use of several Australian animal sidekicks. There’s Kangaroos, Koalas, and a particularly annoying frill-necked lizard. It’s really Bernard and Miss Bianca that I want to see. Bob Newhart is just as nervous as ever with Bernard’s frequent attempts to ask Miss Bianca to marry him. It’s a satisfying arc that makes him the hero in the end. This was sadly the final film role for Eva Gabor, but her class will be remembered. They accept the mission and end up taking another Albatross. Since the voice actor behind Orville passed away, John Candy replaces him with the more comical Wilbur (a clever nod to the Wright brothers).

While there, they meet an adventurous kangaroo mouse named Jake who helps them find Cody. It’s a desperate situation, but Cody is rescued and the mighty mother eagle is safe. Giving Bernard the right moment to propose. Although it’s strange that this was the movie that did it, The Rescuers Down Under is the very first digital feature film. All the traditional animation and coloring was done on the computer using CAPS. Turning Australia into a sweeping landscape with magnificent flying sequences. The heavier emphasis on action & adventure means there are no original songs in the movie. That, along with being an average continuation to a forgotten movie is probably why it wasn’t a major success. But the groundbreaking animation and unexpected effort help make The Rescuers Down Under a worthy addition in its era. 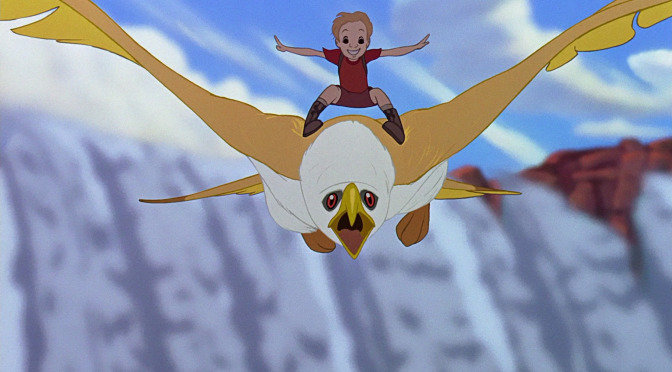 Cody flies on the back of a golden eagle

Preceded by: The Rescuers

3 thoughts on “The Great Golden Eagle”