Hercules finally gave Disney animation a story of mythical proportions. Greek mythology is full of great stories. So it made sense for the studio to want to adapt one of them. The first story pitch was for The Odyssey, but that’s way to long and complicated. Hercules was chosen instead due to its potential as a superhero type film. After the far more serious The Hunchback of Notre Dame, Hercules went back to the light hearted comedy of Disney Renaissance films like Aladdin. Specifically old fashioned screwball comedy. The thirty-fifth Walt Disney animation production also took chances with more pop culture references, stylized animation, and a gospel choir.

I was way too young to know Greek mythology, but everyone knows it’s the farthest thing from kid friendly. Zeus was a womanizing sleazeball who married his sister Hera and fathered Hercules with the mortal woman Alcmene. Hera was spiteful against Hercules and tired to have him killed multiple times. At the same time, Hercules was a bit of a blowhard. Although most people are unaware that the name Hercules is actually from Roman mythology. The less iconic Heracles is really the Greek name. Obviously several things needed to be Disneyfied. A paragon of masculinity like Hercules had been adapted numerous times starring many famous muscular actors. My parents have their favorite versions, but for me, the 1997 Hercules is the definitive take on the hero… 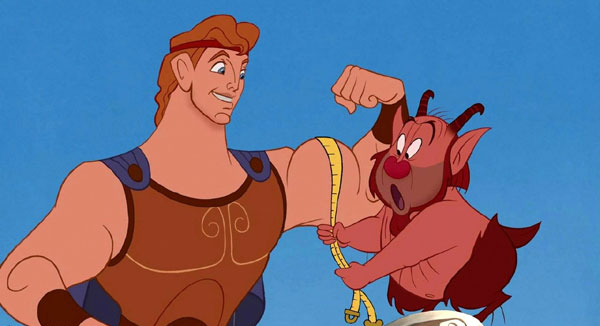 Hercules goes from zero to hero

Hercules is the very first Disney animated movie I saw in theaters. At the wee age of 2 years old. I was way too young to remember the experience, but it helped make Hercules a personal favorite of mine. My brother and I watched our VHS copy so many times growing up. The male centric battle of the gods was seriously cool and tons of fun. Hercules just gets better the more you know about Greek mythology. With so many references to Greek figures that went over my head as a kid. But the almost parody-like modern 90’s jokes in Ancient Greece work surprisingly well. Hercules is very much the Disney equivalent of Superman. Many of his famous trademarks can be seen in their portrayal of the demigod.

Hercules opens like a traditional Greek tragedy with appropriate Charlton Heston narration, but the tone is better set by the Gospel choir of Muses. They tell a far more upbeat retelling of how Zeus, king of the gods, hurled his mighty thunderbolts at the Titans of the past. Locking them in a prison that could only be opened when the planets aligned. Hercules is an adorably buff baby god born on Mount Olympus. Which is depicted as a heavenly paradise in the clouds. Zeus and Hera are a loving couple who care deeply for their newborn son. The rest of the gods are colorful and easy to identify if you know your mythology. Rip Torn is a softer, far more fatherly Zeus who gifts his son with a baby Pegasus.

Hades, lord of the dead, makes sense as the main Disney villain. The ruler of the Underworld is like the devil mixed with a used car salesman. James Woods was pitch perfect casting as the scene stealing Hades. His fast talking ad libs are just as hilarious as his explosive outbursts. Hades sharpe design and flame hair was a genius idea. Bobcat Goldthwait & Matt Frewer are just as fun as his dimwitted demon henchmen Pain & Panic. Hades’ evil plan for world domination comes when the all seeing eye of the Fates foretell the reemergence of the Titans. The only catch is Hercules. Like Krypton, baby Herc is separated from his home among the gods. Pain & Panic remove his godhood with a potion that fails to fully depower him. Like Ma & Pa Kent, Herc is found by a loving farm couple who raise him as their own. Except his godly strength is impossible to hide. It starts with a recreation of the baby strangling snakes.

Like Smallville, a teenage Herc tries to fit in with his small Greek community, but his powers label him a freak. So his parents tell him the truth about his Olympian parenthood. Like the Fortress of Solitude, Herc visits the Temple of Zeus. There his father reveals the truth and explains that proving himself a hero will restore his godhood. Pegasus returns as his funny bird brained horse sidekick. They travel to see trainer of heroes Philoctetes. Phil is a nymph crazy, sarcastic, hot headed satyr that only Danny DeVito could do justice. Just never google what a satyr is. Phil is a weary trainer who’s trained everyone from Jason to Achilles. Although reluctant at first, Phil trains Hercules until he bulks up to the hero that we all know and love.

Like Superman, Hercules has just as much heart as brawn. Tate Donovan helped make Hercules a likable shy farm boy with all the strength of a god. His superhero-like cape and Greek armor helps as well. An encounter with the Centaur Nessus gives him an opportunity to rescue a damsel. Like Lois Lane, Megara is unlike any other Disney heroine. Meg has a cynical sense of humor, sassy quips, and a ton of relatability. She’s criminally underrated. Although her design might be too much for some, I can still find the beauty in her enchanting looks and ponytail. Meg is also different because she’s stuck working with Hades due to a deal she made to save someone she loved. Like Lois & Clark, Meg & Wonder Boy’s opposites attract relationship is sweet and complicated. Like Metropolis, the big city of Thebes is in desperate need of a hero.

That call is answered in an epic battle against the Hydra orchestrated by an enraged Hades. An awesome montage pays homage to the 12 labors of Hercules as he beats every beast Hades sends his way (the Nemean lion looks suspiciously like Scar from The Lion King). At the same time Herc becomes a celebrity with his own fan club and merchandise. Which isn’t enough to be a true hero. Unfortunately, Hades uses Meg as Hercules’ weakness in order to remove his powers. Giving him the time to unleash the Titans on Mount Olympus. Without Phil or Pegasus at his side, Herc is nearly killed by the bumbling Cyclops. Meg unites them, but it’s at the tragic expense of her life. Which restores Herc’s power long enough to defeat the Titans of lava, ice, stone, and tornados. Then riding Cerberus into the Underworld in order to face Hades. Herc’s last heroic effort is rescuing Meg from the river Styx.

I’m in awe every time Hercules proves himself a true hero and it’s always satisfying to see Herc punch Hades into the river of souls. I have mixed feelings about the decision, but it’s heartwarming to see Hercules give up his godhood for the woman he loves. I tear up the moment the gods fulfill Phil’s dream to finally have one of his heroes appear in the stars. Hercules is one of the funniest Disney comedies, but it does have many sincere moments like that. You can’t help but feel the power of Hercules in all his epic fights. The animation helps to increase the god-like strength of the action. The biggest computer animated sequence is between Herc and the Hydra. The Hydra is an intimidating CGI creation that only gets bigger when its heads multiple with every head slice. The very stylized rounded Greek character looks are different, but I never found them distracting.

The songs are some of my personal favorites in any Disney musical. It made perfect sense for the story of a god to have an all black Gospel choir. The much needed soul is full of infectious energy. First seen in the spirited introduction “The Gospel Truth.” Then at the end with the triumphant “A Star is Born.” The Oscar nominated “Go the Distance” is a unique and inspiring male longing song by Hercules. While Susan Egan reinvents the Disney love song with Meg’s in character “I Won’t Say I’m in Love.” Phil’s comedic “One Last Hope” is an action packed training montage, but my favorite montage will always be “Zero to Hero.” Bless my soul, I get pumped the second I hear the insanely catchy rising fame song. Hercules is Disney’s mightiest hero’s journey. 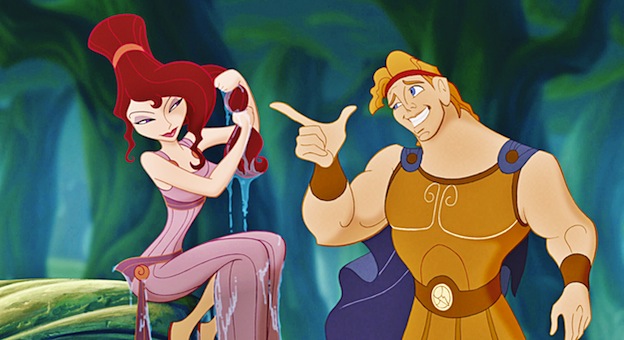