Monsters, Inc. is so good it’s scary. Becoming the first Disney & Pixar animated film to be nominated for Best Animated Feature. Since 2001 was the first year the Academy Awards created the much needed category. Which it sadly lost to the competition, but that doesn’t make it any less of an achievement for computer animation. Monsters, Inc. asks the question, what happens to a monster when it returns to a child’s closet? After exploring toys and bugs, monsters were something entirely new. Since monsters don’t exist (or so we think), the animation studio had to get creative. Considering John Lasseter was busy with Toy Story 2, Monsters, Inc. became animator Pete Docter’s directorial debut.

The monster theme stayed the same, but the story changed many times. Until it was decided that it would focus on a monster company called Monsters, Inc. A human child was added as well, but the buddy monster dynamic wasn’t included until later on. My 6 year old memory of seeing Monsters, Inc. in theaters is clearer than the previous Pixar movies. Mostly because I remember being an emotional wreck afterwards. Although I’d call it a comedy above anything else, Monster, Inc. is the first Pixar film to be driven by emotion. It may not have won the top prize, but Randy Newman finally got his first Oscar for Best Original Song… 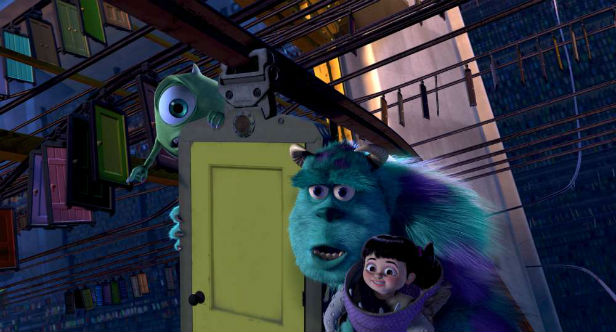 Mike and Sully escape with Boo

Monsters, Inc. is preceded by the Oscar winning original Pixar short For the Birds. A quick humorous short where bird’s lament a large bird joining them on a powerline. Monsters, Inc. had the difficult task of not only creating monsters from scratch, but giving them emotions as well. The monster world of Monstropolis was also original, but it’s not too dissimilar from our own world. Save for a few monstrous tweaks. Monster names are so ordinary that it’s kinda hilarious. Monstropolis is a city run by screams. As the screams of children are used to power canisters that create a clean energy source. The corporate angle is just another example of Pixar’s grown up writing. Although Monsters, Inc. is a buddy comedy, James P. Sullivan (affectionately nicknamed Sulley) is the main focus. Sulley is a large bear-like monster with horns, blue fur, and purple spots.

The computer animation in Monsters, Inc. advanced to the point of rendering realistic fur and clothing. It was early, but the effects still hold up today. Sulley’s co-worker, roommate, and best friend since grade school is Mike Wazowski. A green one-eyed monster ball. The respectable cast fits their respective monsters perfectly. John Goodman is just like the gentle giant Sulley. A role that was consistently compared to a seasoned football player. After foolishly turning down the part of Buzz Lightyear, Billy Crystal proved to be the perfect fit for the neurotic Mike. Mike & Sulley are another great unlikely buddy duo. Filled with great chemistry and Crystal’s usual comedic stylings. Most gags are based around the many unique monsters found in the city.

They both work at Monsters, Inc. Which is experiencing an energy crisis thanks to children being harder to scare thanks to short attention spans. One of James Coburn’s last roles was as CEO Henry J. Waternoose III. A five-eyed monster with crab legs who will do anything for the future of his company. Sulley is the golden monster who works as the top scarer at Monsters, Inc. Mike is his coach who assists him on the job. Scaring is achieved through an interesting system of doors that lead to the human world. I can’t say I ever genuinely thought there were monsters in my closet, but it is a fun concept to tackle. Doors are placed on a scare floor and the tough monsters compete to scare the most children. Randall Boggs is a particularly slimy Pixar villain who taunts Mike and is jealous of Sulley’s scare record. Randall is a bug-eyed lizard monster with creepy camouflage that only Steve Buscemi could voice.

Since children are believed to be toxic, a 2319 is called when a sock is discovered. Leading to the funniest running gag where the hazmat suited CDA keeps tackling monsters, specifically the unfortunate George. Apart from dealing with his raspy slug administrator Roz, Mike is happily dating his girlfriend Celia. Another one-eyed monster with Medusa hair and the sultry voice of Jennifer Tilly. They have reservations at Harryhausen’s (great reference), but Sulley has to file Mike’s paperwork after hours. Where he discovers a vacant white door with flowers on it. The first human with significant screen time in a Pixar movie is Boo! An adorable 2-3 year old who isn’t afraid of Sulley. It’s really the increasingly shifty Randall who she fears. Boo mostly communicates with baby talk which makes sense for the bonding between her and Sulley.

He’s at first afraid like every other monster, but he grows to realize scaring children may not be his purpose after all. Boo makes a scene at the restaurant, putting all of Monstropolis on high alert. Mike & Sulley frantically try hiding Boo, but realize a disguise is the best option. Except Monsters, Inc. is crawling with CDA. Mike fails to get Boo’s door and she runs off. After a hilarious misunderstanding, Randall makes a deal that gets Mike kidnapped. Revealing his sick plan to kidnap children and harvest their screams. Sulley swaps out Mike for Randall’s assistant Fungus and the three flee to tell Waternoose. Only it leads to the heartbreaking moment where Sulley scares Boo. What shatters his perception even more is Waternoose turning out to be another villain in Randall’s scheme.

Mike & Sulley are banished to the Himalayas where it turns out monsters like Bigfoot, the Lochness Monster, and the Abominable Snowman ended up. John Ratzenberger voices the latter as a kind hearted lover of snow cones. A rift forms in their friendship and Sulley sets out to return on his own. Of course Mike followed him there since nothing is more important than their friendship. The thrilling climax takes Mike, Sulley, and Boo to an entirely original room where they keep all the doors. The sequence plays out like a high energy roller coaster where they ride the doors with Randall in hot pursuit. When reaching Boo’s door fails they begin door hopping. Randall eventually catches up, but nothing beats Boo finally standing up to him.

Randall’s defeat takes him to the same trailer from A Bug’s Life next to the Pizza Planet truck. Where hillbillies beat him with a shovel. With the door out of power, Sulley instead exposes Waternoose’s corrupt plan on tape to the CDA. Which turns out to be lead by Roz. She orders the door to be shredded and Sulley’s tear worthy goodbye gets me everytime. Although Boo’s room does feature many Pixar easter eggs. From a luxo ball and Jessie doll to a certain lost fish. Waternoose is arrested, but the company bounces back when Sulley realizes Boo’s laughter was ten times more powerful than screams. Giving Mike plenty of opportunity for standup.

His final gesture of friendship is rebuilding Boo’s door and reuniting the two before the credits roll. A beautiful moment that always makes me cry. Followed by the last great mock blooper reel. There’s Roz making surprise appearances, Rex making a cameo, and even an entire musical production based on Mike’s “Put that Thing Back Where it Came From” lie. The material was so good that it lead to the first Pixar spin-off short. Mike’s New Car is a funny short centered on Mike’s prized monster of a car. The Oscar winning “If I Didn’t Have You” may just be a discount “You’ve Got a Friend in Me,” but the jazzy ballad shows the true meaning of friendship. Monsters, Inc. is enough to end a child’s fear of monsters. 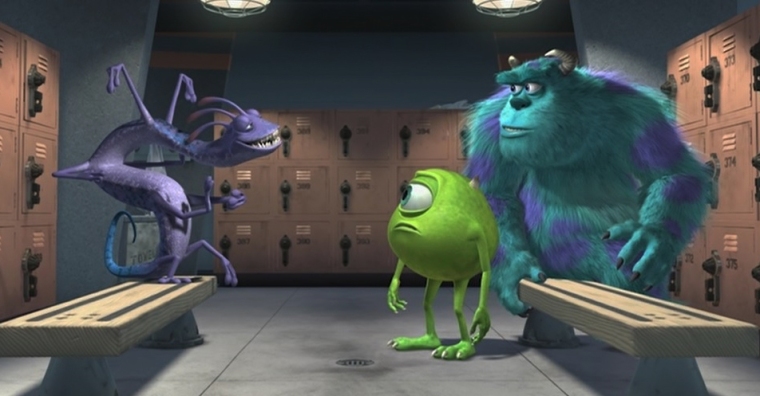