Finding Nemo swam into all of our hearts. Becoming the first (but far from the last) Disney & Pixar animated film to win Best Animated Feature at the Academy Awards. Understandable, since I’d go so far as to call Finding Nemo the best Pixar movie without Toy Story in its title. After giving monsters a heart with Monsters, Inc., the next non-human creatures to receive human emotions were fish. Finding Nemo asks the question, what if fish searched the entire ocean to find one little fish? The fish themed adventure became the directorial debut of Andrew Stanton. Another Pixar animator who was due for his own project.

All ideas for Finding Nemo came from Stanton’s own personal experiences. There was a fish tank in his childhood dentist office, visiting an aquarium was eye catching for computer animation, and being overprotective to his own son supplied the heart. Finally, it was the image of two clownfish in an anemone on National Geographic that sealed the deal. Despite the lack of fish in the title, Nemo is at least a reference to the famous nautical Captain Nemo. I was 7 going on 8 when Finding Nemo came out in 2003. My dad appropriately took my brother and I to see the movie in a packed theater. Finding Nemo was an emotional journey that parents and their children could relate to…

Marlin and Dory hold on tight

Finding Nemo was paired up with the 1989 Pixar short Knick Knack. A wacky comedy of errors where a snowglobe snowman desperately tries to get to a girl. Finding Nemo has some of the most gorgeous computer animation you’ll ever see in an early 2000’s film. Fish and the ocean had been done before in animation, but never to this scale. Pixar really went the extra mile this time. Animators became scuba divers in order to study the coral reef closely. Then they took classes in fish biology, oceanography, marine life, and anything else that would make Finding Nemo as scientifically accurate as possible. Which is why the movie is filled aquatic facts. Along with the terrific tagline “There are 3.7 trillion fish in the ocean. They’re looking for one.” Finding Nemo has an enormous respectable cast of real life sea creatures. Although minor inaccuracies pop up here and there.

Finding Nemo became the first Pixar movie to make you cry right at the beginning. Making it clear that Pixar knows how to draw emotion from the most unlikely places. Marlin and his wife Coral are orange & white striped clownfish. They have over 400 eggs, but Coral and the eggs disappear in an instant after a devastating barracuda attack. There wasn’t a dry eye in the house when Marlin holds onto the remaining egg. Naming him Nemo to honor his wife’s wish. Fortunately things get more upbeat when Nemo grows up. Albert Brooks was the perfect fit for Marlin. A normally hilarious comedian voicing a clownfish who isn’t funny. Marlin is one of cinemas greatest fathers, but he starts out very overprotective.

Nemo is his eager son ready to explore the ocean. Another reason for his overprotection is Nemo’s smaller lucky fin. They live in an anemone like real clownfish, but they have to leave for Nemo’s first day of school. The underwater animation has aged beautifully. Managing to capture the swimming, translucent lighting, and even the bacteria in the ecosystem. There’s a character for just about every sea creature. Marlin & Nemo first meet butterfly fish Tad, flapjack octopus Pearl, seahorse Sheldon, and their fathers. Mr. Ray the spotted eagle ray is their spirited musical teacher who increases Marlin’s paranoia when he takes them near open water. Nemo and his new friends try to get him near a butt (boat), but Marlin makes things worse by sheltering him too much. When Nemo acts out by touching the boat, he’s taken by scuba divers.

Starting the adventure of Marlin literally finding Nemo anywhere he can in the massive ocean. Joining him on his endeavor is Dory. A royal blue tang with short-term memory loss. Right before putting all her energy into her talk show, Ellen Degeneres was a surprisingly inspired choice to play the forgetful Dory. Giving her a fun optimism that makes her the best comedic foil for the cynical Marlin. Making Marlin & Dory the first male/female unlikely Pixar duo. The first obstacle they encounter is a great white shark with the clever name Bruce. Although he seems like a threat at first, Bruce is actually a shark trying to give up eating fish. Since “Fish are friends, not food.” Marlin & Dory attend their meeting along with hammerhead shark and mako shark Anchor & Chum. Both of whom have Australian accents since Finding Nemo technically takes place in Australia. When Marlin finds the diver’s mask, it nicks Dory, and the resulting blood drives Bruce crazy.

Although it retains the G rating of previous Pixar films, this is the first time I thought a PG was warranted. Bruce’s attack both reveals Dory’s ability to read and sets off a field of mines. After a lesson in how to “Just keep swimming,” Marlin & Dory follow the mask in the dark depths of the sea. Encountering a deadly angler fish in the process, but giving Dory a chance to read “P. Sherman, 42 Wallaby Way, Sidney.” They discover the location by speaking to a school of fish of course voiced by John Ratzenberger. They assemble the way to get there, but warn against going over a trench. Marlin ignores the warning and they end up in a dangerous field of jellyfish. Dory begins to loosen Marlin up by bouncing on the jellyfish until their stingers get in the way. Marlin’s bravery gains the help of the sea turtles who take them on the East Australian Current. Crush is a totally righteous surfer type voiced by Stanton himself. His carefree attitude towards his son Squirt helps to open Marlin’s eyes even more.

Word of his journey gets around until it makes its way to Nemo himself. Nemo has his own personal journey stuck in a dentist’s aquarium tank. Full of colorful characters like the bubble obsessed yellow tang Bubbles, short-fused blowfish Bloat, germaphobe royal gramma Gurgle, delusional striped damselfish Deb (and her “sister” Flo), French cleaner shrimp Jacque, and clingy caring starfish Peach. I only recently discovered Allison Janney voiced the latter. Willem Dafoe acts as a mentor for Nemo as hardened moorish idol Gill. He helps Nemo become more independent and the tank gang initiates him into their tiki habitat. Gill hatches a crazy plan to get them out of the tank by using Nemo’s size to jam the cleaning mechanism, but the first attempt puts him in too much danger.

Until the real danger and only true villain enters the picture. The ocean is really more of an obstacle to overcome, while Darla is a genuine threat from a fish’s perspective. She’s the bracefaced niece of the dentist who doesn’t know how to take care of her fish. The animation on the humans is gradually getting more stylized. Geoffrey Rush voices the friendly pelican Nigel who manages to get Marlin’s story to Nemo. Meanwhile, Dory begins speaking to a whale. Marlin projects his fear for Nemo’s wellbeing onto Dory, but he lets his guard down long enough to trust her. The whale takes them to Sydney where Nigel comes to protect them from a flock of seagulls. The funniest joke is gulls being so dumb that they can only say “Mine.” Nigel takes them to the dentist, but another tear worthy moment comes when Nemo plays dead in order to go down the drain. Marlin is devastated and Dory sadly begins to forget without him. Gill manages to rescue Nemo by sending him down the drain.

They’re still separated, but Nemo runs into Dory. Who’s lost her memory again, but gets it back in time to force a crab to reveal Marlin’s location. The father/son reunion is just as satisfying as you’d hope it would be. Then everything they’ve learned comes together in the climax when a fishing net catches Dory. Marlin trusts his son, Nemo believes in himself, and all the fish take Dory’s advice to just keep swimming. In the end, Marlin & Nemo have grown into better fish and Dory becomes part of the reef. Followed by the tank gang not knowing what to do after escaping. As well as a scuba cameo from Mike. Randy Newman doesn’t score the movie. Instead “Beyond the Sea” is the signature song. Finding Nemo uses undersea fish to explore a genuine lesson on parenting. I embraced the movie so much that we even bought the tie-in video game. The fish theme became so popular that it inspired many animated copycats and far too many neglectful pet owners. Finding Nemo teaches us the lesson that life is best lived when we just keep swimming. 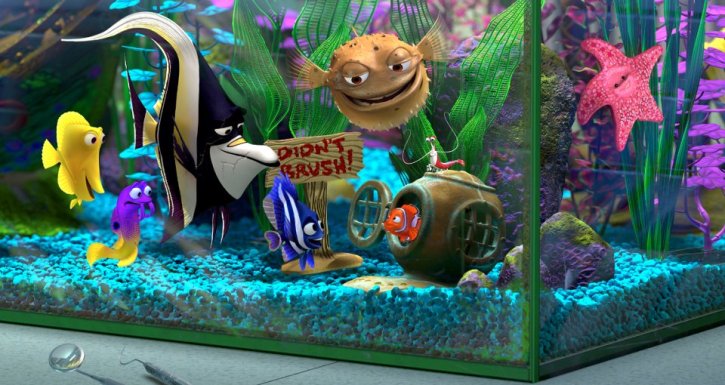 Nemo hangs with the tank gang