The Incredibles is the most incredible original superhero movie ever made. Winning the Academy Award for Best Animated Feature, Sound Editing, and being nominated for Original Screenplay and Sound Mixing. Becoming a major Box Office success for Disney before Marvel came along. The Incredibles is a top tier Pixar film that tested all the limits of computer animation. Something that Brad Bird, the criminally overlooked director of The Iron Giant, pushed above anything else. The Incredibles asks the question, how does a family of superheroes adjust to normal life? Making it the first Pixar movie to star humans. Since the studio always focused on either toys, bugs, monsters, or fish in the past.

The Incredibles was also the first Pixar movie with a PG rating. Since the film can get surprisingly adult even compared to more “grown up” superhero flicks. Since I’d been a fan of Marvel and DC at a very young age, The Incredibles was a big source of anticipation. Since it brought two of my favorite genres together (animation and superhero). It was Bird’s intention to pay homage to comic books and spy movies from the 60’s. While also drawing inspiration from his own family. It was a fun idea that grew into some of the best writing Pixar had ever seen. I was 9 years old when The Incredibles hit theaters and I caught every homage made to the greater superhero pantheon… 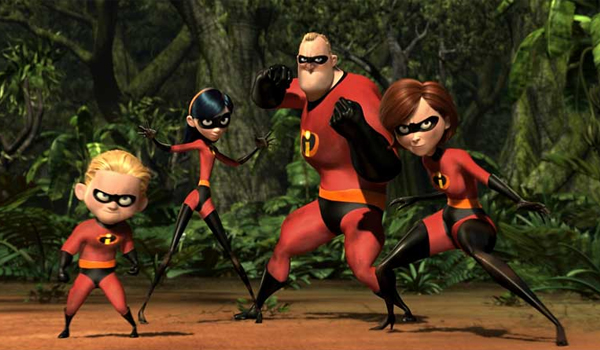 The Incredibles prepare for battle

The Incredibles came with Pixar’s first ever talkie short Boundin’. A musical tale featuring a jackalope teaching a sheep the joys of bounding. The Incredibles was the biggest technical achievement the studio had done at the time. Humans were always either side characters or non-existent. Making an entire human movie proved very challenging. To the point animators thought live-action made more sense. The computer animation used for skin, clothing, and especially hair was all groundbreaking. Not to mention the impressive water, explosions, and superpowers that were all rendered perfectly. The best decision by Brad Bird was making all the characters stylized. Since all other films stuck to realism. Giving computer animation a chance to get creative. Although it seemed like Pixar was deviating from their winning formula, superheroes (or supers) were still distinct characters to focus on.

In The Incredibles, a Golden Age of supers from the 50’s protect the world from danger. Beginning with a series of interviews that shed light on supers. Craig T. Nelson has the right vocal strength for a hero like Mr. Incredible. A super with super strength and a snappy blue costume. He saves the day in his incredible transforming Incredicar, but he carelessly brushes off an adoring fan attempting to be his sidekick IncrediBoy. On a particularly crime filled night, Mr. Incredible also finds time to flirt with his fiancé Elastigirl. Holly Hunter’s voice is well suited for animation, so she makes a perfect Elastigirl. A super with an uncanny stretching ability that’s also better suited for animation. Although her name was exactly the same as the Doom Patrol character. So she had to go by Mrs. Incredible in promotional material.

If a criminal shootout with the police wasn’t enough, then Mr. Incredible saving a suicide jumper is enough to establish the grown up tone. Mr. Incredible is greeted by the supervillain Bomb Voyage, who slips a bomb onto IncrediBoy when he flies in on rocket boots that he invented himself. The explosion takes out a train track and Mr. Incredible stops the train in a manner that had to have been referencing Spider-Man 2. Then he arrives late to his wedding which is attended by other colorful costumed supers. Of course the respectable cast would be incomplete without Samuel L. Jackson. Voicing the first black Pixar character. Frozone is a cool as ice super and Mr. Incredibles’ best friend who creates ice from moisture in the air. The Incredibles has many similarities to the graphic novel Watchmen. Mr. Incredible and other heroes are sued for damages and maintain their secret identities thanks to a superhero relocation program. Luckey himself voices Rick Dicker, a government agent who handles the coverups.

15 years and 15 pounds later, Bob Parr tries to live a normal mundane life with his wife Helen, daughter Violet, and sons Dash & Jack-Jack. The entire family is dealing with problems that really flesh them out. Showing a family of superheroes to be more than just a gimmick. Bob deals with a corrupt insurance agency ran by an angry boss. Bob tries to stay strong for his family, but his tiny car and constant need to save people is draining the life out of him. Helen is a proud mother and homemaker who stretches herself in multiple directions for her family. Not only is she one of the best animated moms, she has the curves that make her one of the hottest as well. Dash is a highly energetic 10 year old whose main concern is finding an outlet for his superspeed. Spencer Fox had just the right enthusiasm in terms of Pixar kids. Violet is your average insecure teenager who just wants to disappear and put up barriers. So she can turn invisible and create force fields. Noticing a clever pattern here?

Sarah Vowell isn’t exactly an actress, but her voice was perfect for the closed off Violet. Her long black hair that covers her face was the biggest animation difficulty. The family is obviously modeled after the Fantastic Four. With each member fitting their specific powers. Apart from Dash, who’s more like the Flash. Baby Jack-Jack seems to be normal, but an explanation can be found in the hilarious tie-in short Jack-Jack Attack. Bob deservedly throws his boss through the wall and he receives an assignment that will allow him to be a hero again. The top secret organization found him after he and Lucius secretly saved civilians from a burning building. The sexy ambiguously brown silver haired Mirage tasks Mr. Incredible with taking down an Omnidroid in the jungle. A spherical tentacle robot that adapts to survive. Although rusty and overweight at first, Bob outwits the robot.

Beginning a midlife crisis that gives his wife and family more attention. He also works out at a trainyard. Since his old suit was ripped he goes to visit Edna Mode. An eccentric professional super suit designer modeled after Edith Head. She was voiced by Bird himself who made her the most quotable character in the movie. Thanks to her fun observation of supers who wear capes. The matching red costumes are iconic in their own right. Bob’s constantly leaving to go on “business trips,” starts to look like an affair between him and Mirage, but they never go that far. While on an assignment, Mr. Incredible finally meets the main villain at his island lair. Syndrome is both the best Pixar villain and a great supervillain overall. Jason Lee brings a fanboy energy to Buddy, the boy who lost faith in his idol. Becoming a weapons inventor who aspires to rid the world of supers by becoming one himself. It’s an evil plan that resulted in the mass genocide of supers before Mr. Incredible.

Syndrome is a goofy, but genuinely threatening foe who flies in more advanced rocket boots and uses zero point energy. Mr. Incredible sneaks into his lair after he’s presumed dead and is only discovered when Helen attempts to contact him. She receives unwanted super suits from Edna that the kids discover. Leading them to tagalong on her plane. Things get dark when a captured Mr. Incredible thinks they were killed in an explosion. Instead, Helen, Dash, and Violet make it to the island were they cope with Syndrome’s ruthless henchman. Who are more than willing to kill them. Elastigirl stealthily makes it through the lair where she finds her husband. Dash goes so fast that he runs on water and Violet gains self-confidence by creating a perfect forcefield. The real money shot is all the Incredibles fighting side by side together. Syndrome captures them all, but his plan to stop the Omnidroid fails.

The family escapes on a makeshift RV attached to a rocket on route to the robot that’s destroying the city. Frozone joins the fight as well after hilariously asking his wife for his super suit. The climax is an incredible blend of powers that results in the robots demise, but Syndrome has one last plan to kidnap Jack-Jack. The entire theater erupted when Jack-Jack’s many powers were revealed. Resulting in Syndrome’s horrific death by cape. In the end, Dash gets to join the track team, Violet gets a date with her crush, and the Underminer gives the Incredibles a chance to be super again. There may not be a Pizza Planet truck, but John Ratzenberger always needs a Pixar role. The Incredibles is only supported by a super orchestral soundtrack that became iconic for the new superhero team. Video games, tie-in comics, merchandise, The Incredibles was something Pixar hadn’t seen before. Inciting deeper discussions and admiration that weren’t common for animated kids movies. Let alone action-packed superhero flicks. The Incredibles deepens what it means to be a superhero, to incredible results. 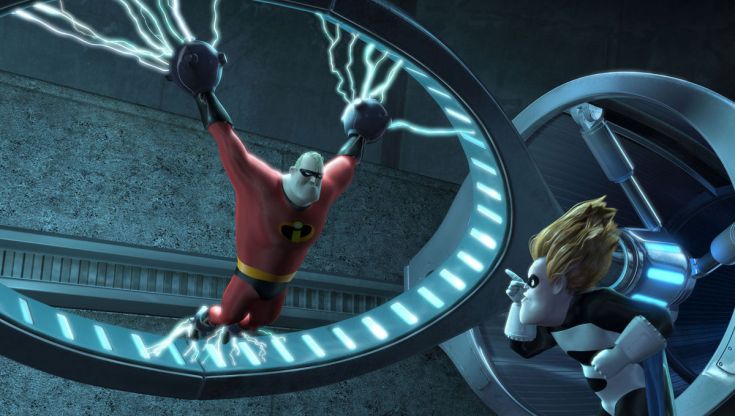 4 thoughts on “It’s a Whole Family of Supers!”