Chinatown is often considered to be one of the greatest films of all time. With what many have called the greatest screenplay ever written. It’ll probably take a few more viewings for me to fully embrace that claim, but I agree that it would have definitely won Best Picture if not for The Godfather Part II. The only Oscar win went to Robert Towne for Best Original Screenplay. I don’t normally mention screenwriters, but Towne’s subversive tribute to the noir genre of yesteryear is impressive to be certain.

Chinatown actually barely spends anytime in Chinatown. It’s more of a clever metaphor for the harsh reality of the world. Something director Roman Polanski knew all too well in what would turn out to be his final American film. Jack Nicholson delivers one of many great performances as J.J. “Jake” Gitties. We exclusively follow the private investigator’s point of view as he’s roped into a tangled web of scandal, deception, and shocking family secrets. I never knew the central conflict revolved around a water crisis. A client of Gitties leads him on a trail that soon reveals the murder of a key figure in the water scandal.

Faye Dunaway’s Evelyn Mulwray is presented as a standard black widow femme fatale love interest, but she’s far more complex than that. Gitties’ nosey investigation earns him an iconic nose injury and increased danger that nearly costs him his life. Classic noir director John Huston is Evelyn’s corrupt father and an unexpectedly convincing villain. I won’t dare give away the twist, but the explosive tragic ending sealed it as one of the greats. Ending on those famous final words, “Forget it Jake, it’s Chinatown.” But the impact of Chinatown will never be forgotten. 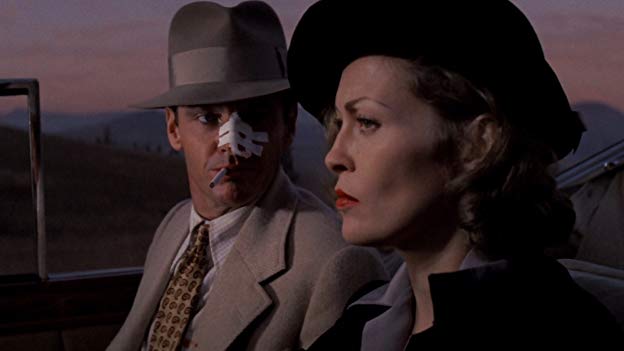