Schindler’s List is the definitive take on one of the most horrifying periods in human history. The Holocaust would be a difficult subject for any filmmaker, but it was deeply personal for Steven Spielberg. As a jewish man himself, he wasn’t even sure he was mature enough to properly tell the story. He didn’t even accept a paycheck. Schindler’s List focuses on events surrounding German industrialist Oskar Schindler. A member of the Nazi party who saved the lives of over a thousand Jews. It took a lot of mental preparation for me to finally decide to watch Schindler’s List. Although I had watched a small chunk of the 3 hour movie in school.

Schindler’s List is almost entirely black & white, because there is no color in a period like this. Matched by a more somber score from John Williams. My heart raced anytime the Nazis carelessly executed innocent Jews, whenever they were forced into labor, forced to hide, and especially during the Kraków ghetto liquidation. My heart sank the most as soon as Auschwitz appeared on screen. Although it’s impossible not to be depressed, Spielberg finds a way to bring humanity to the surface. In a way that made it easier to get through than I expected. Jews are given time to breath and ultimately given hope. Liam Neeson does the impossible by giving an understandable nature to someone like Schindler.

Employing Jews to work in his factory is just business at first, but his Jewish accountant played by Ben Kingsley gives him a different perspective. What truly pushes him towards redemption is a symbolic little girl in red representing innocences. Ralph Fiennes similarly gives three dimensions to an evil Nazi who could have just been a two dimensional monster. Schindler does save the Jews in the end, but he still breaks down at the thought of saving more. Ending with a humbling sequence of the real life survives paying their respects to their deceased hero. Schindler’s List was the most fitting movie by Spielberg to win Best Picture. Schindler’s List is mandatory viewing for people who need to learn from the horrors of the Holocaust. 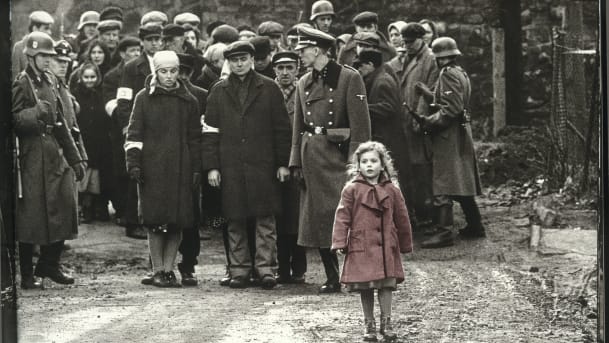 A girl in red walks through the Kraków ghetto

5 thoughts on “The Horrors of the Holocaust”