Logan marked the end of Hugh Jackman’s 17 year tenure as Wolverine. The longest time any actor has played a Marvel superhero. I was there from the very beginning. Seeing X-Men in theaters at the age of 5. Unaware I’d be seeing the same franchise go on for nearly 2 decades. Yet Hugh Jackman remained dedicated every step of the way. Appearing in 8 separate X-Men related movies. Unlike just about every superhero trilogy, Wolverine’s solo outings are a rare example of a trilogy getting better with each installment. X-Men Origins: Wolverine was critically panned, The Wolverine was mostly mixed, and Logan is critically acclaimed. It’s one of the best superhero movies ever made and the best reviewed movie in the franchise. Becoming the first comic book movie nominated for Best Original Screenplay.

Like with most long running characters, Jackman knew it was time to stop. So Jackman, The Wolverine director James Mangold, and 20th Century Fox sought to make a deeply personal R rated swan song. I was lucky to have grown up watching X-Men, because there’s no way I would’ve wanted to miss going to the theater to see it. Unlike Deadpool that motivated it, Logan is dark, depressing, and so serious they don’t even use his superhero name. With older Johnny Cash setting the mood. Logan is very loosely inspired by Old Man Logan. An excessively violent graphic novel from the demented Mark Millar. The only similarities are a dystopian future, a road trip with an old friend, hope found in a young child, and an aging Wolverine known only as Logan… 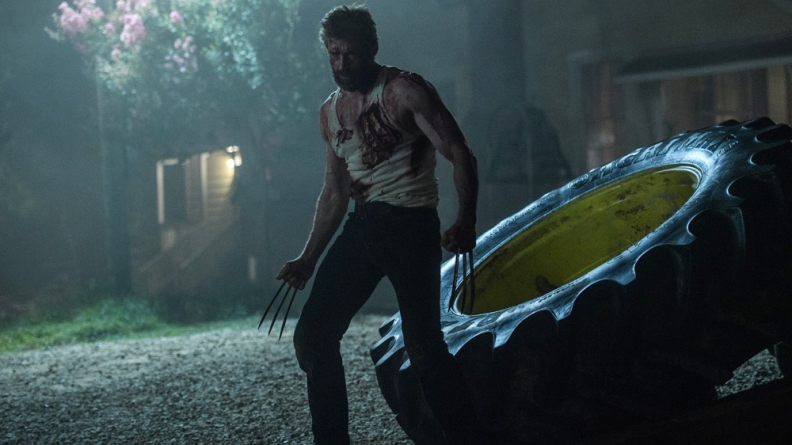 Logan takes full advantage of the grim tone found in Old Man Logan. I knew that had to be the storyline adapted. Since Wolverine’s origin, time in Japan, and older years are his 3 biggest storylines not involving the X-Men. Although I had the opportunity, I chose not to read the comic prior to seeing the movie. Mostly because Mark Millar’s mature comics disgust me. Old Man Logan is a lot crazier than you’d think it would be. Utilizing the entire Marvel universe in an alternate dystopian future ruled by supervillains. Logan refuses to use his claws after accidentally killing all the X-Men. He accepts a job driving a blind Hawkeye across the territory and fights a gang of inbred hillbilly Hulks. Ending with a fight to the death with an insane older Hulk. With the only hope being a baby Hulk that he takes in. Obviously there’s no way a story like this could’ve been made.

Logan instead follows an aging Logan in the year 2029. Mutants are all but extinct with the X-Men killed in a devastating accident. Although it’s not quite a dystopian future for everyone else. Logan earns money as a limo driver in Texas. Logan is distinctly western both in feel and style. There are no major special effects or massive set pieces. Since Hugh Jackman ages as slow as Wolverine, makeup and CGI were used to age him. His beard and short hair was made to resemble the comic, but he still needs a widows peak. Right off the bat the film takes advantage of its R rating. Something Jackman had been wanting for a long time. Now his Adamantium claws slice off limbs, graphically cut into people, and leave scenes drenched in blood. Almost resembling a slasher movie at times. Wolverine already started dropping F bombs, but now he swears almost constantly. A quick boob shot is even through in just because. Along with failing eyesight and drowsiness, Logan drinks to suppress the pain of his diminishing healing factor.

If you think that’s depressing, Professor X is even worse. I can’t say I was expecting Patrick Stewart to return, especially for a story like this, but Logan would be incomplete without him. Logan’s relationship with Charles Xavier has been important from the very beginning. Charles has sadly become stricken with devastating seizures that affect his mental powers. Causing intense pain to anyone within close proximity. Logan is the only one who can get close enough to be his caretaker. Although Caliban appeared in X-Men: Apocalypse, Fox continued not bothering with continuity. This time Caliban is helping Logan subdue Charles’ powers. He just can’t go out in the sun. Logan’s only goal is making enough money to buy a boat for him and Charles. Conflict only comes when a Mexican woman comes to him with a job. The job is taking Gabriela and little girl Laura across the border to Eden. Gabriela formerly worked for Alkali-Transigen. A facility cloning new mutants to be used as living weapons.

Since every other Wolverine character had been done up to this point, the only remaining character was X-23. A younger female version of Wolverine created for the animated series X-Men: Evolution. She soon crossed over into comics and became a much more complex character with a tragic past. Laura is a significantly younger 11 year old who doesn’t speak, but has all the aggression of her biological father. She’s being hunted by her handler Donald Pierce. One of the few remaining X-Men villains who leads the cybernetically enhanced militant group the Reavers. They’re lead by Dr. Zander Rice. The man behind the fall of the mutants. Logan is very reluctant to help, but Charles is there to convince him otherwise. Forming a telepathic bond with Laura, offering her a family, and promising to take her to Eden.

The truth comes out when Laura’s duel claws come out. Seeing kids in violent situations usually makes me uncomfortable, but it’s understandable. In a way, Logan is a lot like The Last of Us. Newcomer Dafne Keen is more than up for a role this mature and her innocence does shine through. Logan, Charles, and Laura escape from the Reavers and set out to their destination. Unfortunately, Caliban is captured and used to track them. Logan finds the same coordinates to Eden in an X-Men comic. Authentic looking comics that had to be made for the movie since Marvel couldn’t allow the real thing. They survive a seizure attack in Oklahoma City and make an ill advised stop at a friendly families ranch. Taking a breather and helping with their problems, but ultimately being discovered.

SPOILER ALERT! Since Wolverine movies never have great villains, Logan continues that tradition with a younger clone of Wolverine called X-24. The twist is the only downside to an otherwise excellent Wolverine movie. Since it really should have been Sabretooth. X-24 is responsible for the second, far more tragic death of Charles Xavier. A bloody confrontation leaves the clone mangled and gives them a chance to leave. After burying his friend, Logan grows more enfeebled. It’s then that Laura finally speaks and forces him to drive to Eden. Which turns out to be a real place containing Laura’s fellow Mutant’s from the facility. It’s there she discovers an Adamantium bullet he kept for himself and a serum that temporarily enhances abilities.

When the children are discovered, Logan uses it to unleash his berserker rage one last time. The mutant kids use their powers on the Reavers and Laura fights side by side with Logan. When Rice and Pierce are killed, X-24 overwhelms Logan, and fatally impales him on a tree branch. After decades and decades of fighting, that’s enough to kill him. Laura uses the Adamantium bullet on X-24 and tearfully says goodbye to her father. As sad as the moment is, it’s even sadder when you realize Yukio’s prediction was correct. Ending with a funeral that honors the fallen X-Men. Logan is a fitting send off for such a beloved superhero and performance. Although Jackman never wore the iconic yellow & blue costume, he always captured the essence of Wolverine. No matter the struggle, demand, or quality of the movie, Hugh Jackman will always be Wolverine. Logan is the highest possible note Fox should have ended their franchise on.

Logan and Laura bury a friend