The Twilight Saga: Breaking Dawn – Part 2 finally put a steak through this endless vampire romance. Satisfying Twihards and giving general audiences a collective sigh of relief. Bill Condon is the only director to do more than one Twilight movie and Stephanie Meyer even received a producer credit for the finale. A finale that I knew I needed to see in theaters. I just knew it would be the main topic of conversation in high school. The Twilight Saga may have been loved by teenage girls everywhere, but Robert Pattinson, Kristen Stewart, and Taylor Lautner had to live with the consequences. Although Twilight was always a favorite at the MTV Movie Awards, it was also a Razzie darling. It wasn’t until Breaking Dawn – Part 2 that they finally won Worst Picture. Kind of like how Return of the King won the top spot for its franchise. At this point it was just fun to laugh at how ridiculous everything became. Part 2 picks up immediately after Bella becomes a vampire. The obvious point to divide the films. Her transformation is just as over-the-top as I expected with Stewart continuing to give her worst performance. Bella’s vampire power is shielding herself from other vampire powers. The reason Edward was never able to read her mind.

Since baby Renesmee is a fully aware half-vampire they had to use CGI. The most horrifically awkward CGI imaginable. Although they try really hard to justify him as a loving protector, Jacob imprinting on Renesmee is the thing that ends the forced love triangle. Still somehow creepier than a hundred year old vampire falling in love with a teenage girl. Although Bella being a vampire does mean they can be as intimate as they want. Jacob just makes it more difficult when he reveals his werewolf form to Charlie. Even more difficult when they have to hide Renesmee’s unusually rapid aging. But Charlie still has his daughter, granddaughter, and a happy ending with Harry Clearwater’s widow Sue. Mackenzie Foy plays the child version of Renesmee. She’s young, but just as poorly acted as her parents. It all seems perfect, but bitter vampire Irina brings Renesmee to the Volturi’s attention. Mistaking the half-vampire for an immortal child. In order to fight the accusation, the Cullens have to assemble an army of vampire witnesses from across the world. Narration really speeds through characters that are likely more complex in the book. There are so many mostly forgettable vampires from the already established Denali coven to places as far as Egypt, Ireland, England, and the Amazon. With powers ranging from electricity to mental projection. Future Oscar winner Rami Malek actually has the power to control the elements.

Jacob trains his own wolf pack, but still receives help from Sam’s pack. Rosalie cares for Renesmee and Emmett protects the family, but Alice and Jasper mysteriously leave in the middle of recruitment. Leaving clues that block out the mental intrusion of the Volturi. Bella secretly receives passports from J. Jenks in order to ensure Renesmee’s future. Aro, Jane, and the rest of the Volturi are met with a large assortment of vampires and werewolves as they arrive at a snowy field. Michael Sheen really hams it up with big bad Aro having a hilariously out of nowhere laugh. Renesmee uses her power to show Aro her memories of growing as a half-vampire. Irina is burned as punishment, but Alice and Jasper return before further bloodshed. Alice’s visions aren’t enough to prevent a full scale battle that had the entire theater erupting with shock. Since a physical battle was never in the book. SPOILER ALERT! Aro actually decapitates Carlisle, Alice is forced to watch Jasper die, Seth is killed as a wolf, and Leah dies saving Esme. It’s traumatizing, but at least Jane, Alec, and the rest of the Volturi are killed in the most satisfying way possible. Ending with Bella and Edward killing Aro before the unexpected twist that it was just Alice’s vision. I should be mad that none of it mattered, but I have to applaud the clever deception. A Native American half-vampire convinces the Volturi that there’s no threat. Ending with an optimistic future for Jacob, Renesmee, Edward, and Bella. “A Thousand Years” caps off the saga with a unique credits sequence that includes every actor in the series. Breaking Dawn – Part 2 will forever remain a guilty pleasure. 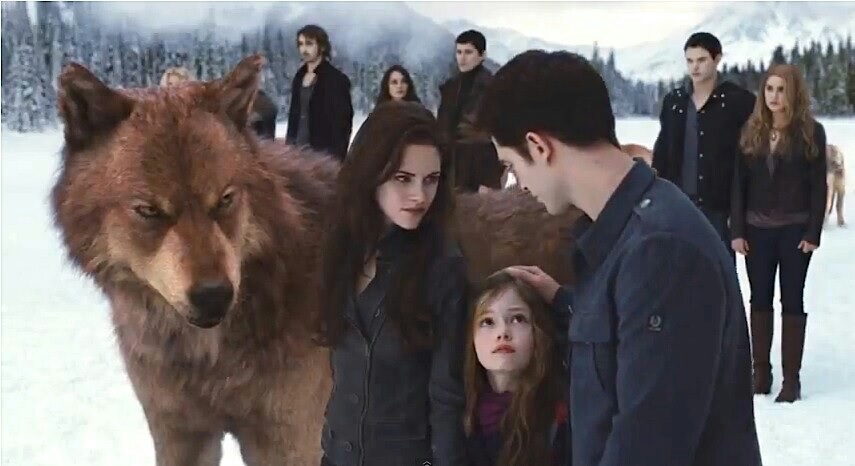