Shrek is the greatest subversion of fairy tales I’ve ever seen. Although it’s technically their fifth production and second computer animated film, Shrek will always be the poster ogre for DreamWorks Animation. Since Shrek was the first animated movie to win the much needed Academy Award for Best Animated Feature. Making them genuine competition for Disney and Pixar. I may have grown up loving all things Disney, but DreamWorks was never far behind. Despite the obvious heated rivalry between the studios. Shrek! was originally a crudely drawn children’s book by William Steig.

Steven Spielberg himself bought the rights with the intention of making it a traditionally animated movie. Former disgruntled Disney chairman Jeffrey Katzenberg promptly acquired the rights to Shrek and intended to make a computer animated movie with Chris Farley as the ogre. When Farly passed away, the role was recast instead. So fellow SNL star Mike Myers took over and the rest is history. The humorous spin on fairy tales may take several jabs at Disney, but Shrek works because they never forget to tell a sincere story with a genuinely lovable unlikely hero. We have Shrek to thank for popularizing innuendos in kids movies, pop culture references, and upbeat pop music soundtracks for animation…

Shrek was a very prominent edition in my VHS collection growing up. The tape included a fun karaoke short film. I was 5 when Shrek came out in 2001, but I remember every detail of seeing it. My dad took my brother and I to see it in theaters and we’ve been watching it non-stop ever since. We bought Shrek toys, merchandise, and I frequently quoted the movie around the school yard. Shrek is practically the animated movie of my generation. Since its inspired countless memes and a large internet presence. DreamWorks really knew what they were doing when they created Shrek. Once upon a time, there lived a beautiful princess trapped in a castle guarded by a dragon awaiting true love’s kiss. At least that’s how it would start if Shrek wasn’t the one reading the fairy tale.

With a flush of a toilet we’re given one of the greatest animated character entrances of all time. As Shrek goes about his gross morning routine to the tune of “All Star” by Smash Mouth. Shrek is the most iconic ogre of all time. He’s a fantasy creature that hasn’t gotten much attention in the past. Shrek is large with distinctly green skin, trademark horn ears, a snazzy fairy tale outfit, and is far less hideous than his book counterpart. Although Chris Farley gave it his all, Mike Myers will always be Shrek. Using his signature Scottish accent was a stroke of genius that made Shrek an even bigger icon worthy of imitating. Like most ogres, Shrek spreads fear and just wants to be left alone in his swamp home. Until fairy tale creatures end up on his doorstep.

All well known fairy tale creatures are outlawed by the kingdom. There’s the Seven Dwarfs, Tinkerbell, the Three Bears, the Three Little Pigs, and even Gepetto giving away a lying Pinocchio. I love Disney, but I can’t resist a good joke at their expense. The most out of place creature is a certain talking jackass named Donkey. Eddie Murphy is no stranger to voicing animated comic relief, but his comedy stylings are perfectly suited for the adult edge of DreamWorks. When Shrek and Donkey literally run into each other, it starts one of the funniest buddy duos in animation history. Their initial meeting is so quotable that Shrek was also nominated for Best Adapted Screenplay. A rare Oscar acknowledgment for animation. Shrek sees Donkey as just another annoyance at first, but they’re forced to be together when his swamp fills up with even more fairy tale creatures. Including the Three Blind Mice, the Big Bad Wolf, the Good Fairies, and so much more.

They’re all thrown out of the kingdom by the villainous Lord Farquaad. A not so subtle jab at current Disney chairman Michael Eisner. Farquaad is a diminutive little creep who hates fairy tale creatures and wants to be king. John Lithgow makes him all the more hilarious with his torture of poor Gingerbread Man Gingy. Their “Muffin Man” exchange is comedy gold. Farquaad uses the Magic Mirror to find a princess à la The Dating Game. His choices are Cinderella, Snow White, and the original Princess Fiona. His scene stealing minion Thelonious helps him make the obvious choice. Farquaad’s kingdom is a further jab at Disneyland complete with mascot and an annoyingly catchy “It’s a Small World” parody. Shrek starts to win over the crowd when he and Donkey beat a bunch of Farquaad’s knights pro wrestling style.

Although his only intention was getting his swamp back, Shrek is instead sent on a quest to rescue Princess Fiona. Shrek and Donkey eventually make it to the dark and spooky castle. The Dragon seems like a major threat, but all that changes when Donkey discovers she’s a girl dragon. Starting one of the weirdest interspecies relationships in movie history. Shrek makes it to the tallest tower, but an ogre wasn’t exactly what Fiona was expecting. Of course the most Disney jokes come from Princess Fiona. Whether she’s exploding a bird with her singing or awaiting true love’s kiss. However, Fiona is a tough sassy princess with a red braid and signature green dress. Cameron Diaz rounds out the early 2000’s cast with some of her best work yet. Fiona judges Shrek for being an ogre until she overhears him talking to Donkey at night. Shrek has layers just like an onion and only wants to be accepted.

So Shrek and Fiona start to bond over their shared grossness. Gross out gags work really well when the lead character is an ogre. Fiona shows another side of her when a French Robin Hood tries to sweep her off her feet, then sings his impromptu theme song. One Matrix parody later, Fiona shows off her unexpected fighting skills. They may be an ogre and a human, but Shrek and Fiona’s unconventional budding romance is genuinely sweet. Until sundown ruins it for the both of them. Since it turns out Fiona secretly becomes an ogre every night. A misunderstanding keeps them apart, but Donkey talks some sense into Shrek, and Dragon helps them stop the wedding. Farquaad is finally defeated when Dragon eats him and the spell is broken with true love’s kiss.

Except the twist is Fiona remaining an ogre and both of them accepting each other for who they are. A big fairy tale party breaks out as Shrek and Fiona are married to the infectious tune of “I’m a Believer” and they lived happily ever after. Shrek has a strong story, hilarious jokes, and an awesome soundtrack, but none of it would’ve mattered without equally amazing animation. The computer animation has aged surprisingly well since 2001. The Pacific Data Images animation used by DreamWorks was pretty much on par with Pixar. The difference was how realistic they tried to make hair, fur, clothing, and skin. Although humans can be a bit rough at times, they make up for it with several well rendered fairy tale backgrounds and locations. Shrek is a pop culture phenomenon that put DreamWorks on the map. 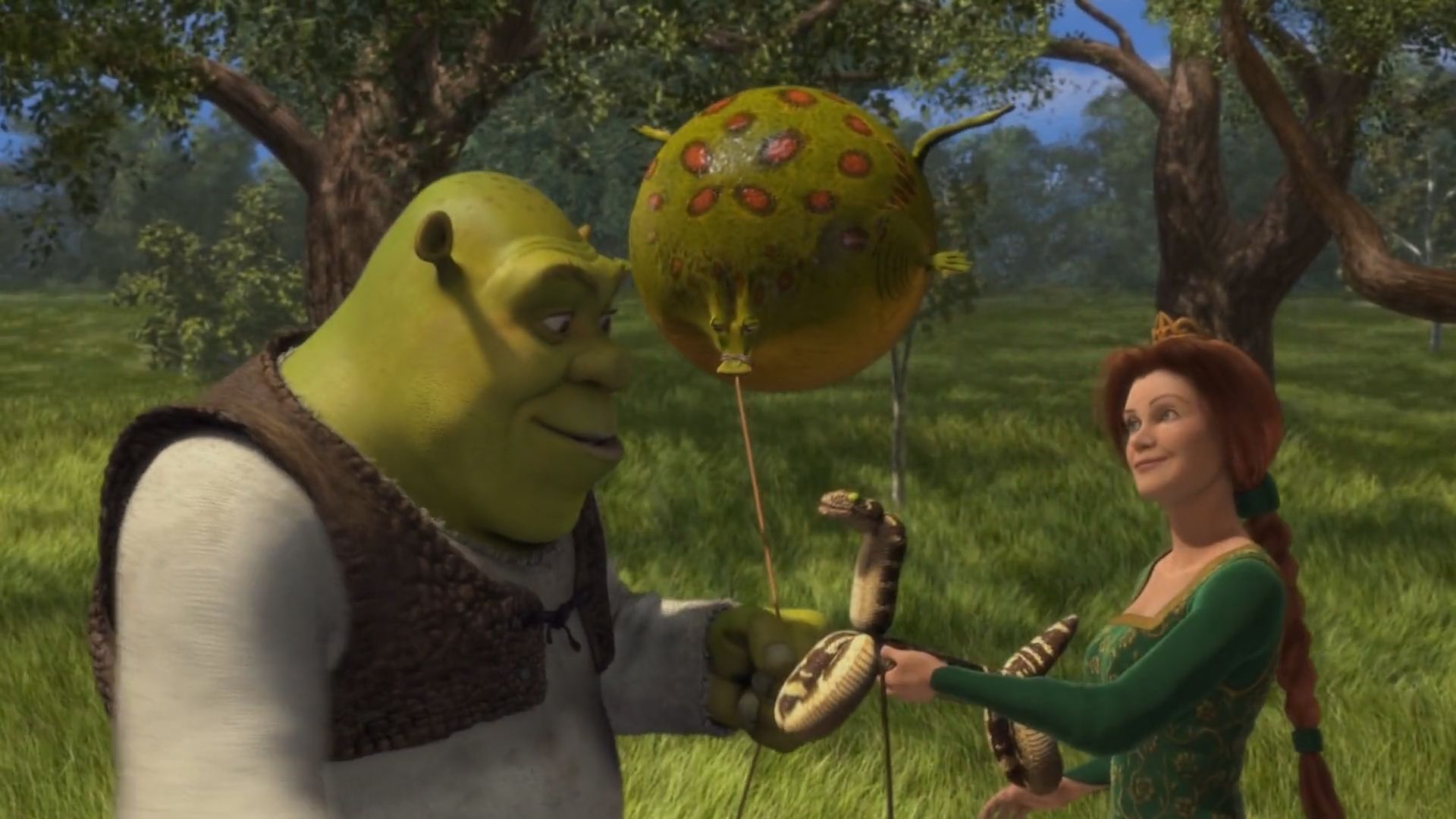 4 thoughts on “What are You Doing in My Swamp?!”