Star Trek Into Darkness may divide longtime Trekkies, but it’s just as spectacular as the 2009 reboot. Even if it is practically a remake of Star Trek II: The Wrath of Khan. J. J. Abrams and the rest of his producers were all asked to return for a sequel. Along with the newly endearing cast of Chris Pine, Zachary Quinto, Karl Urban, Zoe Saldana, Simon Pegg, John Cho, and Anton Yelchin. The lens flare obsessed Abrams directed Super 8 in the meantime, since the story was so difficult to figure out. Klingons were discussed as always, but everyone was adamant about bringing Khan Noonien Singh back to the franchise. Although it could’ve led to a direct rip-off, Into Darkness has enough surprises to make it fresh.

The other difficulty was figuring out the right title. Since the previous movie was simply called Star Trek, it wouldn’t have made sense to call it Star Trek II when this was technically the twelfth installment. Star Trek Into Darkness is an unusual title with no colon that suggests dark tidings are on the horizon. Although the sequel is more intense, the humor and optimism of Star Trek is very much intact. After deciding to watch Star Trek not long after it came out, Into Darkness was finally enough to get my brother and I to see a movie in theaters. It was the right decision since Into Darkness was presented in 3D and became the highest grossing film in the franchise… 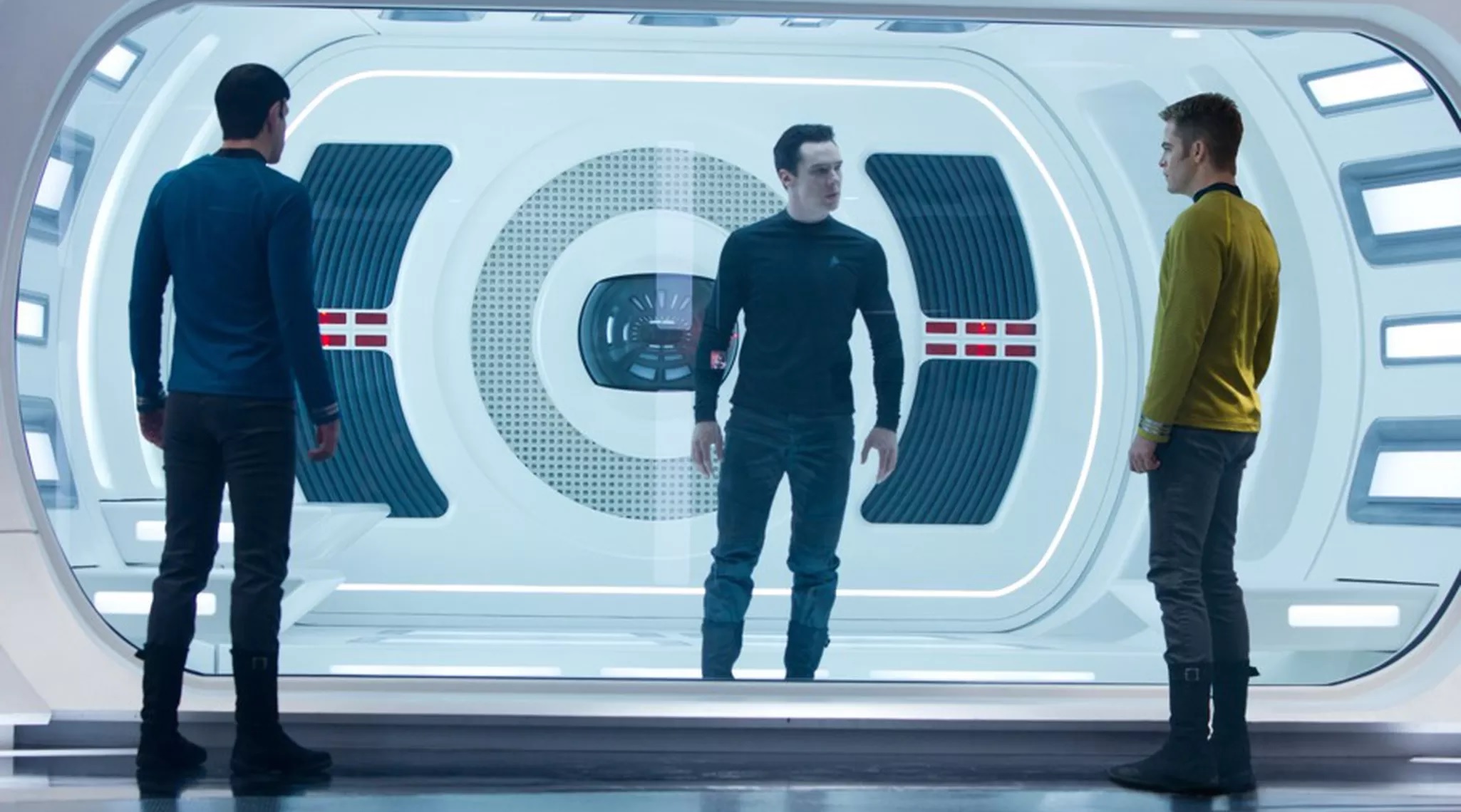 Star Trek Into Darkness takes place in what is now known as the “Kelvin” timeline. Although the timeline led to the formation of the USS Enterprise and her crew, changes can still occur that weren’t meant to happen as early as they were. Which is why Khan can appear despite meeting Captain James T. Kirk when he was discovered in “Space Seed.” Some Trekkies and even George Takei himself felt that using the character was just a marketing tactic. Although I can see where they’re coming from, the movie does attempt to make it a surprise. Even though you can see the twist coming from a mile away.

Captain’s Log, Stardate 99126.76: Into Darkness begins just like an episode of the original series. Captain Kirk & Dr. McCoy are humorously being chased by a primitive culture on the planet Nibiru. A red floral planet with native chalk white inhabitants. The Enterprise in concealed underwater and Spock is fitted with a containment suit that he uses to drop a cold fusion device into an active volcano. Every Trekkie knows that the Prime Directive of non-interference is the most serious law in all of Starfleet. Although Spock says the famous line, “The needs of the many outweigh the needs of the few,” Kirk breaks the Prime Directive anyway to save his friend. Leading to the Nibirans worshiping the Enterprise.

It’s more of an unconnected cold opening, but it does serve the plot. It’s followed by a lengthy, almost silent sequence where a Starfleet officer and his wife look after their sick daughter. John Harrison shows up to save his daughter in exchange for the officer bombing Section 31 in London. An important Star Trek location I’m not familiar with since I haven’t seen Deep Space Nine or Enterprise yet. Although the terrorist calls himself John Harrison it was obvious from the start that Benedict Cumberbatch was playing Khan. Despite making a name for himself on Sherlock, Into Darkness was really Cumberbatch’s big break in a Hollywood blockbuster. Although he isn’t Hispanic like Ricardo Montalban, his performance is menacing, calculating, and compelling in a more ambiguous way.

Jim and his crew return to Earth where he’s first seen sleeping with alien twins who have tails. Kirk is demoted by Admiral Christopher Pike for his reckless disregard of the Prime Directive and Spock is sent to another ship. It’s more clear now that Kirk & Spock are close friends by the way they discuss whether what they did was right. When Starfleet learns about the bombing, they hold an emergency meeting that Harrison attacks. Pike’s death was obvious since he had one final heart to heart with Jim. Another deviation from the original timeline considering Pike was given a new chance at life in “The Menagerie, Part II.” Harrison escapes using a transporter so powerful, it’s a wonder the Federation continues to use starships. Since Harrison transports from Earth, all the way to Kronos. Kirk’s primary struggle is his quest for vengeance at the expense of his leadership.

RoboCop himself Peter Weller plays Admiral Alexander Marcus. He returns Kirk & Spock to their original positions aboard the Enterprise and orders them to take out Harrison using 72 specialized stealth torpedos. The entire crew has time to shine, but most of it is due to  Kirk’s impulsive decisions. Bones tries to give Jim medical tests, uses several southern metaphors, and continues to quarrel with Spock over his logical thinking. Scotty unexpectedly resigns along with his assistant Keenser when he questions the untested danger of the torpedos. Pegg had less time in the 2009 reboot to make an impression, but now Scotty is more crucial to the mission when he’s no longer on the ship. Kirk immediately names Chekov chief engineer despite his limited experience training under Scotty.

Sulu gets his moment when he sits in the captain’s chair. A reference to his future as captain of his own ship. Sulu threatens to fire on Harrison if he doesn’t willing come with their away team. Since Harrison is on Kronos, that meant the long awaited return of the Klingons. The fan favorite race was supposed to appear in the previous movie, but they were cut. Kirk, Spock, and Uhura are instead sent to their planet in disguise in order to avoid a war. Klingons have the same ridges they always do, but the only one we fully see is both bald and sporting rings in his forehead. Uhura shows off her important linguistic skills by speaking Klingon, but she also spends most of her time arguing with her boyfriend Spock over his disregard for his own life. Harrison takes out the ambushing Klingons and willingly surrenders to Kirk when he learns how many torpedos they have.

In order to discover more about their enemy, Spock suggests the ship’s secondary science officer. Alice Eve uses the name Carol Wallace, but she’s really playing other important The Wrath of Khan character Dr. Carol Marcus. Daughter of Alexander Marcus who snuck aboard the Enterprise to study the torpedos. Kirk didn’t second guess her presence since she was another pretty face. Something the movie takes advantage of in a gratuitous, but entirely welcomed scene of Alice Eve in her underwear. Dr. Marcus & Dr. McCoy perform a dangerous procedure where they attempt to open a torpedo. Only to discover a cryogenically frozen body on the inside. No Trekkie is shocked when Harrison finally says “My name is Khan.” Making this the only theatrical film to have Kirk face to face with his longtime rival.

Khan explains his history as a superhuman with a crew that was cryogenically frozen, but the main difference is Admiral Marcus being the one who woke them up. Marcus appears to be the real villain who used Khan to develop weapons that could ignite a war with the Klingon Empire, and used his crew as leverage against him. Khan gives Kirk coordinates in an attempt to maintain trust. Scotty becomes important again when Kirk contacts him to track down the coordinates. They end up leading to the enormous USS Vengeance captained by Marcus himself. He damaged their warp core and plans to destroy the Enterprise after ensuring the safety of his daughter. Scotty manages to depower the ship, giving Kirk & Khan enough time to perform a dangerous space jump with a small entry point.

Although Khan appears to be on their side, Spock contacts Spock Prime in order to learn whether or not he’s trustworthy. This was sadly Leonard Nimoy’s final on-screen performance, but at least it was playing the famous Vulcan beloved by generations. Khan shows his true colors when he turns on the crew and kills Admiral Marcus in cold blood. He demands the safe return of his crew, but they trick him by removing his crew and activating the torpedos. SPOILER ALERT! Both ships are damaged, but it’s actually Kirk who sacrifices himself to save the crew after reactivating the warp core in the radioactive reactor. The Enterprise is saved before it can fall to Earth, but Khan uses his ship to cause immeasurable destruction to San Francisco.

The roles are reversed with Kirk giving a heartfelt exchange and Vulcan salute to Spock before dying. It’s similar, but just as effective. Even Spock screaming the name “Khaaan!!!” isn’t too cheesy. Spock vengefully pursues Khan in San Francisco, but their fight is only successful when Uhura beams down to stun him. Probably the most controversial decision was having Kirk come back to life thanks to a Tribble that McCoy tested Khan’s super blood on. Tribbles are a cute callback, but Into Darkness really does open up several possibilities that are never addressed again. As is usually the case with J. J. Abrams. Captain Kirk delivers the famous monologue at the Enterprise re-dedication ceremony and finally embarks on their 5 year mission. Star Trek Into Darkness could never surpass The Wrath of Khan, but its reinvention of familiar ideas succeeds. “Live long and prosper.” 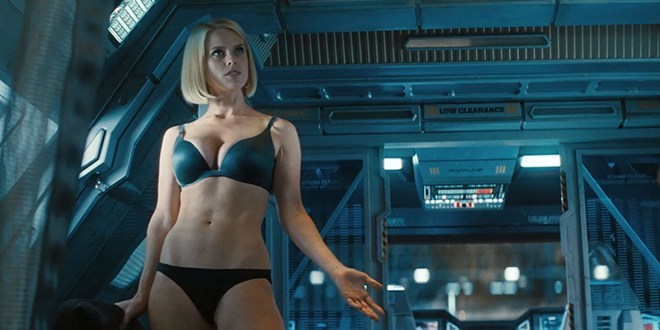 4 thoughts on “My Name is Khan”