The Croods: A New Age continues the DreamWorks Animation tradition of surprisingly strong sequels. I really wasn’t expecting a continuation of The Croods after 7 years. The computer animation has advanced, but it’s not too noticeable. Although I enjoyed the cave adventure and understood its Best Animated Feature nomination, The Croods felt more like a one-off. The family could only be seen again in the traditionally animated Netflix series Dawn of the Croods. Despite the transition from 20th Century Fox to Universal Pictures, a sequel was made, then delayed months later during the pandemic. Unlike Trolls World Tour, A New Age was mainly released in theaters. My brother and I ended up seeing the sequel with our mother and we all found ourselves loving it. A New Age plays to the strengths of the original by doubling the family antics, bizzare prehistoric creatures, absurd humor, and characters.

The Croods leave their beachfront paradise in search of a new home. Nicholas Cage, Catherine Keener, and Clark Duke all return along with the far more popular Emma Stone and Ryan Reynolds. This was sadly one of Cloris Leachman’s final performances before she passed away. The Croods meet their match in the form of the far more evolved Bettermans. Peter Dinklage is the patriarch Phil, Leslie Mann is the matriarch Hope, and Kelly Marie Tran is their daughter Dawn. Since the Croods are mostly confined to the enclosed Betterman complex, more time is spent on each family member. Guy is given a lot of attention with a flashback depicting the loss of his family. Eep & Guy’s teen romance is given just as much attention with Grug fearing they’ll leave the pack. Even Belt gets a romance with a another sloth named Sash.

The Bettermans knew Guy’s family and try to turn him into one of them while condescending the Croods. Grug develops a funny love/hate bromance with Phil. Ugga is mostly protective of her family when Hope looks down on them. Sandy is still a feral baby, but Thunk has a particularly hilarious running gag involving a chicken and staring out a window like a TV. Gran is mostly obsessed with becoming an amazonian Thunder Sister. Although Eep could’ve been jealous of Dawn, they develop a friendship in order to explore the rough outside world. The back in forth between the conflicting cave families is the best addition to the sequel, but the adventure they go on may have been the funniest thing I’d seen all 2020. The fan favorite Punch Monkeys get a lot of attention with a secret plot involving bananas. The crazy climax is so ridiculous that I had to enjoy every minute of it. The Croods: A New Age took a good concept and let it evolve into something much better. 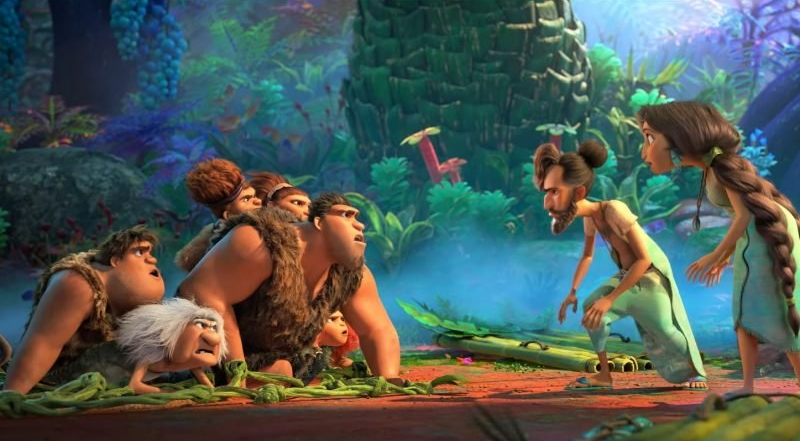 The Croods meet the Bettermans

Preceded by: The Croods

2 thoughts on “The Bettermans”