Scooby-Doo! Curse of the Lake Monster is just another Scooby-Doo mystery in a live-action package. Scooby-Doo! The Mystery Begins had the intrigue of being a made-for-TV prequel with a new cast. Curse of the Lake Monster sounds like something that could’ve been a random direct-to-video animated movie. Not that my brother and I didn’t once again watch the premiere on Cartoon Network. The prequel-sequel follows Mystery, Inc. as they get summer jobs and attempt to become incorporated.

The entire cast obviously returns since it was only a year after the previous movie. Nick Palatas is given more attention as Shaggy, but I constantly asked “Scooby-Doo! Where are you?” I get that his CGI is expensive for a TV budget, but he’s barely relevant to the mystery. As the title suggests, the mystery is who’s behind the Lake Monster that haunts the beach. The humanoid toad monster is controlled by a witch with an obvious identity.

Honestly it’s not as memorable as the movie’s summer love subplots. Robbie Amell and Kate Melton are unsurprisingly paired up as Fred & Daphne. They even get a cute joke of them wearing their cartoon accurate outfits. More surprising is Shaggy being paired up with the brainy Velma when he literally falls for her. Hayley Kiyoko is also given more screen time as Velma that makes it obvious she’s the brainwashed villain. Scooby-Doo! Curse of the Lake Monster is a mostly serviceable kids movie that probably won’t leave an impression. 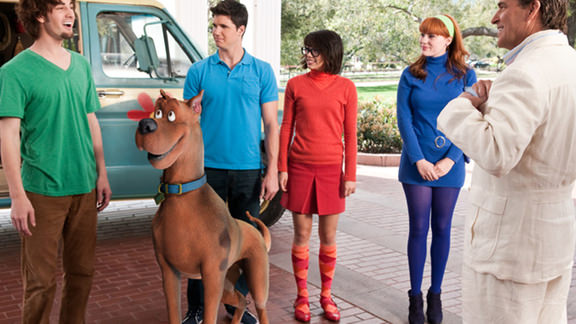 Mystery, Inc. at a country club

Preceded by: Scooby-Doo! The Mystery Begins