Million Dollar Baby packs a serious punch. I haven’t seen much of Hilary Swank, but she’s an actress who always makes her performances count. She’s far from a typical 2 time Best Actress winner. It only took 5 years after Swank won for Boys Don’t Cry. Both films feature an intense transformation that the Academy Awards couldn’t ignore. Million Dollar Baby is the first movie to win Best Picture after the Lord of the Rings trilogy ended. It’s not the greatest boxing movie ever made, but it does go deeper than most. All thanks to the personal Oscar winning direction of the legendary Clint Eastwood. He also produced, starred, and provided the subtle guitar score.

Eastwood is the gruff but good hearted boxing trainer Frankie Dunn. He has his own personal problems ranging from faith to family. Although initially refusing to train a girl, Maggie Fitzgerald is exactly the aspiring young underdog he needs in his life. Together they train and eventually bound over their shared struggles. Similar to her previous award winning role, Maggie is from a trailer park with a scumbag family and has her life cut tragically short. Million Dollar Baby also gave Morgan Freeman the opportunity to finally win an Oscar for Best Supporting Actor.

Former boxer Scrap has great interplay with Frankie, a lovable mentor role with Maggie, and Freeman narrates as well. The role is practically redemption for not winning for Shawshank Redemption. Several before they were famous actors include Jay Baruchel as a more dimwitted aspiring boxer. Plus many future Marvel actors like Anthony Mackie, Michael Peña, and a very skinny Mike Colter. Swank still steals the show with her impressive muscle tone, heartfelt sincerity, and brutal boxing matches against real life female boxers. The ending is heart-wrenching, but the message of Million Dollar Baby is clear to always protect yourself and fight for your dream. 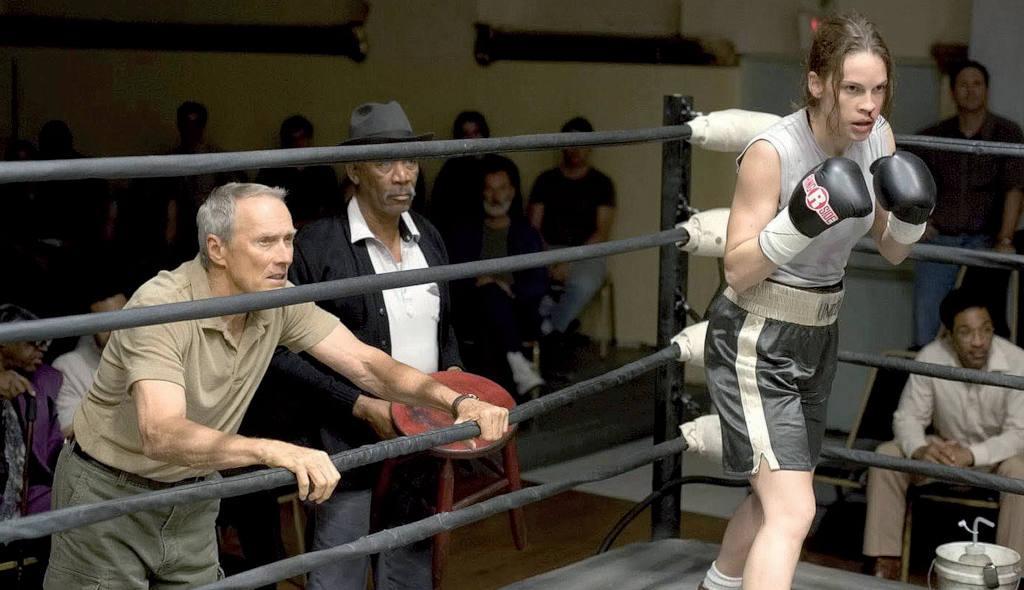 Frankie and Scrap help Maggie in the ring

4 thoughts on “Always Protect Yourself”