Son of Kong is one of the earliest sequels ever made. King Kong was such a big hit that RKO Pictures didn’t even wait a year to make it. Son of Kong was released a mere 9 months into 1933. Despite its close proximity, audiences didn’t embrace it the way they did with the original. Although the runtime is only 1 hour and 9 minutes, I never felt the need to watch Son of Kong until now. Only Ernest B. Schoedsack returns as director, but the production feels almost exactly the same with Willis H. O’Brien continuing to do stop-motion.

A lot of props were carried over from King Kong, but the primary difference is tone. Little Kong is an albino gorilla who is a lot more comedic than his father. His roars are childish and he makes silly expressions. I wouldn’t label Son of Kong a comedy since it does seriously attempt to follow the aftermath of Kong’s rampage through New York. Carl Denham is genuinely remorseful as he faces several lawsuits. Robert Armstrong becomes the new heroic lead as one of a few returning cast members.

Frank Reicher also returns as Venture Captain Englewood who takes Denham on a new voyage. They run into new beautiful woman Hilda in a performing monkey show. She stows away when they foolishly return to Skull Island in search of treasure. Since Little Kong is friendly, the untrustworthy Helstrom is the human villain. Denham finds closure by saving Little Kong’s life. So Little Kong fights off a new batch of man eating dinosaurs in return. Including a not as intimidating giant bear. Still it’s hard to believe the special effects look this good after only 9 months. Little Kong isn’t an endearing icon, but his watery fate is just as tragic. Son of Kong is the original unnecessary sequel. 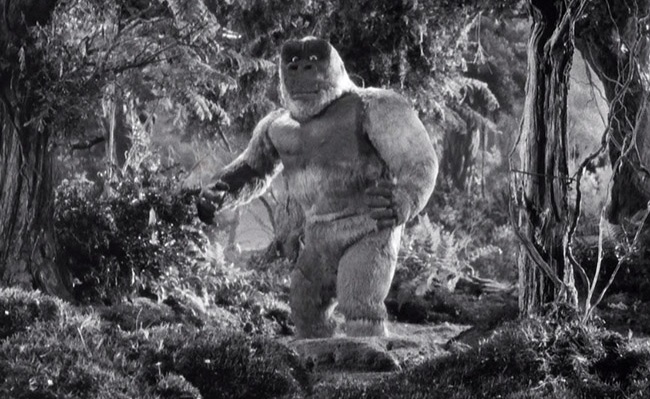 Little Kong in the jungle