King Kong Lives gave the fallen ape the second chance he never needed. King Kong has been resurrected before, but it’s kind of hard to survive a fall from two of the tallest buildings in New York. Former producer Dino De Laurentiis couldn’t settle on a single method that made sense. Director John Guillermin returned 10 years later in 1986, but King Kong Lives was hated by audiences, bombed at the box office, and holds a rare 0% on Rotten Tomatoes. Proving that even an icon as big as Kong needs a good story to back him up.

King Kong Lives is practically a lost film that I couldn’t find anywhere. My only option was to buy a cheap copy on eBay. Despite a runtime closer to the 1933 original, King Kong Lives is almost torture to sit through. Most of the 1976 climax is shown before the opening credits. Followed by the nonsensical revelation that Kong has somehow been in a coma for 10 years. Post-Terminator Linda Hamilton is a more reserved beautiful woman who isn’t the object of Kong’s affection. Not that she doesn’t get topless despite the PG-13 rating. She plays Dr. Amy Franklin, a surgeon who brings back Kong with a giant artificial heart.

More ridiculous is lesser known actor Brian Kerwin as adventurer Hank Mitchell discovering a Lady Kong. Basically King Kong with boobs. The sight of Kong interacting with a lady his own size is almost so bad it’s good. When seperated, Kong is forced to face an aggressive military and a band of hillbillies in more rural areas. Sometimes the ape suits look fine, but most of the time they look cheaper. The sequel ends exactly the way I assumed it would, with the birth of a new Son of Kong. King Kong Lives kept the franchise on life support. 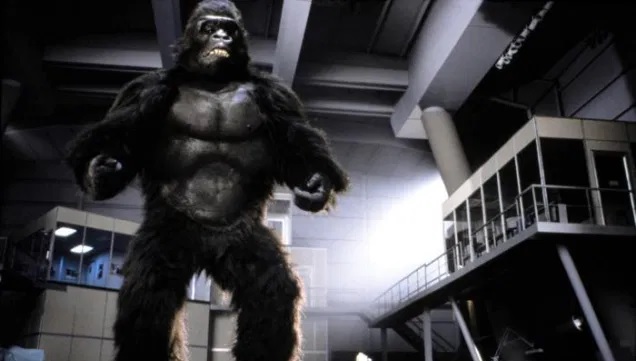