The Ghost of Frankenstein officially ran out of ideas for the long running Universal monster franchise. Although some consider Son of Frankenstein to be as good as the first 2 films, I wasn’t a fan of the new direction. I could’ve watched The Ghost of Frankenstein on my DVD box set, but I didn’t want to risk being disappointed. The fourth installment closely follows the plot of the third. Ygor is somehow still alive with Bela Lugosi reprising the role that he popularized. Boris Karloff was officially done with the Monster.

So the Wolf Man himself, Lon Chaney Jr. wore the makeup instead. His Monster retains the same iconic look, but you can tell Chaney is underneath. Villagers are fed up with the curse of Frankenstein (a decidedly better title), so they rally together to burn down his castle. The Monster somehow survived a sulfur pit thanks to his superhuman body. Ygor takes his friend to a small village to find yet another son of Frankenstein. Cedric Hardwicke is the far less insane brain surgeon Dr. Ludwig Frankenstein.

The title refers to one moment where Ludwig sees ghostly visions of his father telling him to finish his work. Chaney’s Wolf Man co-star Evelyn Ankers now plays Ludwig’s well meaning daughter Elsa Frankenstein. The Monster is still mostly mindless, but an adorable relationship with a little girl softens him a bit. He’s also sent to trial where Ralph Bellamy examines him as prosecutor Erik Ernst. Ygor isn’t as actively sinister as he was before, but he does convince Ludwig’s assistant to place his brain in the body of the Monster. Hearing Lugosi’s voice come out of the Monster is as ridiculous as it sounds. The Ghost of Frankenstein lost its spark. 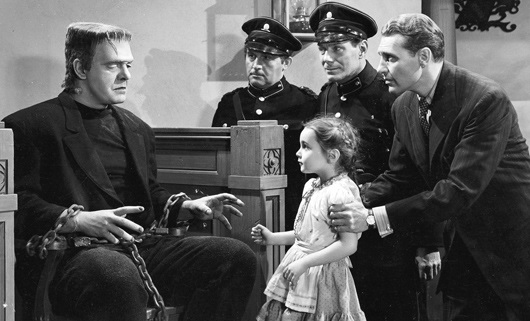 6 thoughts on “The Monster and Ygor”