The Mummy’s Curse is so rushed that it came out the exact same year as The Mummy’s Ghost. Both movies are often mixed up, but they are direct continuations. In fact, every sequel that came out after The Mummy’s Hand has more continuity than any other Universal monster franchise. Even though it’s still the weakest by comparison. Much like The Mummy’s Tomb, The Mummy’s Curse reuses footage just to fill an hour runtime. It starts out kind of different with the swamp from The Mummy’s Ghost being dug up by Southern stereotypes.

The cast is mostly cajun inspired despite the last two movies being set in Massachusetts. Then it gets repetitive again with yet another fez wearing High Priest reviving Kharis with those stupid tana leaves. Lon Chaney Jr. plays Kharis one last time and Peter Coe plays Dr. Zandaab. The only difference is an additional servant named Ragheb played by Martin Kosleck. The Mummy slowly kills more disposable characters in an effort to finally find his bride.

Princess Ananka returns played by Virginia Christine instead of the previous actress. She goes from mummy to beautiful amnesiac protected by Dennis Moore’s Dr. James Halsey and other female lead Betty Walsh played by Kay Harding. Kharis manages to take in his century old lover, but the same old betrayal ruins everything. Ragheb betrays Zandaab, Kharis betrays Ragheb, and the Mummy is buried once and for all. The Mummy’s Curse put a merciful end to the cursed Mummy franchise. 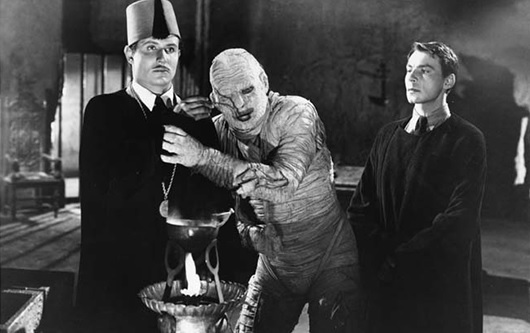 Preceded by: The Mummy’s Ghost

4 thoughts on “The Final Burial”