Ghostbusters: Afterlife finally answers the call fans like me have been waiting for. Ghostbusters III has had an especially complicated production for over 3 decades. Ghostbusters is a comedy classic, but Ghostbusters II was mostly unremarkable. The franchise was kept alive through the last 3 seasons of The Real Ghostbusters, the radical 90’s series Extreme Ghostbusters, comics, and video games. Ghostbusters: The Video Game was the closest thing to a third movie with the original cast returning. Harold Ramis, Dan Aykroyd, Ernie Hudson, Sigourney Weaver, and Annie Potts were fine with another sequel, but Bill Murray had his doubts. Let’s just pretend the 2016 female Ghostbusters never happened.

Ghostbusters: Afterlife is the true love letter to the franchise. It’s a symbolic passing of the torch since Jason Reitman assumes the directing mantle of his father Ivan Reitman. The teaser seemed to come out of nowhere, but I had hopes for the movie. After waiting another year due to the pandemic, Afterlife ended up being nostalgic without feeling like overkill. There are several callbacks to the original, but this is definitely a Jason Reitman coming-of-age style movie set in a small town. Carrie Coon is Egon’s estranged daughter and struggling single mother of two. McKenna Grace’s Phoebe Spengler is practically Egon reborn as a nerdy teenage girl. Finn Wolfhard fulfills the Stranger Things prophecy of him becoming a young Ghostbuster.

Afterlife is like Extreme Ghostbusters with an ethnically diverse next generation catching ghosts. Much like Chris Hemsworth, Paul Rudd is an MCU actor who brings the most laughs as Phoebe’s science teacher. The humor is far more natural and less desperate compared to the 2016 film. It’s fun seeing familiar tech like the Ecto-1, Proton Packs, or a P.K.E. Meter, but it’s equally neat to see features like a gunner seat or a remote controlled trap. While Silmer would’ve been a welcomed cameo, Muncher is a suitable replacement. The funniest callback is an army of mini mischievous Stay Puft Marshmallow Men instead of one big one. I think the villain choice is the only thing that could’ve been more original. Aside from that, the returning Ghostbusters are never disrespected and don’t feel like a deus ex machina. There’s even a surprise that left me a little emotional. Ghostbusters: Afterlife ain’t afraid to give fans exactly what they want. 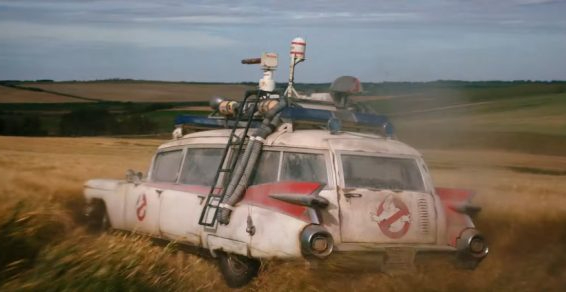 The Ecto-1 in a field

8 thoughts on “I Ain’t Afraid of No Ghost”