Ice Age: Continental Drift kept the endangered franchise from going extinct. Blue Sky Studios maintained a tradition of releasing a new Ice Age sequel after every original movie. After Rio, I was practically done with the prehistoric franchise. I was 17 and very nearly skipped seeing the fourth installment in theaters. Until I learned about the Maggie Simpson short film The Longest Daycare. Luckily Continental Drift is a minor return to form for me. The 3D effects are obnoxious, but the computer animation is more realistic than its ever been. The story is an attempt to go back to basics. Even if it is done in the most ridiculous way possible. Continental Drift refers to Scrat causing Pangea to split apart after falling to the Earth’s core. If that wasn’t bizarre enough, Scrat spends most of his time following a trail to the lost acorn abundant city of Scratlantis. Along with directly affecting the plot, Scrat ends up stuck in the same seafaring adventure as the rest of the herd.

Manny, Sid, Diego, Ellie, Crash, and Eddie got bigger when Peaches was born. Save for a quick cameo, Buck’s absence is one reason I like this movie better. Dawn of the Dinosaurs is barely referenced and Sid even points out that it didn’t make sense. Manny shifts his concern to his now teenage daughter Peaches. Keke Palmer joins an all-star cast that’s come a long way since the beginning. Josh Gad voices his first animated character Louis. An awkward molehog friend of Peaches with a crush on her. Even though she’s more interested in popular mammoth Ethan. I like the direction, but adding pop stars like Drake, Nicki Minaj, or Jennifer Lopez does feel a little desperate. Sid mostly wants to prove he isn’t a screw up. The sloth family that abandoned him finally make an appearance only to ditch their overbearing Granny voiced by a mostly funny Wanda Sykes.

Manny, Sid, and Diego are stuck with Granny on an iceberg boat that separates them from civilization. Their adventure is an obvious take on Homer’s Odyssey, right down to the use of sirens. Meanwhile, Ellie leads Peaches and the rest of the prehistoric animals to safety. Crash and Eddie are mostly around to be stupid. The first true villain since the first movie is Captain Gutt. A humorous primate pirate leading a scurvy crew of celebrity voiced animals. Peter Dinklage is joined by the likes of Nick Frost as an elephant seal, Aziz Ansari as a rabbit, and Rebel Wilson as a kangaroo. J.Lo voices Gutt’s sassy female saber-toothed tiger first mate Shira. I immediately knew that meant Diego was finally getting a love interest. Their adventure takes them across the sea through storms, an island inhabited by adorable hyrax, and away from the aforementioned sirens. It’s a fun journey even though it ends the way you’d expect. The songs are still catchy, but Ice Age: Continental Drift is beginning to show its age. 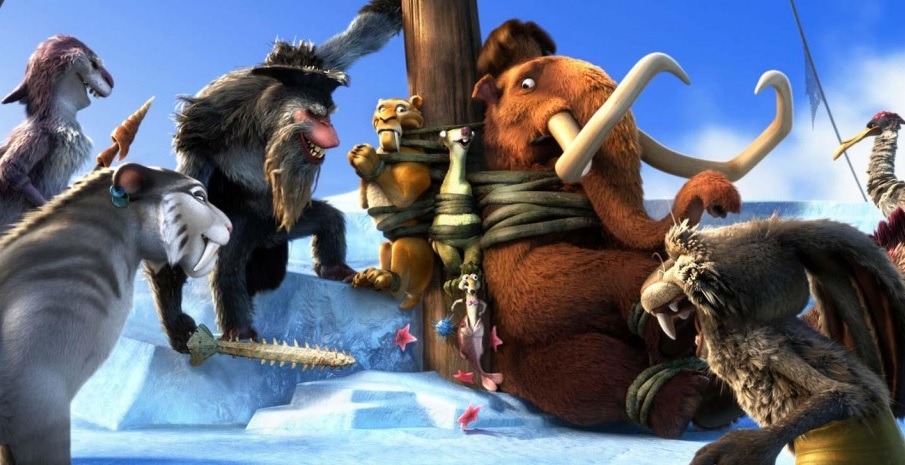