The Bounty is the last major adaptation of Mutiny on the Bounty. Unlike the 1935 or 1962 version, the Dino De Laurentiis produced film wasn’t nominated for Best Picture. Even though it has an all-star cast that includes Mel Gibson, Anthony Hopkins, Laurence Olivier, and Bernard Hill. Plus Daniel Day-Lewis and Liam Neeson before they were famous. It’s a wonder I never heard of the 1984 remake, but it is meant to be more of a reinterpretation.

The Bounty is more historically accurate and mostly inspired by the book Captain Bligh and Mr. Christian. Both characters are portrayed as friends and are given equal attention in the story. Hopkins is a very human Captain Bligh who doesn’t feel like a villain until after their stay in Tahiti. The whole movie is framed with his court martial and we actually see everything he went through adrift at sea. Gibson is appropriately masculine as Mr. Christian, but he does overact a bit when the mutiny occurs.

Their divide is caused by Christian finding love in Tahiti. Despite the PG rating, The Bounty is the only movie to accurately depict the topless women of Tahiti. I know it’s non-sexual, but they do get away with a lot of naked boobs and some pretty passionate moments between Christian and Mauatua. Christian isn’t entirely heroic in his mutiny and it’s kept vague what exactly happened on the island they settle on. The Bounty is a well produced adventure that’s probably the closest to historical fact we’re ever gonna get. 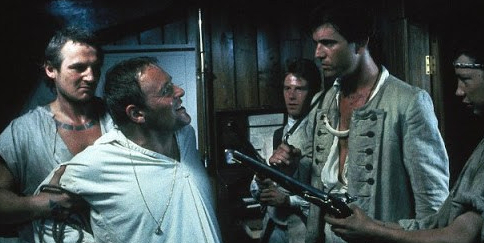