Venom doesn’t need to exist, but I guess it could’ve been worse. Spider-Man has one of the most iconic rogues galleries in comic book history. Green Goblin, Doctor Octopus, and Venom are his big three archenemies for different reasons. Green Goblin for his personal vendetta, Doc Ock for his scientific connection, and Venom for evil parallels to the hero. Venom is one of Spider-Man’s later villains not created by Stan Lee. A hulking black symbiote with a constant sharp toothed grin and a long tongue is the kind of edgy character only Todd McFarlane & David Michelinie could think of. Spider-Man’s black alien costume first appeared during Secret Wars.

Venom’s first fully formed appearance didn’t come until the 1988 The Amazing Spider-Man #300. My familiarity with the villain actually happened when I watched the 3 Part “Alien Costume” storyline from Spider-Man: The Animated Series. I was excited to see Venom in Spider-Man 3, but we all know how that ended up. I didn’t mind a reboot, but it never made sense to have Venom without Spider-Man. Especially when Marvel Studios already owned so many characters. Sony producer Amy Pascal tried to make Venom adjunct to the MCU, but Kevin Feige never seemed comfortable with the idea. I could still enjoy standalone Marvel movies since they existed since my childhood, but Venom felt like the start of something I never wanted… 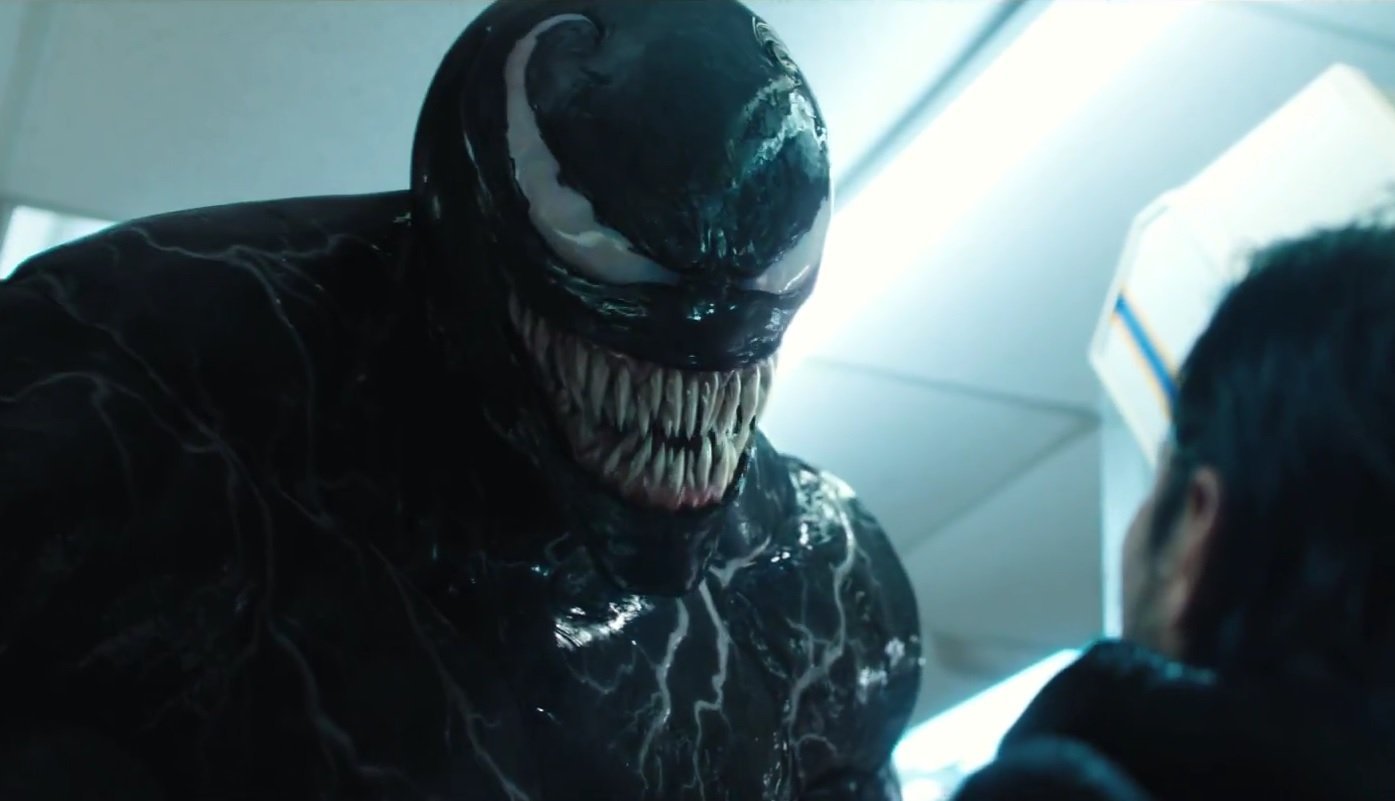 Venom is technically the first supervillain movie. Even though it turns them into the anti-hero I never wanted to see. Venom has always been defined by his hatred of Spider-Man. In most comics, Venom is an alien symbiote that attaches itself to a host and feeds off their darkest desires. When Peter Parker was infected, it led the hero down a dark path until he freed himself from its influence. Since the symbiote bonded with Spider-Man, Venom mimicked his webbing, spider symbol, and was able to block his spider-sense. Eddie Brock was a perfect second host since he hated Spider-Man as much as the symbiote did. Spider-Man 3 touched on this, but no one can take Topher Grace seriously as a scrawny Venom. Sam Raimi is mostly to blame since he never wanted to do the villain due to his “lack of humanity.” It’s actually ironic since Venom becoming an anti-hero is something that developed overtime.

The movie’s primary inspiration was the “Lethal Protector” storyline where Eddie Brock convinces Venom to fight evil in San Francisco. Although Sony wanted Tom Holland to make an appearance, Venom had to clumsily work around the heroes absence. A standalone Venom movie has actually been considered as far back as 1997. Hence why the 2018 film feels like it belongs in the 90’s. Venom is such a step back when superhero movies have progressed to the point of Avengers: Infinity War. Hardcore fans like me were disappointed, but casual audiences didn’t know any better. Zombieland director Ruben Fleischer seemed promising until Venom was revealed to have a PG-13 rating. An R rating doesn’t guarantee quality, but a monster who literally bites off heads probably should’ve been more mature. I was worried the moment I saw the horribly underwhelming teaser trailer. How could I get excited when all it showed was Eddie Brock in an MRI machine, vague narration, incomplete effects, and no sign of the titular Venom.

The first trailer made me a little more hopeful with the reveal of a Venom that practically leaps off the page. With the distracting exception of his large white spider symbol. Further trailers made me nervous again with cringy dialogue like the infamous “Turd in the wind” line. Since it had no connection to the MCU, my brother and I decided to see Venom without our parents. Unlike past Spider-Man movies, Venom is now “In Association With Marvel.” Like most iterations, the Venom symbiote arrives to Earth on a crashing space shuttle. Having J. Jonah Jameson’s son John Jameson as one of the astronauts is an interesting easter egg that doesn’t make a lot of sense in a world without Spider-Man. Unlike Topher Grace, Tom Hardy is an A list actor who actually looks like the physically imposing Eddie Brock from the comics. He went from having his face covered as DC’s Bane to having his face covered as Marvel’s Venom.

The problem is all the attention he’s given before the symbiote even takes over. Hardy’s performance is so bizarre with all his weird little ticks, whispering, growling, and an undefinable American accent. In the comics, Brock is a journalist who was discredited when Spider-Man inadvertently turned an article of his into a tabloid. Brock fell on hard times, divorced his wife, coped through bodybuilding, and contemplated suicide. The movie does none of that. Eddie is now an independent journalist with his own investigative news show called “The Eddie Brock Show.” Ron Cephas Jones is Brock’s boss who you might recognize as Bobby Fish on Luke Cage. Eddie’s successful lawyer wife Anne Weying is now his fiancée played by Michelle Williams. She’s not above franchise movies, but it does feel like she’s not taking the part too seriously.

Anne & Eddie’s relationship is given way too much attention. To the point it almost feels like a rom-com that happens to feature alien symbiotes. They break up when Eddie goes through her private files for the sake of a story. Like the “Lethal Protector” comic, Carlton Drake and the Life Foundation are the villains of the story. Brock is now discredited by Drake when the former attempts to uncover the latter’s unethical business practices. Riz Ahmed is another really good actor who lowers himself to the movie’s level. Drake has the same high and mighty motivation as other 2018 villains who want to save the planet from itself. Even if that means testing symbiotes on lower class individuals. An already tricky special effect looks even more cartoony when symbiote colors include black, grey, blue, and yellow. Most of the symbiotes have names and hosts in the comics, but the movie focuses on Venom and Riot.

Riot keeps jumping from host to host with barely any time to get to know the villain. Riot inhabits the body of Jameson, a Malaysian medic, an elderly Malaysian woman, and a little girl before they catch up to Drake. Meanwhile, Brock becomes a loser after 6 months of losing everything. Though he’s still a good guy who gives money to homeless women and has a friendship with convenience store owner Mrs. Chen. Comedian Jenny Slate plays a scientist who contacts Brock when Drake starts to go too far. Her presence is also a little distracting, but I wasn’t really thinking about her pronunciation of “Symbiote.” It’s only at the Life Foundation that Eddie finally comes into contact with Venom, but we have to wait even longer to see them in action. The first action scene is just Eddie being chased by security through a forest. The symbiote turns him into a crackhead who sweats profusely, eats chicken out of the garbage, and hears voices in his head.

The transformation is a little too similar to Catwoman. Not only does Brock act weird, but he even yells at a neighbor for playing loud music just like a scene in Catwoman. Though the “Lobster scene” doesn’t quite match the infamous “Basketball scene.” Anne is back in Eddie’s life when she grows concerned over his behavior. Her doctor boyfriend Dan helps him by scanning him with an MRI machine. Just like the comics, Venom is vulnerable to high pitched sounds and fire. Venom only makes their presence known when Eddie is in danger. Unlike Grace, Hardy’s Venom voice is as deep as it should be. I didn’t want to laugh at most of the movie’s attempts at humor, but Eddie & Venom’s Ren & Stimpy relationship is amusing. Venom unleashes his deadly tendrils from Eddie’s body in a second action scene where Drake’s mercenaries chase him through the San Francisco streets. It’s a sloppy scene with the same Rialto Theater in the background of several shots.

By this point I just wanted to see Venom, but his first appearance is pretty lame. Eddie first sees Venom in a car reflection before finally showing himself an entire freaking hour into the movie. Some fans try to defend his line about eating someone’s eyes, lungs, and pancreas, because it’s taken word-for-word from the comics, but bad writing is bad writing. Venom proceeds to bite the guy’s head off, but you can barely make out what happens. When Venom talks to Eddie face-to-face, they make a deal to work together. Eddie uses Venom to take the evidence he has on Drake to his old job. When they get caught by the police, it leads to a mostly badass action scene where Venom lets loose in a smoke filled room. Venom is horror adjacent, but it’s still far from scary. When Anne finds Eddie as Venom, she once again tries to help him. Venom in return tries to help Eddie with his love life.

Their bond doesn’t last when it’s revealed Venom is slowly killing him from the inside. Anne separates them with a high frequency and the symbiote ends up in a dog. Eddie gets captured by Drake who ended up bonding with Riot. The goofy looking grey Riot is such a lame villain considering what we could’ve gotten. His only unique trait are a variety of bladed weapons. Taking inspiration from “Planet of the Symbiotes,” Riot plans to start an invasion of symbiotes from planet Klyntar. She-Venom makes a surprise appearance when Anne temporarily hosts the symbiote. It’s a strangely erotic moment when they share a kiss that transfers Venom back to Eddie. Though Venom was originally part of the invasion, they randomly decide not to after calling himself a loser and bonding with Eddie. It’s a rushed relationship to say the least. The climax takes place at night on Drake’s launch site where Riot plans to contact their race. After Eddie drops a pointless F bomb, Venom tries to stop Riot. The CGI is so bad that you can barely make out who’s fighting who. Symbiotes merge together and Brock ends up fighting Drake hand to hand.

Eddie gets stabbed, but he obviously doesn’t die. Venom burns up when he destroys the rocket, but they also obviously don’t die. Eddie mends his relationship with Anne, but they’re still broken up by the end. Venom holds out hope and Stan Lee agrees in a surprise cameo that sadly ended up being the last one released in his lifetime. Venom only accepts the role of Lethal Protector when a thug holds up Mrs. Chen. The closing credits feature an equally edgy “Venom” song performed by Eminem himself. Even though I didn’t want to accept a Sony cinematic universe, I had to admit I was excited during the mid-credits scene. Eddie & Venom go to San Quentin prison where they visit serial killer Cletus Kasady played by busy former Ruben Fleischer collaborator Woody Harrelson. His awkward red wig wasn’t enough to distract from his chilling promise of Carnage in the sequel. Critics hated Venom, but an $8 million box-office gross was sadly enough to encourage Sony to make more movies without Spidey’s involvement. Maybe audiences were trying to fill the void left by Spider-Man’s fate in Infinity War. Of course the after credits scene is more promising (more on that one later). While I can accept the movie as dumb fun, Venom is still a turd in the wind. 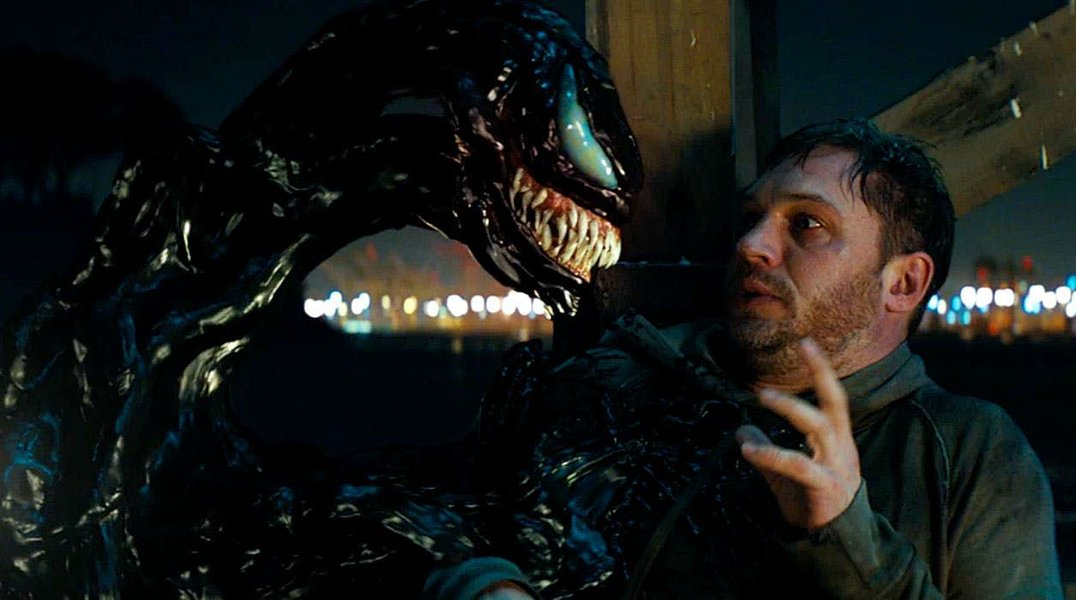 Followed by: Venom: Let There Be Carnage