American History X explores a hateful mind. The 90’s were filled with movies you just had to be ready for. American History X is an educational film, but I can’t imagine anyone seeing it in school. First time director Tony Kaye made an impression even though he sabotaged his own career by denouncing it. American History X follows a Neo-Nazi skinhead in San Diego who somehow manages to change for the better. It’s not an easy role to get right, but Edward Norton delivered his second Oscar nominated performance in only 2 years.

Derek Vinyard spreads hate, racism, xenophobia, and anti-semitism to a growing number of followers. Fairuza Balk plays his equally twisted girlfriend Stacey and Ethan Suplee goes overboard as his skinhead friend Seth. Stacy Keach is perhaps the most despicable as the older Neo-Nazi leader Cameron. Norton was so committed that he shaved his head and wore a prominent swastika tattoo on his chest. Flashbacks are shown in black & white since that’s where most of the hate is. Most of Derek’s hate can be traced to his deceased father. Derek is left with his chain-smoking mother played by an unrecognizable Beverly D’Angelo.

She causes problems by dating a Jew played by screen legend Elliott Gould. There’s also Derek’s liberal sister Davina played by Jennifer Lien and fellow Edward, Edward Furlong as his impressionable younger brother Danny. Danny idolizes his big brother, but all that changes after a very disturbing curb stomping incident. Only in prison does Derek question his entire identity. Thanks to positive black influences like his former teacher Dr. Sweeney played by Avery Brooks and down-to-Earth cellmate Lamont. Derek wants his brother to be better, but sadly life isn’t that simple. In the end, American History X offers a poignant lesson of not living a life filled with hate. 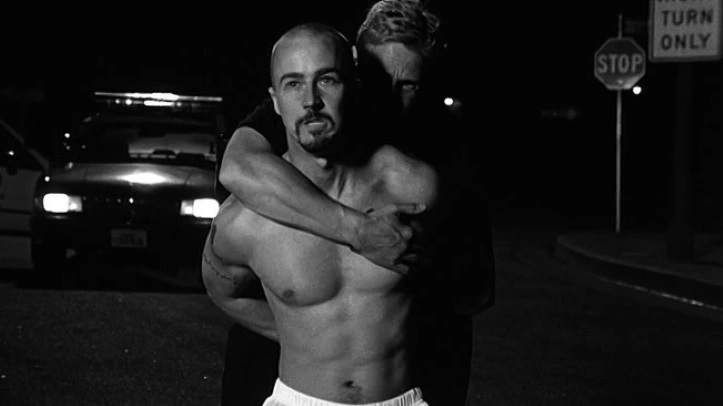 Derek is placed under arrested

2 thoughts on “A Lifetime of Hate”