Despicable Me 3 kept the franchise going despite Minion dominance. Minions was a billion dollar success, but Illumination tried to expand with The Secret Life of Pets and Sing in the same year. Despicable Me 3 came afterwards with all the same excessive marketing. I know because I must’ve seen the trailer a hundred times. Steve Carell and Kristen Wiig return as Gru and Lucy who are now happily married agents working for the Anti-Villain League. The latest villain is Balthazar Bratt, a former child star from the cancelled TV show Evil Bratt with the unlikely voice of South Park co-creator Trey Parker. Bratt is a throwback supervillain with a high-top, mullet, and shoulder pads since 80’s nostalgia is still a thing. The movie is filled with 80’s songs like “Bad.” Bratt uses expanding bubble gum and other 80’s toys to steal a priceless diamond.

When Gru and Lucy fail to bring Bratt in, they’re both fired from the AVL by the new director voiced by Jenny Slate. Steve Coogan briefly voices the former director, but he also voices a butler who tells Gru about his long lost twin brother Dru. Gru’s mother made 2 seperate non-speaking cameos before Julie Andrews finally had a reason to return. Although it’s convenient storytelling, The Simpsons did the exact same thing. Carrell also voices Dru who lives in the fictional country Freedonia, is a wealthy pig farmer, and has long luxurious hair. Russell Brand doesn’t return, so Dr. Nefario is stuck frozen in carbonite. This time it’s the Minions who want to quit due to Gru’s lack of villainy. After Minions, I was surprised by how much they downplayed their role in the movie. Mel is the lead Minion who takes most of the Minions to a singing competition and prison where they realize they miss Gru. Two Minions stay with Gru and his family who all have major subplots.

Lucy is mostly concerned with being a better stepmom to the girls. Miranda Cosgrove returns to voice Margo after finishing college. Margo learns to accept Lucy after she stops an accidental marriage proposal. Dana Gaier returns as Edith who mostly tags along with Agnes. Agnes is recast since Elsie Fisher was busy making Eighth Grade. Her replacement is a little distracting since she spends a lot of time searching for a unicorn. Meanwhile, Gru learns that Dru wants to be a supervillain and he uses it as an excuse to steal back Bratt’s diamond. They use fancy stealth suits to infiltrate his lair where they discover his evil plan to make Hollywood float into space. The climax sort of rehashes the original, but this time it’s Lucy who saves the girls. Gru and Dru learn to work together and the Minions return to help defeat Bratt. Despicable Me 3 isn’t very original, but it is a serviceable return. 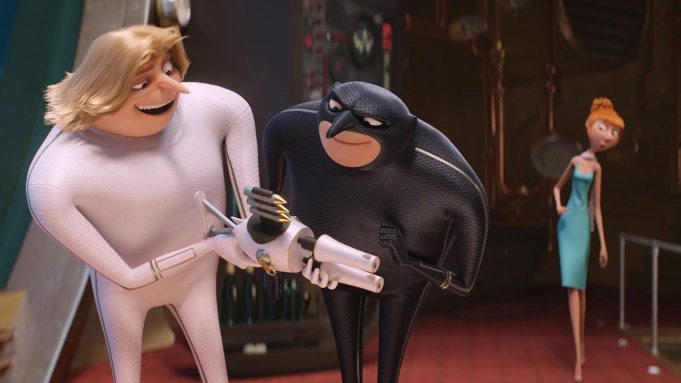 Gru bonds with his brother Dru