The Change-Up is a different kind of body swap movie. This time they’re both grown men, but they lead very different lives. Dave Lockwood is a responsible married father of three with a white-collar job in a law office. Mitch Planko is a single womanizer who takes small acting roles. Since Jason Bateman plays Dave and Ryan Reynolds plays Mitch, they’re basically playing themselves. So when they swap bodies, Bateman being more profane and Reynolds being more reserved is the only way to tell.

Since it’s a raunchy comedy, Dave and Mitch swap by peeing in a fountain and wishing they had each other’s lives. Mitch finds that he can’t handle Dave’s stressful home life and Dave ends up in increasingly awkward situations with Mitch’s women. Leslie Mann plays Dave’s frustrated wife Jamie that Mitch almost sleeps with. Meanwhile, Dave lives out his fantasy to also nearly sleep with his hot assistant Sabrina played by Olivia Wilde. Mitch is a total douche already, but even Dave ends up looking bad until they realize what they’re missing.

The Change-Up pushes the boundaries with way too much profanity, gross-out gags, and unsexy nudity. Every nude scene involved either prosthetics, body doubles, or CGI. Most of the jokes cross the line, but I’ll admit the lead actors can still get a few chuckles out of me. I really do enjoy the body swap formula, but raunchy R rated comedies don’t always work for me. The Change-Up has a good message trying to get out, but it’s bogged down by too much crudity. 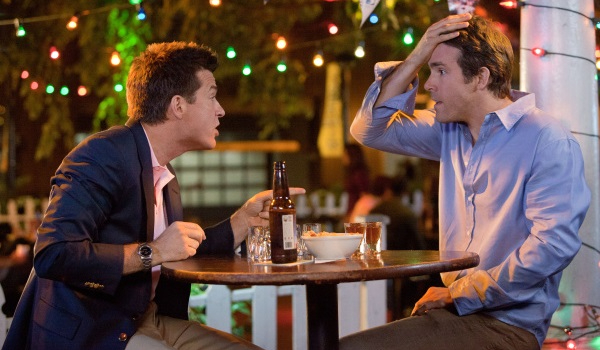 Mitch and Dave talk about their lives

2 thoughts on “From Ladies Man to Family Man”