Spy Kids 3-D: Game Over was a serious strain on people’s eyes. Its always been Robert Rodriguez goal to bring back old fashioned methods of filmmaking. So he figured he’d make the third Spy Kids movie using obnoxious 3D. Something my dad had to suffer through when he took us to see it. I wasn’t doing much better though. I remember taking off my red and blue 3D glasses at least 3 separate times. Luckily the entire movie isn’t in 3D.

Spy Kids 3-D: Game Over puts much more focus on Juni. Carmen is still around, but she takes a back seat to most of the action. After leaving the OSS in Spy Kids 2: The Island of Lost Dreams, Juni now works as a private kid investigator. He’s brought back into the spy life when an evil video game called Game Over takes over. Plunging into the game is when you have to put on your 3D glasses. While inside the game, Juni finds new allies in Rez, Arnold, Francis, and a mysterious girl named Demetra. None of whom have much personality.

Ricardo Montalbán is also given legs through digital means. Speaking of digital, the effects make up nearly 80% of the movie. There’s a racing level, a fighting level, and of course a lava level. The man pulling the strings is called “The Toymaker.” Sylvester Stallone puts in a bizarre pre-comeback performance. When the game is won, Carmen and Juni have to fight it in the real world with the help of their friends and family. Spy Kids 3-D: Game Over is a better video game than it is a movie. 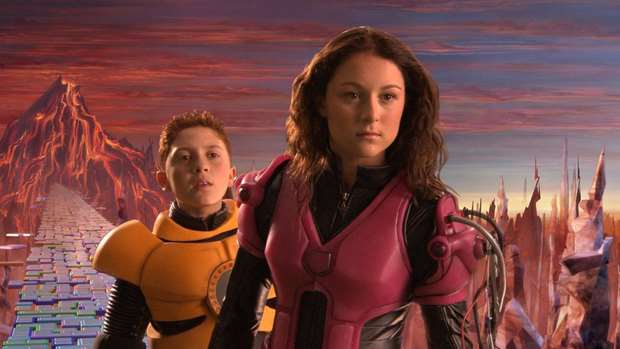 Carmen and Juni inside Game Over