After the master and mistress get married, the appliances welcome a new baby to the family. As well as a few new appliances. Things take an unexpected turn when the baby is transported to outer space and the appliances have to go to Mars to rescue him. They achieve this by attaching a ceiling fan to a laundry basket. On their way to Mars they encounter a bunch of singing balloons and on Mars they encounter advanced military grade appliances. The Brave Little Toaster Goes to Mars has an out there premise, but together it makes The Brave Little Toaster a fun animated trilogy. 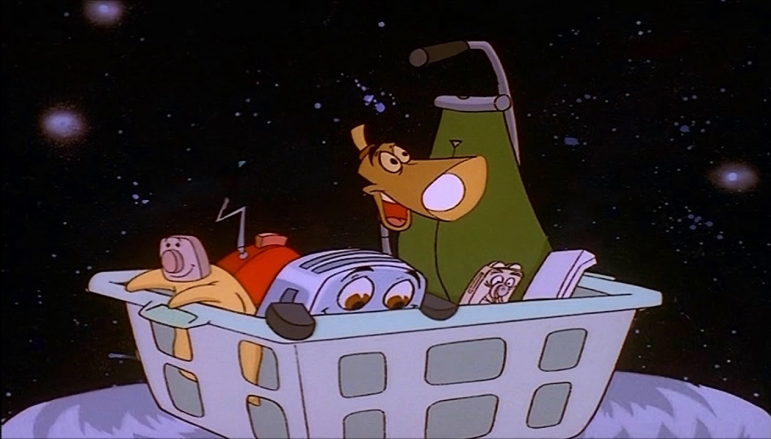 The appliances float through space

Preceded by: The Brave Little Toaster to the Rescue

The Brave Little Toaster to the Rescue takes place in college while the master is working in an animal clinic. The appliances make friends with a group of animals that can also talk. A mother cat, a chihuahua with a broken leg, a snake, and an elderly chimp. The most notable new addition being a rat named Ratso. The biggest conflicts involve a supercomputer virus and a threat against the animals. Along with a few new catchy songs. I haven’t seen The Brave Little Toaster to the Rescue as much as the other sequel, but I like it just as much.

The appliances drive off

The Brave Little Toaster follows a group of appliances in search of their long lost master. The leader Toaster, the innocent electric blanket Blanky, the happy-go-lucky lamp Lampy, the cynical vacuum cleaner Kirby, and the fast talking Radio. They’re journey begins in the forest and ends in the city. What makes it dark is everything in between. The Brave Little Toaster is one of my favorite non-Disney animated movies. I saw it many times when I was a kid. Even though it was disturbing. It came out in the 80’s, when most animated movies were darker.

Many characters act like jerks and there are moments that come almost out of nowhere. Like the Air Conditioner scene, the scary clown nightmare, the heartbreaking flower scene, the scene in the parts shop, and especially the ending in the junkyard. These scenes have a lot more meaning then I realised. Dealing with themes of consumerism and even mortality. It’s also technically a musical despite only having 4 songs. The Brave Little Toaster may have a harsh lesson to teach us, but these characters are still some of the most beloved of my childhood.

The appliances are shocked

Followed by: The Brave Little Toaster to the Rescue

Friends with Benefits is about friends who agree to have casual sex without being in a relationship. If that sounds exactly like the plot of No Strings Attached, it’s because it is. The difference being that Friends with Benefits is better and a whole lot more hilarious. Everybody is much more high energy. Justin Timberlake and Mila Kunis star as Dylan and Jamie respectively.

Dylan is an art director and Jamie is a headhunter who recruits him. So he moves to New York and starts to become good friends with her. Until he asks her to “play tennis.” Leading them to agree to have a totally emotionless sexual relationship. Part of why it’s funnier is because they take more advantage of the sex part. Most of its best jokes are in those scenes. They’re also a bit more expansive with their plot. Making it a little less predictable. Of course it ends in romance, but the road to get there was less expected.

I wasn’t looking up when a trailer came on for Friends with Benefits. So I actually did think it was No Strings Attached for a second. Strangely enough the story similarities are a total coincidence. Even though they both came out in 2011 with each starring That 70’s show co-stars (later married couple) Kutcher and Kunis. As well as Black Swan co-stars Portman and Kunis. Not to mention Kutcher Punk’d Timberlake one time. Still, Friends with Benefits just does the sex friends story better. 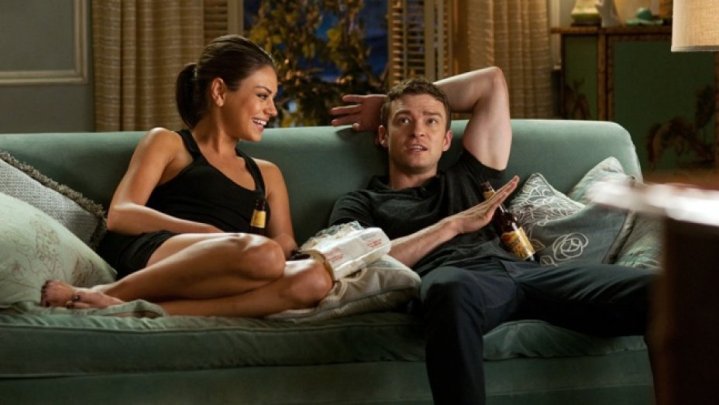 Jamie (left) and Dylan (right) have a friends with Benefits relationship

No Strings Attached is about friends who agree to have casual sex without being in a relationship. If that sounds exactly like the plot of Friends with Benefits, it’s because it is. The difference being that No Strings Attached is much slower and less funny. It’s labeled a romantic comedy, but none of the jokes really land. Everybodies very mellow. Ashton Kutcher and Natalie Portman star as Adam and Emma respectively.

They both met when they were young and they kept running into each other throughout the years. Until one day when they end up hooking up. After which they decide to use each other for sex. Hooking up whenever they have the chance. Since Emma is busy with her job as a nurse and Adam is busy with his job as an assistant on a TV set. No Strings Attached has charming leads, but I felt like they didn’t take enough advantage of its premise. The sex happens in one montage and you don’t see much of it again. Most of the focus is on the romance. Which is of course how it ends. Making it a bit more predictable.

No Strings Attached is directed by Ivan Reitman, but his later work isn’t like is older work. Though I was definitely curious when I first heard about it. I don’t regret seeing No Strings Attached, but it certainly could have been done better.

Adam (left) and Emma (right) have a no strings attached relationship

Total Recall (2012) doesn’t really need to exist. Since the original was a hard R sci-fi classic and a fun Arnold Schwarzenegger movie. Two things that should never be remade. So when I heard there was going to be a reboot, I knew it wasn’t going to be as good. That feeling grew even more when I found out Colin Farrell was going to play Quaid.

Other Arnie remakes at least tried to get somebody who matched him physically. That definitely wasn’t the only change I noticed. They dropped Mars from the story completely. A key element from the book and the original. After the Rekall implant, Quaid simply goes on the run throughout the futuristic city. Making the entire movie feel like a generic action thriller. Nothing really stands out about it, that’s how generic it is. Things like the robot woman face is replaced by a holographic face. While the whole blonde woman thing isn’t present. Since Kate Beckinsale and Jessica Biel are both brunettes.

It’s also PG-13! Which is always a bad sign for a remake to a movie remembered for being R (let alone a Paul Verhoeven movie). It’s extra confusing, because they decided to keep the three breasted woman in the movie. Even though it doesn’t make any sense without mutants. Aside from that interesting gravity elevator idea, Total Recall (2012) is a dull mess.

Quaid goes on the run

Total Recall is another Paul Verhoeven movie I probably shouldn’t have seen at such a young age. Being his follow up to Robocop, Total Recall is filled with excessive bloody violence and uncomfortable moments. Being an Arnold Schwarzenegger movie, I couldn’t resist watching it. Arnie plays Douglas Quaid, a construction worker living in the future with his wife Lori. Played by Sharon Stone 2 years before her breakout role in Basic Instinct.

In this future, people can be implanted with memories by the company Rekall. Quaid goes to them in order to receive an implanted memory of a Mars vacation as a secret agent. Since people (some of them mutated) are living on Mars in this future. It’s here that the movie really messes with your head. As it’s never made clear whether any of this is real or not. Total Recall has impressive award winning special effects and awesomely cheesy moments. It’s an Arnold movie, so expect plenty of one liners. Such as “Get your ass to Mars,” “Consider that a divorce,” “See you at the party Richter,” and “You think this is the real Quaid… it is.”

Even lines he doesn’t say are memorable. Like the robot woman disguise that says “2 weeks.” Or the infamous “corn flakes” line said by the villain. Of course there are also tense moments like the suffocation scene with the bulging eyes. Total Recall may seem like another over-the-top action movie, but it’s a lot deeper than it seems. Plus its got a three breasted woman in it! 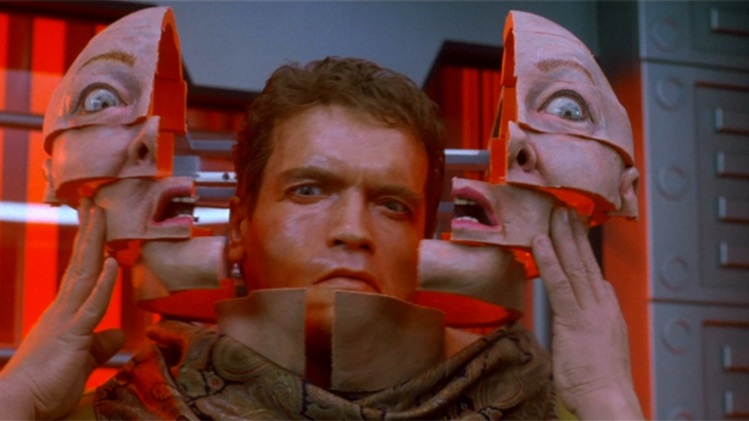 Poseidon is the 2006 remake of The Poseidon Adventure that was only made because effects have improved. I remember when this remake came out. The only thing I knew was that it was nominated for Best Visual Effects. With realistic effects used for the sinking ship and most of the disaster sequences. Apparently it even holds a record for the most detailed CGI model ever. As the ship features a boatload of detail on its exterior shots. That’s where the positive reception stops.

Since Poseidon was a disaster critically and at the box office. The basic premise of a New Year’s gone wrong is the same. The only differences are the characters and how they try to escape. While all the effort was put into the effects. Almost no effort seems to have been put into the characters. This group consists of a father who doesn’t like her daughter’s boyfriend, a guy who likes a single mother, the jerk you know is gonna die, a depressed guy, and a claustrophobic woman.

They’re all very cliché and sometimes completely unlikable. With lousy dialogue and poorly executed death scenes. Then again, just about every modern disaster movie has this problem. Almost like the 70’s was the only decade that truly understood movies like this. In the end, Poseidon prioritizes flashy visuals over heart and a powerful song.

The Poseidon fills with water

Remake of: The Poseidon Adventure

Only this time it follows the people on the outside. Specifically a group of scavengers and a group of not medics who enter the ship. When they find more survivors on the inside, the movie pretty much just becomes a redo of everything from the original, in reverse. All deaths are predictable and none of the new characters are worth caring about. Plus they add an unnecessary terrorist plot to the story. Beyond the Poseidon Adventure came at the very end of the 70’s and is essentially responsible for ending the disaster movie trend. There’s just no morning after to be found for this unnecessary sequel. 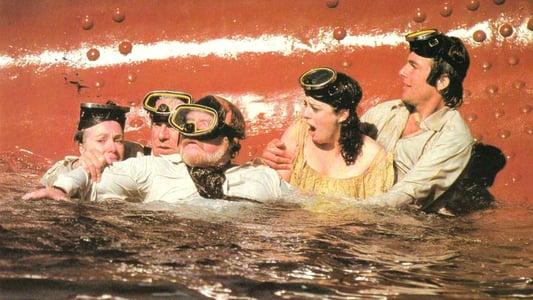 The survivors escape the Poseidon

Preceded by: The Poseidon Adventure

The Poseidon Adventure is easily one of the best and most well remembered. Its natural disaster is a tsunami (tidal wave) that overturns an ocean liner named the SS Poseidon. It takes place on New Year’s Eve and follows a small group of survivors trying to escape. Including a reverend, a police officer and his wife, an elderly Jewish couple, a girl and her kid brother, a bachelor, a singer, and a waiter. Unlike most newer disaster movies that I’ve seen, I actually cared about these characters enough to hope they make it out alive.

Most of the dangers involve trying to make it to the top while avoiding the rising water. It’s certainly impressive how they were able to turn the ship upside down. Earning the movie an Oscar for Best Visual Effects. As well as Best Original Song for “The Morning After.” An iconic song that I knew long before seeing the movie. I’ve never been on a ship, but I know if I was ever in this situation I’d do whatever I can to survive. The Poseidon Adventure is a splash hit.

Followed by: Beyond the Poseidon Adventure