Patch Adams is bound to put a smile on your face and a tear in your eye. I’m not going to act like every movie Robin Williams did was a masterpiece. The man was a supreme talent who will forever be missed. However, I think Patch Adams deserves a reevaluation. I don’t think the reviewers saw the movie as I did. I wasn’t familiar with the real life of Patch Adams before seeing the movie. So I couldn’t watch the movie with that prior knowledge. So my review is purely based on what I saw. Hunter Adams is a suicidal man who’s just checked into a mental hospital (don’t worry, he doesn’t stay long). After gaining the nickname “Patch,” he decides to upgrade to a real hospital by applying to medical school. Patch Adams learns he has a gift for making people, especially children, laugh. Robin Williams is his usual charming self. At first you think you’re watching a purely comedic film, then suddenly *bam!* the movie gets really depressing really fast. I won’t say what happens, but I’m positive you’ll cry. Most critics gave Patch Adams a hard time for either being too sappy or not faithful enough to the source material. What’s wrong with being too sappy? I think the critics could all benefit from a little excessive happiness.

The Monster Squad is a profane, overly violent, innuendo filled 80’s kids movie. I’m familiar with both genres the movie is trying to juggle. The cliché filled boys only adventure group movie. And the classic Universal monster team up movie. They don’t really blend well together. It’s hard to know what the demographic is, because of the PG-13 rating. Every kind of 80’s trope is being exploited here. Plus the movie is only an hour and 22 minutes long. To be honest, it doesn’t really leave that big of an impression. Not that it isn’t so bad its good. The monster makeup is alright and the action is pretty creative. I wouldn’t read too much into it. If you like classic movie monsters, then The Monster Squad is worth its short runtime.

The monsters: (left to right) Gillman, Dracula, Frankenstein, The Mummy, and The Wolf Man

EuroTrip is a trip worth taking. I actually do enjoy the occasional raunchy teen comedy with a lot of gratuitous nudity. As long as it’s done a certain way. EuroTrip does many things right in my opinion. “Scotty doesn’t know” will forever be stuck in my head. If you know what you’re getting into, then you know to expect drug, sex, and dancing robot jokes. There are lots of scenes I thought were hilarious (not every joke though). Most of which involve culture clash in many European countries. The language is actually a bit few and far between, which is a plus for me. There’s at least 12 instances of nudity in the movie, both male and female. I only had a problem with the male nudity. There’s a nude beach scene you might want to avert your eyes for. Other than that, EuroTrip is a pretty entertaining movie. Not for the easily offended.

Girl, Interrupted is what happens when a single performance overshadows an entire movie. More on that later. Girl, Interrupted is based on a memoir about a woman’s stay in a mental institution. I’ve talked about my opinion of mentally disturbed people before. I usually find it fascinating, but Girl, Interrupted falls short on delivering. It’s no One Flew Over the Cuckoo’s Nest. The first half of the movie has flashbacks that seem a little unnecessary. The mental institution doesn’t feel realistic enough. The girls kind of run around and do whatever they want. Plus it feels longer than it has to be. But enough about the bad, let’s talk about the good. Angelina Jolie hijacks the movie every time she’s on screen. She plays the perfect balance of crazy. She can be subtle, seductive, manipulative, and even downright insane. Angelina Jolie actually won Best Supporting Actress for the movie (despite the fact that it has a 54% on “Rotten Tomatoes”). I love Winona Ryder, but Angelina Jolie is the only reason you should watch Girl, Interrupted. 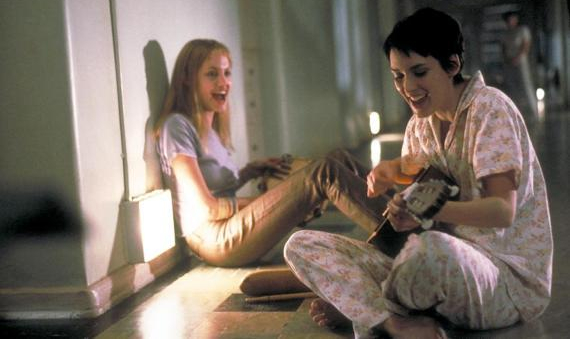 Susanna (right) and Lisa (left) cheer up one of the patients

Forbidden Planet is one of the movies we have to thank for the progression of science fiction. When I was a kid my parents had a collection of VHS tapes. One of the movies was Forbidden Planet. I always thought the poster/cover looked really cool. A robot on an alien world carrying an unconscious woman. So I was curious to check the movie out. Leslie Nelson stars in a much more dramatic role then the comedic roles he’d be known for. Forbidden Planet also has many firsts. It was the first movie to depict space travel that’s “faster-than-the-speed-of-light.” The iconic character Robby the Robot was the first robot to be an actual character in film. It’s also the first movie to take place entirely on a different planet. So yeah, Forbidden Planet did a lot. It’s been so long since I’ve seen it, but I remember enjoying it. Forbidden Planet is a must for sci-fi fans.

Gravity is a seriously terrifying situation. Gravity takes place in space, stars only Sandra Bullock and George Clooney, and is only an hour and 30 minutes long. Gravity caught all our attention when we saw the first trailer. The idea of hopelessly floating through space sounds horrible. Its sort of similar to being afraid of heights. Gravity succeeds with impressive visuals. If I could make a list of movies I wish I saw on the big screen, Gravity would be at the top of the list. You have to watch it on a big screen. I wasn’t too sure about the movie, because I knew Sandra Bullock would be carrying the whole movie. I know she’s a terrific actress, but this seemed like a strange choice. Of course she kills the role. Gravity is a very tightly packaged story. By the end, Gravity accomplishes everything it’s trying to accomplish. So don’t expect much of earth. That’s not the point. Expect to be on the edge of your seat at all times, staring in awe at the breathtaking visuals.

Dr. Ryan Stone floats through the endless vacuum of space

Warcraft is what happens when you do everything right, but still fail. Based on the online game World of Warcraft, Warcraft manages to recreate locations, characters, weapons, and even lore. What went wrong exactly? The answer is quite simple. Every single movie based on a video game is going to suck no matter what. There has never been a good movie based on a video game (ever!). Warcraft focuses on two specific races, human and orc. The humans are boring and uninteresting. The orcs on the other hand, are much more interesting. The effects look like they were taken straight out of the game. Which isn’t a bad thing cause they look pretty realistic. Unlike most video game adaptations, Warcraft was directed by someone who actually cares about the source material. So many other adaptations missed the point of the game entirely. The movie fails for being too slow, having lazy performances, and for feeling more like the set up to a franchise. And I have played World of Warcraft before. Why watch a 2 hour-long cut scene when you can play for hours on end.

Durotan of the Orc Horde

I first watched Freedom Writers when I was in the 8th grade. My social studies teacher showed it to us as part of a lesson. I can’t recall the reason, but there was one scene in particular he showed us. I think he was teaching us about race relations or something. I didn’t see the full movie until a year or two later in a different school year. I always thought Freedom Writers was much older than 2007. It feels like an early 2000’s movie. But enough about that. How does Freedom Writers hold up? I think it’s the perfect movie to teach in the classroom. Based on a true story, Freedom Writers tells the story of a white teacher who inspires her multicultural students to express themselves. They write things down in a diary and learn about the Holocaust. The main difference between the movie and real life is how the actors look. Hillary Swank is a bit more Hollywood pretty then the teacher she’s portraying. I think they also simplify the stories a bit just to save time. When it comes to movies about race, I prefer movies like Freedom Writers. That are straight forward, easy to watch, and make you feel good.

From Dusk Till Dawn wasn’t at all what I was expecting. By this point everyone knows that there are vampires in the movie. What you probably didn’t know is that the vampires don’t show up until halfway through the movie. Before then, there isn’t even a sign of the supernatural. From Dusk Till Dawn starts out like a genuine crime thriller. There’s a hostage situation and characters that would be considered bad guys. I haven’t seen many R rated Robert Rodriguez, but if they’re anything like this, I’ll have a hard time sitting through them. It didn’t really get good for me until the vampires showed up. And when they do show up, its completely out of nowhere. Which makes me think they should have tried to keep it a secret in the marketing for the film. If you like this sort of Quentin Tarantino/Robert Rodriguez style movie, then I guess I’ll recommend it. I probably won’t be seeing it again though. 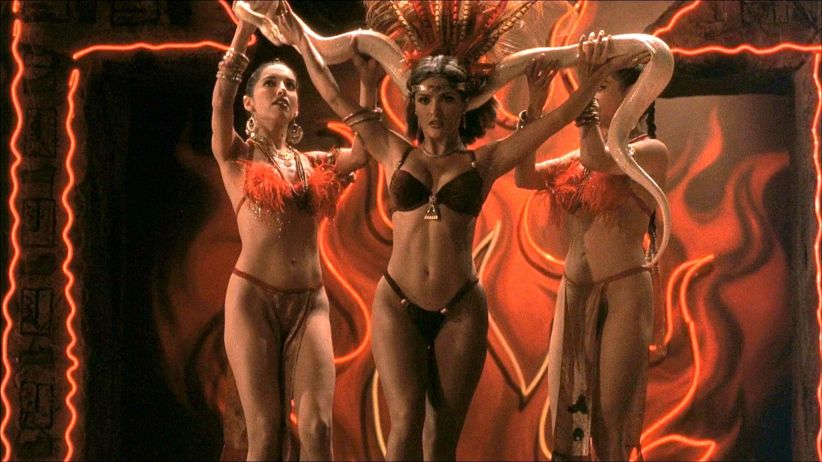 Santanico Pandemonium draped in a snake