Friday the 13th Part VIII: Jason Takes Manhattan is perhaps the dumbest idea for a sequel in the entire franchise. Even the title sounds like Jason has quit killing to star on Broadway. Despite how stupid the movie sounded, it was still a sequels I looked the most forward to seeing. Jason is once again at the bottom of Camp Crystal Lake after the end of Friday the 13th Part VII: The New Blood. He’s again revived by electricity, but this time he boards a boat full of occasionally nude semi-sex crazed teenagers on their way to New York City.

You’d think Friday the 13th Part VIII: Jason Takes Manhattan would skip the boat trip and go straight to New York, but you’d be dead wrong. This entire movie is complete false advertising. The first and second act takes place almost exclusively on this boat. Oh yeah, that makes sense for a movie that literally has “Manhattan” in the title. When they finally get off the boat after several kills, things just get way more ridiculous and almost cartoonish. Like Jason punching off a teens head in a one sided boxing match.

Plus I realize New Yorkers are distracted, but seriously, nobody cares that there’s a machete wielding maniac walking around Times Square. SPOILER ALERT! Rennie is the final girl because she somehow encountered Jason when he drowned as a kid. What makes less sense is her seeing a ghost of his younger self. Don’t even get me started on Jason’s face and illogical “death” by sewage. Friday the 13th Part VIII: Jason Takes Manhattan should have been enough to kill the franchise for good. 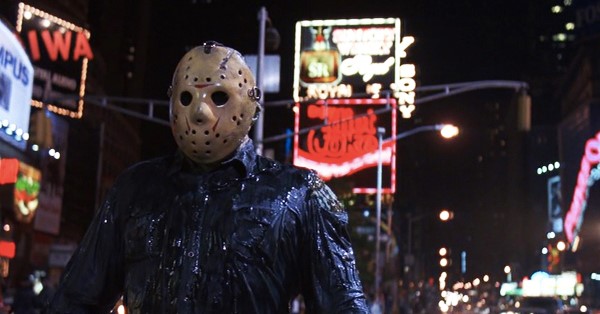 Preceded by: Friday the 13th Part VII: The New Blood & Followed by: Jason Goes to Hell: The Final Friday

2 thoughts on “A Long Boat Trip (Followed by New York)”