A Good Day to Die Hard is what happens when a beloved action franchise dies… hard. The first warning sign was the ridiculously dumb title. “A good day to die” doesn’t sound better by sticking “Hard” to the end of it. Live Free or Die Hard was a much cooler title. Their mistake was not repurposing an existing story. Without an already established work to fall back on, the writers prove just how uninspired they can be. Detective John McClane in Russia. That’s about it. The second warning sign was the incredibly cheesy tagline “Yippee-Ki-Yay Mother Russia.” The action packed trailer was the only thing that made it look promising. Until the worst Die Hard movie ever made actually came out. A Good Day to Die Hard now centers around McClane’s other briefly seen child. His son whom he thinks is a criminal in Moscow, Russia. He’s actually an annoying CIA agent protecting a whistleblower. So McClane helps his estranged son fight off a far less memorable group of terrorists. Most of the action doesn’t stand out and those that do are completely illogical. It’s clear that Bruce Willis just doesn’t care anymore, but that’s no excuse to give Jai Courtney the spotlight. He can’t hold a movie to save his life. Still, Willis is practically sleepwalking through his performance. There’s no sincerity behind his famous catchphrase anymore. The self contained Christmas classic seems so long ago now. It may have brought back the R rating, but A Good Day to Die Hard is the furthest thing from a Die Hard movie. 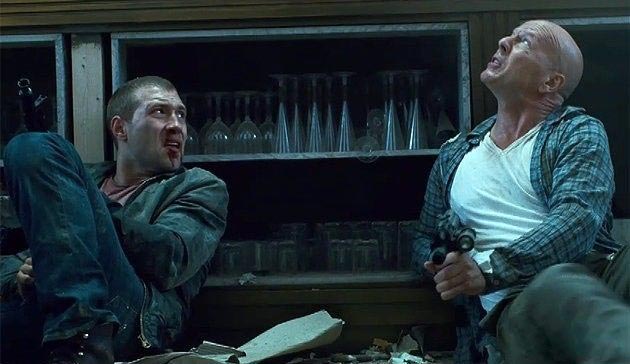 John McClane fights with his son